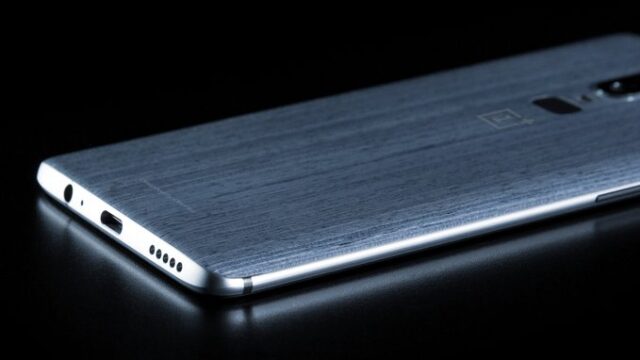 A leaked image of an OnePlus device and believed to be that of the OnePlus 6 has sent its fans in a tizzy. The image courtesy of Evan Blass (@evleaks) however depicts only the rear bottom portion of the phone but does reveal some interesting features.

Primary among those is of course the rear finish that sports a wooded texture and does look absolutely stunning. The company in any case has on offer wooden textured rear back cases and has been quite popular as well. Maybe that prompted them to integrate the style right onto the phone’s rear itself with their next flagship.

Among the other aspect that catches our attention include the presence of the 3.5mm headphone jack at the bottom. That should be of immense delight to fans of the old-school connectivity slot, more so when several other manufacturers have opted for Type-C slots instead while some continue to debilitate on the issue. Seems the Chinese manufacturers has made up its mind on this and should be great news for many out there.

You've been **cough cough** good sports with this, so I suppose you do deserve /something/. Just remember: #yousawitherefirst pic.twitter.com/AWCHYZKJJE

Mention must also be made of the rear mounted fingerprint scanner. However, the biometric sensor is seen sporting a rectangular shape in the OnePlus 6 and is a departure from the circular structure seen on the preceding phones. Interestingly, the presence of the rear mounted scanner is also an indication the forthcoming flagship will miss out on an under screen fingerprint sensor, something that was being speculated earlier.

The bottom also reveals a single speaker grille and USB Type-C port, apart from the headphone jack of course. The bottom is also seen to have been set at a slight offset angle, which makes for an interesting design decision considering that most handsets sport rounded or curved edges.

The sides meanwhile are seen to be slightly tapering off along the edges, much along the lines of the flagship Galaxy handsets. A single side mounted button is also visible and could be either the volume rocker switch or the power button.

Overall, the OnePlus 6 seems to have a showstopper in the making, one that is already making waves. In a related development, the company has already discontinued the OnePlus 5T in the US. That coupled with the emergence of the official looking image of the OnePlus 6 handset has led many to speculate if the device is being readied for launch sometime soon. The company had earlier pegged the launch to happen sometime around second half of 2018.