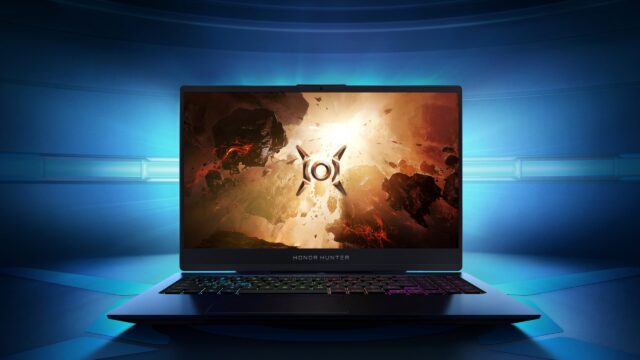 Honor announced the launch of its new Hunter V700 gaming notebook at its Honor Smart Life conference held in Beijing, China. The Hunter V700 is also the first gaming notebook to grace Honor’s product portfolio and comes with a unique design that makes it among the lightest and thinnest in its category.

Honor said the new Hunter V700 has been crafted out of premium aluminium alloy having a ‘sleek and streamlined profile’. Also, while the notebook mimics the proportions of typical 15.5-inch laptops, the Hunter V700 comes with a 16.1-inch display while having 4.7 mm bezels on the sides. The display boasts of a resolution of 1920 x 1080 pixels and has a wide colour gamut of 100 percent sRGB. Other salient features of the notebook include a contrast ratio of 1000:1 and 300 nits of brightness.

Also, while the notebook measures just 19.9 mm at its thickest point, it comes with a wide range of ports for ease in operations. Those include one USB 2.0, one HDMI 2.0, two USB 3.2, and a Type-C display/data port. There is a 3.5 mm audio port as well, as is an RJ45 ethernet port.

Coming to the processor, the new Hunter V700 comes powered by the 10th generation Intel Core i7-10750H CPU and NVIDIA GeForce RTX 2060 with 192-bit 6 GB GDDR6 memory for the most efficient graphics processing capabilities. You can also opt for a model having 10th gen Intel Core i5-10300H processor and NVIDIA GeForce GTX 1660 Ti GPU as well for a more affordable option.

The rest of the specs include up to a max of 16 GB DDR4 memory which again is user-upgradeable to 32 GB. For storage, there are two NVMe SSDs for a total storage volume of 1 TB.

With that much of processing firepower, one of the biggest concerns here is with heat produced. However, Honor has done a fine job with the Hunter V700 which comes with a unique Wind Valley designed heat dissipation panel that retracts when the display is closed and deploys again when the display is opened.

Honor said the mechanism has been thoroughly tested to work effectively even beyond 50,000 opening and closing operations. Also, with the vent deployed, the air intake volume enhances by 40 percent. This, coupled with a pair of powerful 12V fans, does a great job of keeping the temperature at check while allowing the processor to sustain peak operation for a longer duration.

Pre-orders for the Hunter V700 is currently being accepted in Mainland China where it is priced RMB 7499.