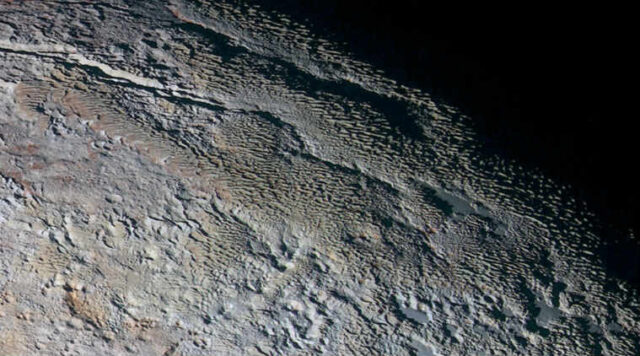 Penitentes are unusual ice formation which is formed in high altitudes particularly above 4000 meters and can measure from a few centimeters to 15 feet. Penitentes was discovered on Europa, a moon of Jupiter and now on Pluto. Latest data sent by the New Horizons hint that the structures can be seen on Pluto also.

The genesis of the word Penitentes is the Spanish word Penitente which means pointed snow. The term was first coined by the great scientist and the father of evolution theory Charles Darwin who first mentioned it during his travels in South America. The name also comes from the peculiar pointed hat worn by the Priests in the processions during the Spanish holy week

Using a model much akin to those which are used by meteorologists to forecast weather and a computer simulation of sublimating ice, scientists were able to create conditions much akin to those on Pluto and found evidence of formation of Penitentes.

Penitentes are formed when ice sublimes and take place at temperatures just below freezing point. Until now these were seen only on Earth, but now it has been proved that they are also present ion other heavenly bodies.

Lead researcher from York University, Toronto, Canada, John Moores stated that terrestrial models had shown it to occur in other planets also. However, the conditions on Pluto or Europa are much colder, and the ice is not formed of water but instead of Methane and Nitrogen. However, the same laws of physics come to play here, and the penitentes are formed.

The structures on Pluto are much larger and about 500 meters and are separated by three to five kilometers. These massive structures are formed on the same principles which precipitate their formation on Earth.