Home News Motorola Moto G4 Plus Vs LeEco Le 2: Which one should you... 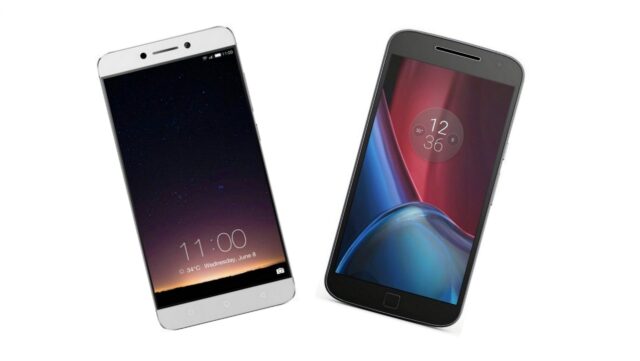 This year, the Indian smartphone market has been blessed with some of the best mid-range devices ever. Manufacturers like Xiaomi, LeEco, Motorolla and Asus have brought their best mid-range offerings in the country. Today we try and compare the Motorola Moto G4 Plus and LeEco Le 2, two of the best of the lot and find out who gets you more bang for your buck.

Motorola Moto G4 Plus Vs LeEco Le 2: RAM and Memory

In India, both the smartphones come equipped with 3 GB of LPDDR3 RAM along with 32 GB of internal storage capacity. The G4 Plus has a dedicated microSD card slot which can take in up to cards up to 256 GB capacity. Le 2 does not support microSD cards.

There is also another variant of G4 Plus with 2 GB RAM and 16 GB inbuilt memory, but we are only taking into account the 3 GB variant just for the sake of comparison.

The G4 Plus is powered by 64-bit octa-core Snapdragon 617 SoC. The processor has eight ARM Cortex A53 cores with four of them clocked at 1.5 GHz each and other four at 1.2 GHz each. Adreno 405 GPU manages the graphics in the handset.

On the other hand, LeEco Le 2 houses a 64-bit octa-core Snapdragon 652 chip. This has four ARM Cortex A72 cores, each running at 1.8 GHz and four Cortex A53 cores clocked at 1.4 GHz each. The graphics performance handled by the Adreno 510 GPU.

Winner – Le 2 is the winner here by a large margin. The Cortex A72 core is ARM’s flagship CPU architecture and just demolishes the A53 cores of the G4 Plus in terms of performance. The Adreno 510 of the Snapdragon 652 is also a newer generation and is much more powerful.

The rear cameras of both the devices are identical 16 MP with the Moto G4 Plus featuring an advanced laser autofocus capability on top of Phase Detection Auto Focus. The Le 2 comes with only the PDAF technique. Both of the smartphones feature dual LED flashes and face detection.

Motorola Moto G4 Plus has a 5MP front camera while the LeEco Le 2 sports a better 8 MP selfie unit.

Winner – Le 2 is the winner here. Even though having a great camera module and better auto focussing technique, G4 Plus loses out here due to the substandard SoC and inferior front camera.

Motorola Moto G4 Plus Vs LeEco Le 2: Battery and connectivity

Both the smartphones come with all general connectivity options. Le 2 supports dual band 2.4 GHz and 5 GHz Wi-Fi while the G4 Plus is restricted to only 2.4 GHz WiFi band. The former also features the latest Type-C USB port while the latter has the traditional microUSB v2.0.

The Motorola Moto G4 Plus and the LeEco Le 2 come with a similar set of features. Both the smartphones can take in two SIM cards. They support 4G LTE with VoLTE (Voice over LTE) and are compatible with all of the 4G network bandwidths in India. The Motorola G4 Plus features Cat4 LTE and maxes out at 150 Mb/s download and 50 Mb/s upload speeds. However, the LeEco Le 2 comes with a higher end Cat7 LTE chip and can download with a speed of up to 300 Mb/s and upload at up to 100 Mb/s.

Winner – LeEco Le 2 is the winner here due to its support for higher speeds through 4G LTE.

LeEco sells its Le 2 at Flipkart and its online marketplace, LeMall. The smartphone only has a 3 GB/32 GB model and costs Rs. 11,999.

Winner – Le 2 wins here hands down with having a price which is Rs. 3,000 less than that of the similarly equipped G4 Plus.

As we can see, LeEco’s offering is significantly better than that of Motorola’s. The former beats the latter almost in every aspect. On top of that, Le 2 cost nearly 20 percent less than that of the Moto G4 Plus. We want to clarify that, even if the smartphones came at the same price tag, the winner would have remained the same – LeEco Le 2.