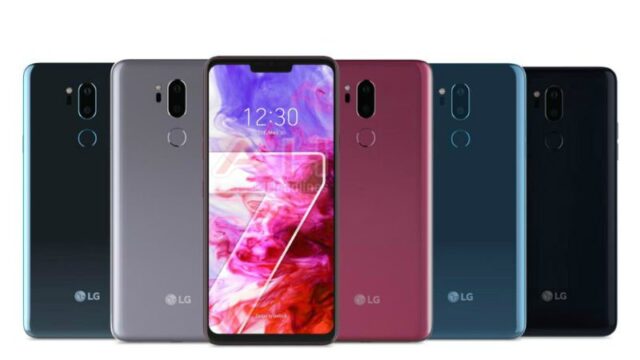 It has almost become customary for smartphones to get revealed almost in its entirety before the official launch actually happens. We have seen that happen with the Galaxy S9 in recent times and the new LG G7 ThinQ is the newest to conform to that trend. So while LG has confirmed the launch of the G7 to take place on May 2 at an event in New York, here is a brief summary of what the latest leak has revealed.

What is being discussed here is the official press render of the upcoming LG flagship which Android Headlines have got hold of. No wonder there is a wealth of official information that has come to the fore though most of that largely confirms what we already know via previous leaks.

Among everything else that the leaked press renders have revealed include the color options you will have with the phone. And it is quite a colorful palette out there what with the G7 set to be available in Raspberry Rose, Moroccan Blue with glossy finish, Moroccan Blue (Matte), Platinum Grey, and Aurora Black.

While black is the most common color for smartphones, Raspberry Rose does look fresh and stunning, to say the least. Unfortunately, it is again Black that would be the most common and is likely to be widely available in most regions. Other more exotic color choices might be limited to certain parts of the world only.

The images also reveal the notch though interestingly, the display does not actually extend all the way to the edges. Instead, while there is a small chin at the bottom, the top too has a thin bezel with the central portion culminating into a notch. Wonder why LG opted for the contentious design theme when it could accommodate the sensors and camera within the top bezel itself. There is a wide ranging feeling against the notch among smartphone buyers ever since Apple first introduced it with the iPhone X.

The rear meanwhile hosts the vertically aligned dual camera lenses with the circular fingerprint sensor placed just beneath it. Flanked on the side of the camera is the LED flash while the camera too is believed to feature f/1.5 aperture. Other bits and pieces that we know of the G7 include a Snapdragon 845 chipset coupled to a 6 GB RAM and 64 GB of starting storage option.

Watch this space for more on the topic as it becomes available.