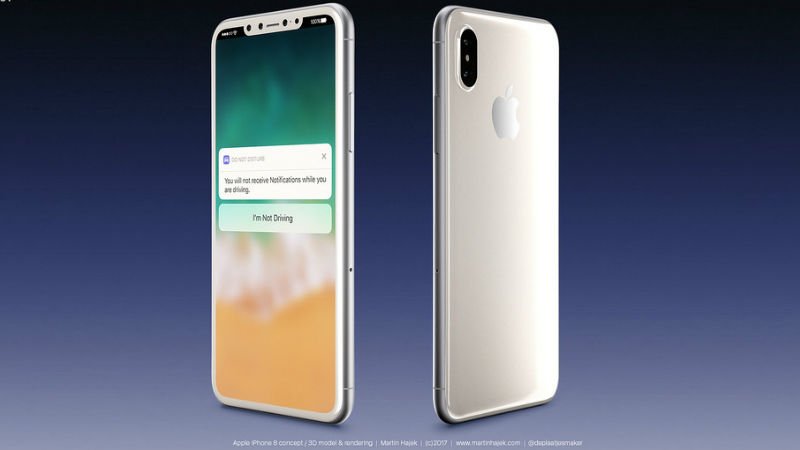 Apple is likely to unveil the next gen iPhone, the iPhone 8 on September 12. The iPhone 8 has been subjected to numerous rumors and leaks in recent times. And now according to the latest image leaks from Bloomberg, has suggested that iPhone 8 will adhere a gesture control instead of a physical home button. The phone also packed with front and back glass construction with Stainless Steel edges.

According to the report, The next gen iPhone will be featured with a thin software bar at the bottom of the screen from which users can unlock the phone by dragging it in the middle. The gesture control will allow users to avail multitasking with multiple apps and return to the home window. Moreover, it is also very likely that this time Apple might opt for 3D facial recognition technology in place authentication.

However, previously there was a leaked video which recently surfaced online showing that the Touch ID fingerprint is embedded in the Apple Logo. The iPhone 8 is expected to come up with iOS 11 and a wireless charging technology. as previously prominent accessories maker launch a wireless charging dock for the phone. The dock provides the charging up to 10W power which quite low as compared the LG and Samsung charging dock.

To recall, The phone is likely to sport a 5.1 inches OLED 3D Touch display. The phone will also come with Quad core Apple A11 processor which may pair with 3GB of RAM. The smartphone may come in three ROM variants i.e. 64GB/256GB/512 GB. The iPhone 8 may come with a 12MP rear sensor which comes with f/1.8 aperture, OIS, and quad-LED (dual tone) flash. While on the front, there will be a 7MP optics which comes with F/2.2 aperture, HDR, and panorama.