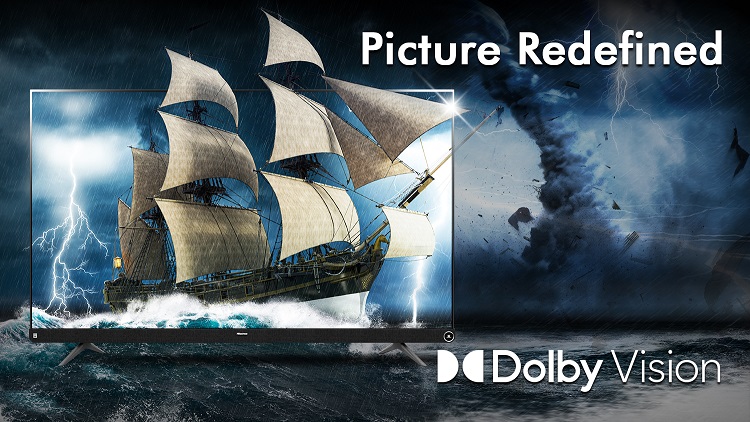 Hisense launched its first Tornado 4K series TV in India which the company said has been made exclusively for sale in the country. The 55-inch TV which has also been manufactured in the country offered unmatched levels of visual and sound clarity but in an ultra-slim package.

Running Android TV 9.0 PIE, the new Tornado 4K TV comes integrated with Google Assistant for smart voice control and other smart AI features. The TV also comes with a host of advanced technology for a mesmerizing viewing experience. For instance, there is the Dolby Vision HDR tech that automatically optimizes the content scene-by-scene to have the best and life-like pictures shown each time.

Similarly, there are other technologies at work all of which has the end result of having the best possible picture displayed every time. Those include Ultra Dimming technology and Smooth Motion technology. The Ultra Vivid High Contrast Panel delivers brighter whites and darker blacks for sharper contrast.

What’s more, the Tornado 4K TV supports HDR10+ decoding, HDR10, and HLG as well. Then there is the UHD AI Upscaler as well that converts FHD content into UHD format. There is an in-built Game Mode too for the ultimate gaming experience while the Noise Reduction technology offers a clean output image after analyzing and removing noise from the input signal.

The Tornado 4K TV comes equipped with a front-firing JBL six-speaker system comprising of four full-range speakers and a pair of high-frequency speakers. All of it is capable of delivering 102 W sound which should provide for a movie theatre-like experience right in your home, more so given the Dolby ATMOS technology that ensures you have even the minutest detail reaching your ears.

Among the other features of the TV include its integrated Chromecast and dual-band Wi-Fi support, with the latter allowing for 5G speeds for steaming even 4K content with ease. The remote is voice-enabled too and offers One Touch Access to apps such as YouTube, Netflix, and the like.

For ports, there are three HDMI 2.0 ports and a pair of USB ports to connect to external devices. Plus, there is the Bluetooth Audio Out feature as well to connect to wireless headphones.

The new Tornado 4K TV is now sporting an inaugural price tag of Rs. 44,990 and is available from Flipkart, Amazon, Reliance Digital, and TataCliiq starting December 24, 2020, onwards. The company is also running a Tornado Challenge Contest as part of its TV Redefined launch campaign wherein the winner stands to win the 55-inch 4K TV for free.

A keen tech enthusiast who loves to keep a tab on the tech scene, with special emphasis on things like smartphones, tablets, laptops, convertibles and such. Cars happen to be his other passion, not to mention the recent trend here comprising of electric cars and autonomous cars. Off late, he has also started tinkering a bit with stuff like electronic circuits, electric motors a bit though he's just a novice there.
Website: https://pc-tablet.com
Posts created: 582

Samsung Galaxy S21 rumors, all that we know so far