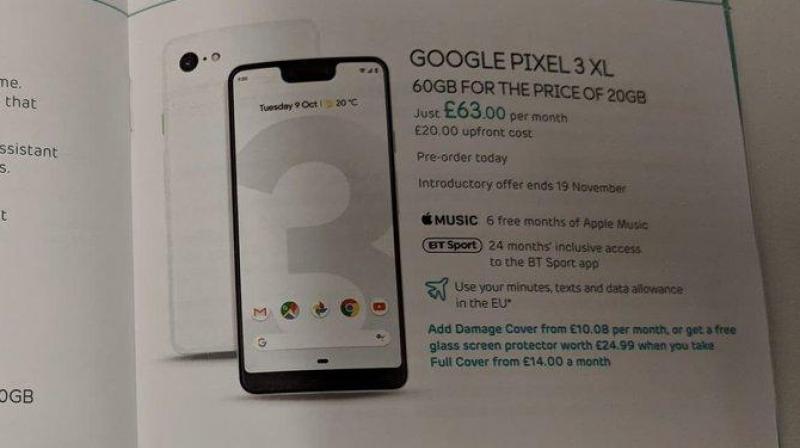 Google Pixel 3 series is expected to go official at an event on October 9. Past leaks about the handsets have left no stone unturned, as pretty much everything has been revealed about he upcoming Pixel 3 and Pixel 3 XL. With just a few days to go before Google’s big hardware event, a leaked magazine advertisement has revealed some new features that were mostly unknown before.

To begin with, the advert shows the Pixel 3 XL sporting that rather infamous notch. The handset has a rather huge notch, with clearly noticeable bezels around the display. The smaller Pixel 3, however, looks like a shrunken version of last year’s Pixel 2 XL. Both handsets can also been sporting a stereo speaker setup and a dual front camera setup.

The leak further suggests that dual camera setup on the front will have one sensor for normal selfies and one for wide angle selfies.

Besides, the leak also mentions some nifty software features. As the advert mentions a feature called Top Shot mode, which will notify users of closed eyes and other flaws while capturing selfies. In addition, the leak shows a group selfie mode which will allow users to take wide angle selfies. The leak further suggests that the squeeze feature will likely be carried forward from the Pixel XL 2. Finally, the leak shows that by putting the phone’s display face down will allow users to automatically in DND mode and silence notifications.

The new leaks seems authentic, and falls in line earlier leaks about the Pixel 3 range. With just a few days to go ahead of the official launch event on October 9, rumours also has it that Google will announce the Smart TV kit and the Pixelbook alongside the upcoming Pixel 3 range.