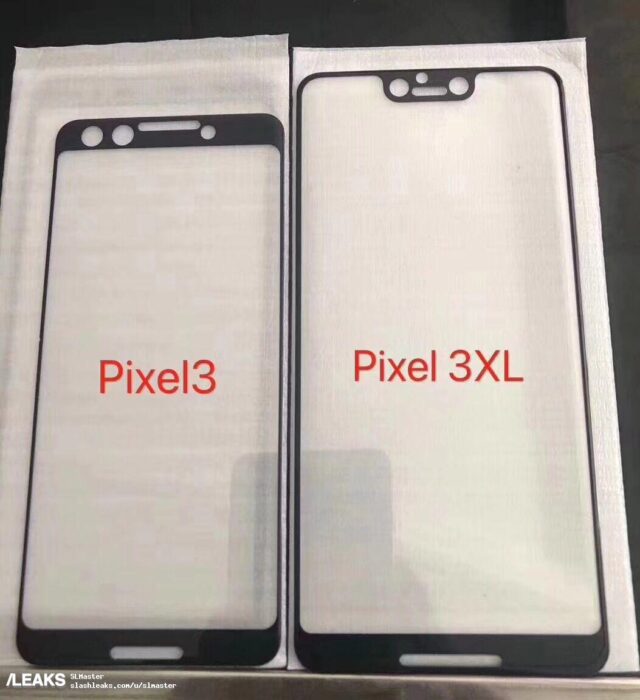 A screen protector purported to be that of the upcoming Pixel 3 and Pixel 3 XL has surfaced online, reigniting debate on whether the new gen Pixel handsets will come with a notch or not.

Going by the leaked images at the moment which again are courtesy of slashleaks, what is evident right away is a mixed approach from Google in that the bigger Pixel 3 XL will have a notched display while the smaller Pixel handset will have a more conventional layout. That refers to a chin at the bottom along with a considerably thick bezel at the top. Also, while the Pixel 3 XL looks radically different from its predecessor thanks to the notch, the smaller Pixel shares a lot of similarity with the present gen Pixel 2 phone.

Worth mentioning here, Google seems to be adopting the notch in a big way given an earlier report of the specific design feature getting hard coded right within Android P. That can also be considered quite controversial given the widespread dissent against the notch. First introduced in a big way with the iPhone X, the notch has since been a topic of debate as to whether it really is desirable; so much that OnePlus decided to play it safe by introducing a setting to make the notch invisible.

Meanwhile, another interesting feature that the screen protectors revealed is the presence of front facing speakers. This do match an earlier speculation wherein the upcoming Pixel handsets are touted to come with front firing front speakers. That is not all as the screen protectors also reveal large cut-outs at the front which points to the presence of dual front facing camera, which would be another first for the Pixel range of phones so far.

The usual timeline for Google to introduce its new range of Pixel handsets is late fall. In fact, Google happens to be among the last among the top tier companies to introduce a flagship phone. That also makes Google’s prospect quite challenging given that almost all Android flagships have the same internal specifications. That makes the Pixel phones to be just another device with more or less the same specifications, which typically includes the latest Snapdragon chip and so on.

However, Google still manages to impress buyers with its commitment to quality and superior user experience. The Pixel range is also known for superb camera capabilities, something that applied to the Pixel 2 range as well. That also makes us believe the Pixel 3 will only improve on.

Coming back to the latest leak involving the screen protectors, those are rumors at best and is hence just cannot be trusted entirely. But then, those might be real as well. Who knows.