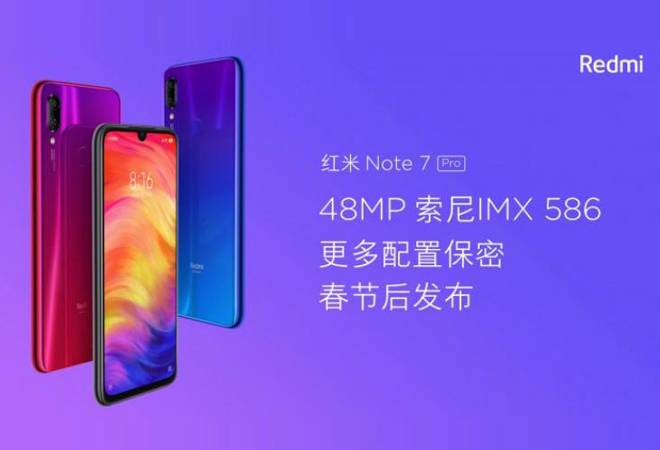 Xiaomi recently unveiled the Redmi Note 7 in China as the first smartphone under its “Redmi by Xiaomi” brand. The new smartphone comes with unbelievable specifications for the price it retails for. During the same event, the company also announced the Redmi Note 7 Pro. While it was marked to launch in Feb, we now know some of the critical highlights of the handset, alongside its pricing information.

The Xiaomi Redmi Note 7 Pro will be a successor to the just launched Redmi Note 6 Pro. As for the design, there won’t be much difference when compared to the Note 7. It’ll bear a similar glass sandwich design with gradient finish on top. This will be further accompanied by dual rear cameras, a dew-drop notch followed by a small bottom chin at the front.

If rumours are to be believed, the device will be powered by Qualcomm Snapdragon 675 processor. Whereas, the Redmi Note 7 gets its power from Snapdragon 660 SoC.

The Snapdragon 675 is relatively a new chipset, introduced back in the 4G/5G summit held in China, last year. During the event, Manu Kumar Jain, Global VP, and MD at Xiaomi India revealed that Xiaomi would soon launch a mid-range smartphone with Snapdragon 675 SoC.

The Snapdragon 675 SoC is an octa-core chipset, manufactured on 11nm LPP process. Furthermore, it comprises an octa-core Kryo 675 CPU and Adreno 612 GPU for graphics. On paper, the new chipset offers 30% faster game launch and 35% faster web browsing over the Snapdragon 670.

Notably, the SD675 also supports Qualcomm Quick Charge 4.0 and can capture Ultra-HD videos (4K at 30fps) with Motion Compensated Temporal Filtering. Note that it recently appeared on Antutu Benchmark with a score of whopping 1,74,402, beating SD 670 as well as SD 710 by 20,000 and 4,402 points, respectively.

Moving on, the Redmi Note 7 Pro will also sport a 48MP camera sensor at the back. As confirmed, it’ll be the Sony IMX 586 with 48MP resolution, unlike the Samsung’s ISOCELL GM1 on the Note 7.

A tipster on Weibo revealed the alleged pricing of the Redmi Note 7 Pro. As per which, the upcoming Redmi handset would retail for a price of CNY 1,499 (roughly Rs. 15,800).

For a starting price of around Rs. 15,000, Redmi Note 7 Pro could take back the crown of the best budget smartphone in the market. Let’s wait for the launch to reveal more about the device. Till then, stay tuned.