From last year, numerous rumors suggested that the “Apple of China”, Xiaomi is planning to bring a MacBook competitor in the market. Yesterday, the company finally launched the much expected Mi Notebook Air in China. The laptops feature MacBook like sleek and premium design and are built with high-quality aluminum.

Xiaomi has released two different Mi laptops. The smaller one comes with a 12.5-inch display and the larger one sports a 13.3-inch screen. The 13.3-inch model comes with more powerful internals than the 12.5-inch one.

Both the notebooks have identical design and built quality. The Mi Notebooks are manufactured by a Tian Mi, a partner company of Xiaomi. As of now, the laptops will only be available for purchase in China. The Mi Laptops come preloaded with Windows 10 Home operating system.

The smaller Mi Notebook sports a 12.5-inch Full HD display with 50 percent NTSC colour gamut. The screen has a brightness of 300 nits and the contrast ratio is 600:1.

The laptop is powered by Intel Core M3-6Y30 processor with an inbuilt 9th generation Intel HD 515 graphics card. The dual core processor features a base clock speed of 1.1 GHz which can rise till 2.2 GHz with the turbo mode. The inbuilt Intel 515 graphics card has a highest clock speed of 850 GHz. There is 4 GB of LPDDR3 RAM running at 1866 MHz. The laptop comes with a 128 GB SSD which has a speed of 500 MB/s. 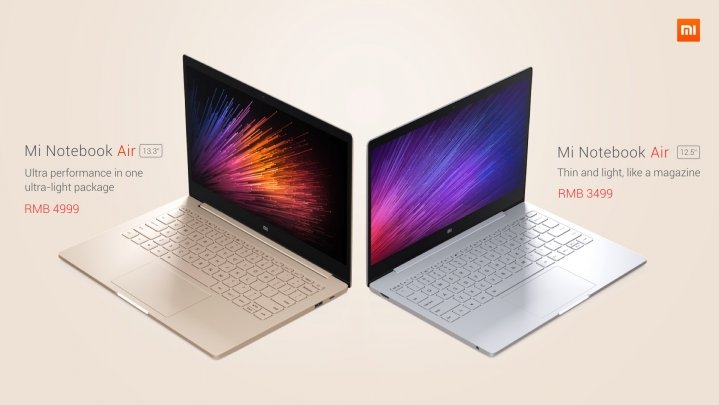 There is one USB 3.1 Type-C port, one USB Type-A port, a 3.5 mm TRRS headphone jack and the usual full size HDMI port. The laptop weighs only 1.07 Kg. It has a 37Wh battery which is claimed to offer up to 11.5 hours of usage time.

The larger and the more powerful Mi Notebook comes with a 13.3-inch Full HD 1080P display. Though the resolution is the same, this screen is considerably better than that of the 1205-inch Mi Notebook. This screen has an increased 72 per cent NTSC colour gamut and improved 800:1 contrast ratio.

This features a much powerful Intel Core i5-6200 dual-core processor. With hyper threading, this can be increased to four cores. Each core has base frequency of 2.3 GHz, which can go up to 2.8 GHz with Intel Turbo.

The Intel HD 520 Gen 9 with up to 1050 MHz clock speed is present as the in-built graphics card. There is also an additional NVIDIA GeForce 940MX graphics card with 1 GB DDR5 dedicated graphics memory. The 13.3-inch Mi Notebook sports an 8 GB DDR4 RAM with a clock speed of 2133MHz. This is a high-performance RAM compared to the low powered RAM of the 12.5-inch Mi Notebook. The larger Mi Notebook comes with a 256 GB NVMe SSD. This is a PCIe 3.0 type Solid State Drive, which is connected through the PCle slot instead of the conventional SATA port. This allows a much higher 1500 MB/s transfer speed.

This laptop has a vacant SATA port to take in an additional HDD or SSD. There is a USB-C port, two USB 3.0 port, a 3.5 mm audio jack and a full-size HDMI port. A 40Wh battery juices up the laptop which promises 9.5 hours of battery life.

The laptops feature a 5GHz 2 X 2 dual band 802.11ac Wi-Fi with Bluetooth. Ethernet or LAN port and Optical drives are absent in both variants. The Mi Notebook comes in gold and silver color options. Till now, Xiaomi hasn’t disclosed anything regarding the global availability of the laptops.