The real images, specifications, and price of the upcoming Mi Notebook have leaked online. The image supposed to be that of Mi Notebook currently used by a person sitting on a chair has been leaked.

The image reveals the right side of Mi Notebook, which is manufactured in full metal unibody with very thin bezels. We are unable to spot the traditional Mi Logo.

After inspecting the image, we can confirm that the Mi Notebook will feature a USB Type-C port for charging. The full-size port on the image should be that of USB 3.0.

The second image displays a zoomed view of the keyboard with up and down arrows clearly visible. We can also see part of the Alt and End keys. However, we can clearly visualize arrow, question, control and home keys.

As per the previous leaks, the Mi Notebook will be available in both standard and Pro variants. The standard version with Intel Core i5 6200U processor, 8GB DDR4 RAM and 256GB of SSD storage will be available for 3999 Yuan ($600).

We also spotted a comparison sheet which compares the specifications and price of Mi Notebook with other premium PCs like the Lenovo Yoga 700, an Asus ROG PC, and the Macbook Pro. 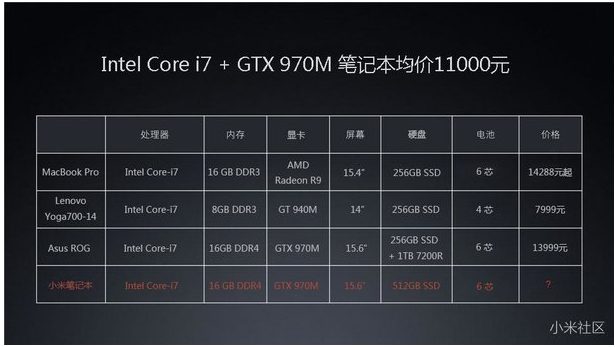 The upcoming Mi Notebook offers enhanced storage than the Lenovo and Macbook Pro. Moreover, the device offers same graphics card as the ASUS ROG. The comparison sheet also states that Mi Notebook has the ability to deliver up to six hours of battery life.

If rumors are to be believed, Xiaomi will ship only 3,00,000 units of the Mi Notebook in 2016. This figure is far lower than the estimated one million units targeted to sell out before the end of 2016. According to reputed supply chain sources, the cut in the projected supply was due to the repeated postponement of the launch of the laptop.

With shipments from both the companies expected to start from July end, the supply will be terminated upon reaching 3,00,000 units due to result time constraint.

In all probability, the Mi Notebook will be unveiled on July 27 with the first batch of flash sale expected to occur before August 15.