Xiaomi has established a private bank in the Sichuan province of China. According to company sources, the Xiaomi Sichuan bank will open doors to the public within the next few months. The move by the China-based smartphone giant is considered as a strategic initiative. The company is expected to leverage the huge fan base to boost the overall growth of the company.

Back in June, Xiaomi’s subsidiary Sichuan Yinmi Technology established a partnership with few other enterprise companies located in Sichuan to float a new bank. Recently, the company got the required approval from the China Banking Regulatory Commission, which is required for the establishment of the new private bank.

In a statement released by Xiaomi’s CEO Lei Jun on his Weibo page, the new Xiaomi private bank will also provide internet banking services. Jun also posted an image possibly that of the logo of the new bank. If this development turns out to be true, then Xiaomi will have an edge over its competitors in the financial segment among smartphone companies based in China. 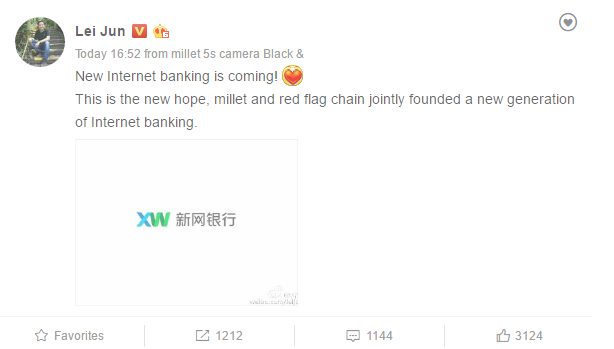 Dubbed to serve individual customers, the Xiaomi Sichuan private bank will also meet the requirements of small and medium sized companies including people engaged in the farm and agricultural sector.

With 30% stake in the new bank, New Hope Group is a major investor and is also the China’s largest animal feed producer. Meanwhile, Xiaomi will manage and control 29.5% stake through its subsidiary.

The business strategy surrounding the establishment of a new Private Bank is solely dependent on New Hope’s widespread agricultural presence. Moreover, Xiaomi has an approximate count of 200 million users. According to industry analysts, the Xiaomi Sichuan private bank will be able to offer enhanced financial services.

Recently, Xiaomi had launched the Wallet service. It is basically an internet-based money market service. Furthermore, the company is also working on to establish Mi Pay, which is an online based payment platform with a wide range of products and services.

According to Xiaomi insiders, the company is gearing up to build an integrated ecosystem to establish connectivity between partners and users to tap the rich potential of internet-based financial services. In the recent past, e-commerce giant Alibaba had launched Alipay followed by TenPay by Tencent.

The emergence of Xiaomi Sichuan Private Bank will mark the beginning of a new phase in the direction of Internet banking. It remains to be seen as to what steps the company takes to establish a similar bank in India. With Prime Minister Narendra Modi making a strong push for digital wallets, the launch of Mi Pay will provide beneficial to tech savvy people in India.