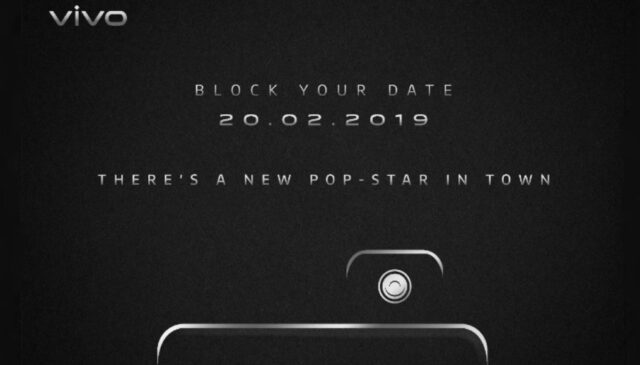 Vivo has now sent ‘Block your Calendar’ press invites for a new launch scheduled for Feb 20 in India. Talking of which, the invite reads ‘There’s a new Pop-Star in town’, hinting at a new smartphone with a pop-up selfie camera. Although the company hasn’t confirmed the name of the handset, it is most likely to be the rumoured Vivo V15 Pro with triple rear cameras.

Being a successor to the last year’s Vivo V11 Pro, the Vivo V15 Pro is expected to be a premium mid-range smartphone. It’ll be the next smartphone by the company to feature a pop-up selfie camera. To recall, the Chinese giant launched the Vivo NEX with flagship grade specifications and a motorised selfie camera, back in July 2018.

That being said, the Vivo V15 Pro is more likely to be priced cheaper than the NEX. Lately, the device appeared online with leaked transparent case images, claimed to belong to the V15 Pro. The photos hint at the presence of triple rear cameras on the Vivo V15 Pro.

If rumours are to be believed, the handset will also feature an In-display fingerprint scanner. While the V11 Pro (Review) was the cheapest smartphone in India to bring an In-display FP scanner for under Rs. 25,000, the V15 Pro could set another benchmark by being the cheapest to offer a pop-up selfie camera, as well as a fingerprint scanner underneath the display for an affordable price.

Other speculations hint at a 32-megapixel selfie shooter alongside the presence of 3.5mm audio jack on the device. We could also witness fast charging given that the V11 Pro already comes with dual-engine fast charging technology.

As for the specs, the V11 Pro sports a 6.4″ Full-HD+ display with a water-drop notch on top. The V15 Pro, on the other hand, is tipped to bear a notchless display at the front.

Moving further, the V11 Pro gets powered by Snapdragon 660, coupled with 6GB RAM and 64GB storage. There’s a 12+5MP dual camera set up at the back, followed by a 25MP AI selfie shooter at the front. Other notable highlights include a 3,400mAh battery, fast charging and 3.5mm audio jack.

That being said, it’s safe to expect bumped up specifications on the upcoming smartphone. In fact, we could also see a newer chipset, maybe the Snapdragon 675 or 710. Let’s wait for the launch to reveal exact information about the device. Stay tuned for more updates.