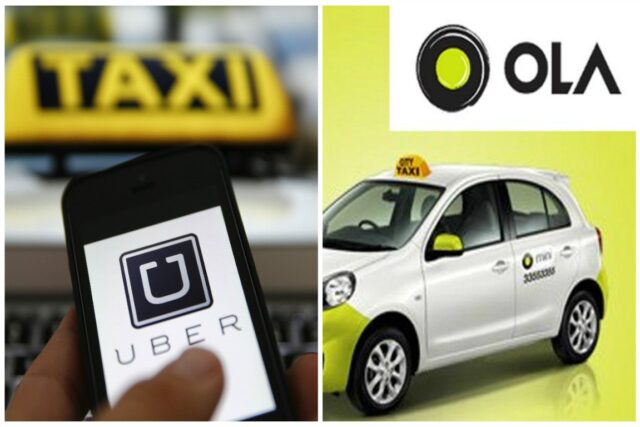 When you talk about futuristic cabs, all one can think about in the country are the top two services that come to you no matter where you are. With a tight network of all major cities and towns in the country, ‘Uber’ and ‘Ola Cabs’ lead as the most preferred service providers. But which one beats the other?

The question depends on what aspect you’re looking at, and it all does boil down to preference and availability at the end of everything. We will compare ‘Uber’ and ‘Ola Cabs’ by their mobile app navigation, ease of booking a cab, prices, and recent controversies.

Ease of the app’s use

Both the apps are quite straightforward to use. With uncomplicated designs, even a new user should be able to find their way around the cab booking app. When opened, both the ‘Uber’ app and the ‘Ola Cabs’ app feature a similar landing page, a map that plots your geographical position as well as that of the cabs nearby to you.

An address bar at the top lets you physically look up either an address or a pin code to set as your pickup location. You can alternately simply move the marker that plots you on the map, to a position where you would like to board a cab.

A pane on the bottom lets you pick from the different types of cabs available, which are ‘Sedan’, ‘Mini’, ‘Prime’ TFS (Taxi for Sure)’ and ‘Auto’ with Ola Cabs and ‘UberGo’, ‘UberX’, ‘UberBLACK’ and ‘UberSUV’ with Uber. One difference between the two is that Uber also offers you to pick from ‘wi-fi’ enabled cabs of the options mentioned above while Ola Cabs lets you schedule a booking for a ride to be completed later too.

A tab on the upper left of the Uber app gives you details on your payments, ride’s history, a help section, free rides (lists your promo code to be shared with new signees, so you earn free rides), promotions, notifications and settings.

Ola Cabs’ app is quite similar to all the information mentioned above under different tabs placed in the same upper left-hand corner of the app. Three new additions appear in the Ola Cabs app in the lower pane, to display options of ‘Micro’, ‘Share’ and ‘KAALI PEELI’ when you activate ‘Group Sharing’ from the options tab at the top.

Both Uber’s and Ola Cabs’ app bring comfort to hailing a cab. Be it a luxurious ride or a simple cab, all you have to do is enter the destination you would like to go to. Once you have selected your destination and the type of cab you would like to ride by, both providers will give you an estimate for the fare you will incur.

As mentioned before, Uber will let you confirm your booking and dispatch a cab for your ride in a real-time fashion, while Ola Cabs also allows you to pre-book and ride later. A handy feature when you have to stick to a tight schedule and don’t want to be waiting for a cab to arrive.

There have been instances reported regarding both providers, where users have had to swap one provider for the other due to a glitch in their systems leading to delays in cab arrivals.

Both providers charge Rs.1/min for the duration of your ride and Uber has a cancellation fee of Rs.15 in Bangalore, Rs.60 in Mumbai and Rs.80 in New Delhi.

Both Ola Cabs and Uber operate as middle-men with a fleet of cars and drivers, where such cabbies usually work as independent contractors. Although both providers have a code of ethics and behavioral guidelines in place for their cabbies, it has been found difficult to avoid the occasional controversy, with cabbies booked and sacked for a misdemeanor.

There were several reports last year regarding women being abused and harassed by cabbies in the regions of Bengaluru and Delhi NCR. While both providers employed disciplinary action and terminated their contracts with the accused, impressions still run wild regarding Uber and Ola Cabs, that differ in different regions.

A recent example of misbehavior is one from the 1st week of February 2016 where a lady was sent an abusive message by an Ola cabby for canceling her booking just a few minutes after confirming it. The driver was terminated in light of Ola’s efforts to maintain high safety for their passengers. A copy of the abusive message has however created a roar on Twitter after the lady posted it publicly.