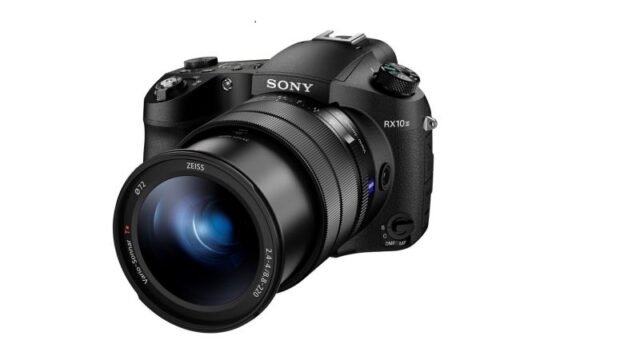 Sony introduced a high-end bridge camera, RX10 III, on April 27, 2016, thus adding up to its long line of DSC series. This compact camera surpasses its kind with a bunch of features never seen before on a bridge. Sony RX10 III will be available for sale in India from April 29, 2016, and is priced at a whopping Rs. 1,14,990. Needless to say, the camera will find its use mostly among photographers who prefer a long range bridge over the fuss of several lenses for interchangeable.

Like most of the bridge cameras, Sony RX10 III also offers a long focal range. The camera comes with a fixed ZEISS Vario-Sonnar T 24-600 mm F 2.4-4 high magnification zoom lens. It is equipped with a 20.1 Megapixels 1.0 type stacked CMOS sensor with DRAM chip and BIONZ X processor, the same sensor and processor combination that has earned laurels for Sony’s mirrorless Alpha series.

Sony RX10 III has a 25x super-telephoto zoom lens offering a focal length of 24-600 mm. The price tagged with the product is not exaggerated, as most of our readers might think. To clear up the confusion, consider this, 70–400 mm F4–5.6 G SSM II A-mount zoom lens alone costs Rs. 1,39,900 in India. Thus, RX10 III is a pretty fair deal since the automated aperture value goes to a minimum of F4 which allows a lot of light to be exposed on the sensor for a well-lit image.

The RX10 III can shoot videos up to a resolution of 4K i.e. a pixel rate of 2160p. It is also capable of capturing videos at 1000fps allowing the camera to record ultra-slow motion videos. It also supports enhanced features such as S-Gamut/S-Log2, gamma display assist, enhanced Zebra function, HDMI output, TC/UB, REC control, dual REC, and marker function. These features give this compact yet powerful camera a stature to find itself in the hands of professional photographers and videographers.

Sony claims that the autofocus on RX10 III is as fast as .09 secs. The intelligent AF has already been employed on the Alpha series and is quite responsive. As a matter of fact, AF response on Sony’s mid-range Alpha SLTs has been a lot better than most of the high-end semi-professional DSLRs from Canon and Nikon.

Sample videos of Sony RX10 III are impressive. Saturation, exposure, and AF find perfect balance while shooting videos. RX10 III is undoubtedly a great camera, but its price will certainly create a rift between its customers. Professionals who want to shoot HD videos on the go will most definitely prefer RX10 III which costs a lot less than mirrorless Alpha 7 series used by professionals.
The fate of this camera is quite obvious. I have seen a lot of professionals use Sony Alpha R-II for mostly recording videos whereas they still rely on their old faithful DSLRs when it comes to still photography. Sony is well acquainted with the fact which explains why the camera manufacturer has bundled this camera with advanced video capturing features.

Sony RX10 III also gives an insight of what the future mirrorless flagship might look like. We hope to see a compact yet rigid and more reliable mirrorless body sometime soon.