Samsung finally rolls out the Secure Folder app for its Galaxy S7 and Galaxy S7 Edge smartphones. The app essentially adds an extra layer of security to a user’s personal data such as photos and documents. The company claims the app is built on the Knox Security platform and comes with encryption capabilities to safeguard sensitive user information. With Secure Folder, users can transfer all their personal data in one place including images, videos, PDFs, documents as well as other files.

How to use Secure Folder

Users just have to pick and move any file such as photos, videos, apps, or documents in the folder to get that extra layer of security on their Galaxy S7 or S7 Edge handsets. Besides, users get several authentication options to lock the folder including PIN, Password, Pattern, Passcode, and even biometrics such as a fingerprint or an Iris scanner. 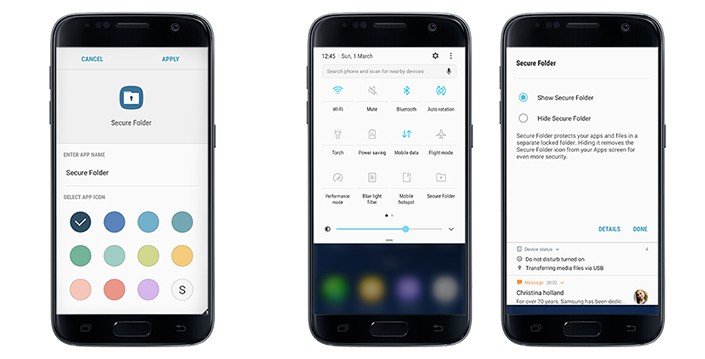 Samsung says the app helps users’ protect their personal data like apps, photos, videos, or documents from hackers and prying eyes. In order to get access to files, one would need to authenticate via the chosen Pin, Pattern, Passcode or a fingerprint.

“With a simple design along with easy setup using a Samsung Account, Secure Folder is as convenient as it is secure. Sensitive data can easily be moved to Secure Folder by selecting Move to Secure Folder from native apps such as Gallery, My files, or Contacts, or by tapping Add files inside Secure Folder”, explains Samsung in the announcement post.

Samsung also notes that the feature offers backup and restore facilities based on the cloud. However, it only works with devices linked with a Samsung account. Users can now download Secure Folder via the Galaxy Apps store on their Galaxy S7 and S7 Edge smartphones, running Android 7.0 and above. The company has also promised to bring the feature to more devices but did not reveal an exact timeline.

To recall, the feature was initially introduced with the Galaxy Note 7, which users could authenticate via the phone’s Iris scanner. However, the Galaxy S7/S7 Edge don’t come with an Iris scanner. They can only authenticate via the chosen PIN, Password, Pattern, or a fingerprint. That said, we’re likely to see an Iris recognition sensor on the upcoming Galaxy S8 and Galaxy S8+ smartphones along with the Secure Folder app.