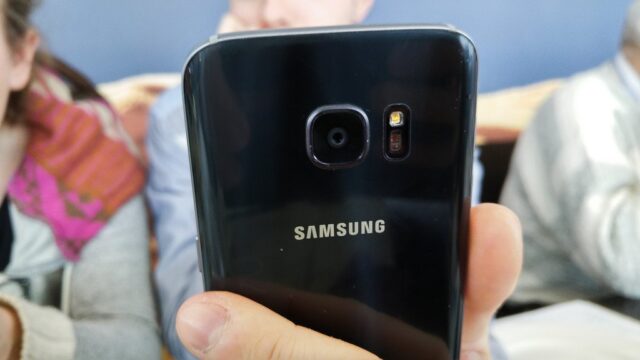 Samsung has already confirmed for a fact that the much anticipated Galaxy S8 will not be announced next month at MWC 2017. Also, credible phone tipster Evan Blass has revealed more or less everything about the forthcoming flagship along with an image of the phone. In this article, we’ve gathered all the rumors, news, and leaks about the next big thing from Samsung to give you an idea as to what we can expect from the smartphone. Is it going to be worth waiting? Well, the rumor mill thinks so! Lets see how?

Evan Blass, who has rather credible record with his leaks in the past, suggests Samsung’s next flagship smartphone will feature some significant design changes. He further adds that it’ll be very different from whatever we’ve seen in previous Galaxy flagships. According to reports, the Galaxy S8 will get an almost bezel-free screen, giving it a display said to be larger than Galaxy Note phablets. That said, the S8’s overall dimensions will still be almost the same as the current Galaxy S7.

As far as specs are concerned, the standard model will feature a 5.8-inch QHD Super AMOLED display, whereas its plus-sized variant is said to pack a massive 6.2-inch QHD AMOLED display.

Besides, both variants are said to feature around 83 percent screen-to-body along with an aspect ratio of 18:5:9. While The Guardian also reports that both S8 models will boast dual-edge curved displays.

Just like in the past, Samsung is expected to announce different variants of its next Galaxy flagship with both Snapdragon 835 and Exynos processors, based on the latest 10nm FeT manufacturing process. Using this technology allows chipset manufacturers to improve performance and reduce battery drain.

Speaking of the battery, the 5.8-inch variant is said to pack a 3000mAh battery, while its larger sibling is expected to boast a 3500mAh battery.

Besides, both models are said to feature 4GB of RAM along with 64GB of built-in storage, further expandable to up to 256GB via microSD slot. Other notable mentions include USB Type-C connectivity, along with the classic 3.5mm jack.

Not many changes are expected in the photography department. As the Galaxy S8 will pack the same 12MP duo-pixel primary camera on the back. However, the front facing shooter is said to get bumped to 8MP from last year’s 5MP front-camera.

Reports also suggest that Samsung has an added an Iris scanner, apparently the same found on the ill-fated Galaxy Note 7. The Galaxy S8 won’t have any physical buttons on the front, hence the fingerprint scanner has reportedly been moved on to the phone’s back.

Also, the Galaxy S8 is said to feature Force Touch technology, the same technology introduced with the iPhone 6S.

Samsung has already confirmed the upcoming Galaxy S8 will not be unveiled next month at MWC 2017. Instead, multiple reports now claim that the smartphone goes official on March 29, while it goes on sale starting April 21. As far as pricing goes, the rumor mill suggests the 5.8-inch Galaxy S8 will be priced around $855, while the larger 6.2 model will command a ridiculous price tag of no less than $962.