A Micro-photosynthetic cell technology has been invented recently by the team of researchers at Concordia University in Montreal, Canada. The main concept lies is trapping the electrons released by blue-green algae and photosynthesis.

This fresh invention no doubt will enable inexpensive ways of producing energy that is utmost clean along with free from carbon particles. The credit goes to the team of Dr. Muthukumaran Packirisamy, who is the research chair of the laboratory at Concordia named as Optical Bio Microsystem, who has worked day and night for such outcome.

The featured report can be viewed in detail in the journal TECHNOLOGY of September 2015 month. Everybody is just crazy for green and clean energy; also the hazardous issue of global warming will also be sorted out with this.

We all are very much aware that the major source of every is the sun, which has the power to produce the enormous energy that humanity even if continuously consume, will not able to finish even.

In plant cells, the phenomenon of photosynthesis and respiration is ongoing which involves chains of electron transfer. The main concept of this invention is the trapping of those electrons that are released in this process by blue-green algae.

This photosynthetic power cell has an anode, a cathode and a proton swap membrane. The anode compartment consists of cyanobacteria and it liberates electrons to the surface of the electrode from a redox manager that is available at the cathode. 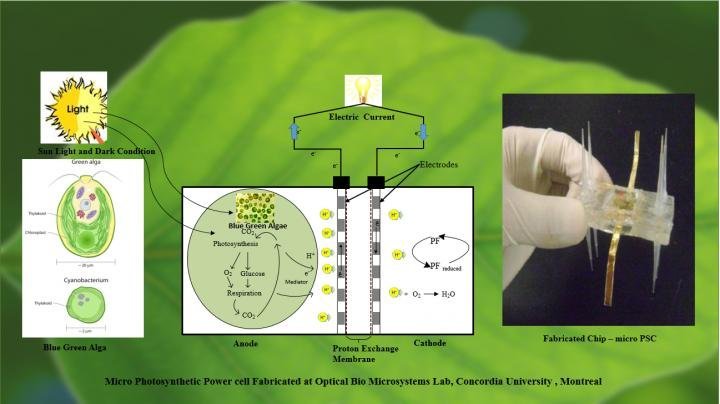 An outer load is linked to extracting the electrons. One can have a look on to the detailed report in the journal TECHNOLOGY.

These micro-photosynthetic power cells might involve considerable military and wireless devices. They can also be excellent power sources for Bio-MEMS appliances. However, few challenges still subsist for the researchers of MEMS produce the small scale anode-cathode compartments that are appropriate for creating the high power density and high current density from the cell.

No doubt still much work is needed to be done to make this marketable.