Korean technology giant Samsung’s flagship Smartphone Galaxy S6 and the Taiwanese phone manufacturer HTC’s flagship Smartphone One M9 are pitted against each other. Both the phones are packed with top notch components and run on Android 5.0 Lollipop. We have compared the most promising features of S6 vs M9 and present to you winner among the two: 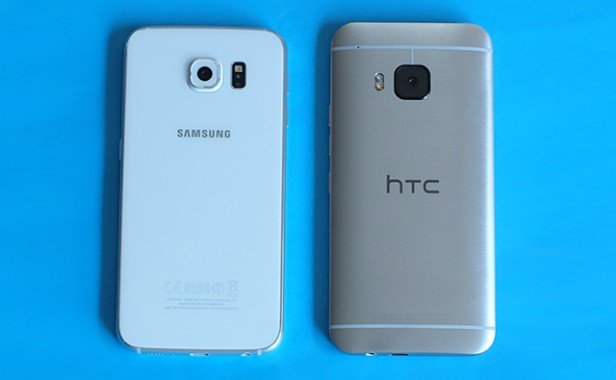 Samsung has done away with Snapdragon chip in this version of Galaxy S series though the previous three S series phones were powered by Snapdragon processors. The home designed Exynos chip has better performance and has outgunned Snapdragon in all performance benchmark tests.

For an ordinary user the difference in the chipsets would not result in huge performance challenges. Both the Smartphone run the Android 5.0 perfectly. If we have to score one Phone on another we will score Samsung Galaxy S6 for coming out with better designed chip.

With the premium Aluminum case and Corning Gorilla glass, Samsung S Series phones no longer appear cheap but fight with premium designs iPhones and HTC’s of the world. The plastic feel of the Samsung phone is long gone with top quality material and finish.

Also, if you go for the Galaxy S6 Edge, you will get a visual feast of the year with the display on Edge of the phone. Samsung Galaxy S6 also feels great in hand due to its slightly rounded edges and thinner size.

HTC always scored big in the design department with M9 taking the same road with excellent design and finish. But the HTC One M9 design is same as HTC M8 design with a minimum change. It features an almost all-aluminum uni-body construction but now in a dual tone finish. The phone is ergonomically designed to be used from single hand but it doesn’t hit the mark in design department.

Both the Phone has great display. S6 has a QHD screen, the M9 a lower-end Full HD one. With naked eyes the display of both the phones will not appear too much different.  What really sets Samsung S6 apart is its use of Super AMOLED screen. The Contrast level and the color scheme are much more enhanced in S6 as compared to HTC One M9.

Samsung and HTC have updated the cameras on their latest flagship smartphones. The wide aperture ratio of the Samsung Galaxy S6 means that lens would bring in more light which would provide better image quality for the low light photos.

Galaxy S6 also has optical image stabilization which is surprisingly missing in HTC. HTC One M9 has advantage of better Megapixel it is due to its sharper images and OIS Samsung S6 emerges as a winner in this department too.

The Point where HTC One M9 scores a big over Samsung is microSD card slot. Samsung has always provided expandable memory but they have passed on this feature in latest release. Samsung has integrated Samsung Pay which is better than Apple Pay in terms of support for NFC payment as well as payment for terminals which do not support NFC. Samsung also support wireless charging and fast charging which can provide a decent boost in 10 mins of charging.

Samsung Galaxy S6 scores big over HTC One M9 in all departments and will help Samsung hit New Year in style. They have suffered in huge losses last year with mediocrely designed S5. They have learned their lesson and a Good one. Samsung Galaxy S6 has all the features packed in to make a great phone.