Samsung Galaxy Note 7 will be launched in India on August 11. The official Samsung India launch invite was revealed by the founder of Phone Radar via his Twitter handle.

The invite states “Samsung India Electronics cordially invites you for the unveiling of Samsung’s next flagship on 11th August 2016”. However, the timing has been removed with place given as New Delhi.

Just when Samsung is gearing up to launch the new device in New York, the actual renders of the Galaxy Note 7 was leaked via GSMArena. The render showcases three images with 12.45 alongside the date of August 2. We can see pencil type renders with blue, orange and white colors respectively, which should be the likely colors of the smartphone.

Meanwhile, a close-up view of the phablet’s retail box has also been leaked.

The image of the rear side of the package has also been leaked on a popular tech portal. It reveals the specifications like 4GB RAM, dual pixel camera including water/dust resistant capabilities. 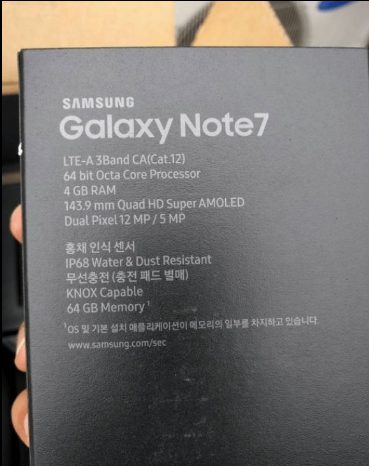 Talking about the launch event in the US, there are reports that Samsung will also launch the Gear VR headset and the Gear S3 smartwatch.

Samsung has revealed on its official blog that the new Galaxy Note 7 will enable people to do more at work, home and everywhere at any time. The company also hinted at the release of the new stylus S Pen.

Commenting on the launch, an official spokesperson disclosed that with large display coupled with the new S Pen, the Galaxy Note 7 will set new benchmarks in the smartphone world.

The device will be useful for both professionals and gamers, who would like to play all the games available on the earth. Moreover, the features integrated with the new device will improve the lives of people to a large extent.

On the specifications front, the Samsung Galaxy Note 7 features a 5.7-inch QHD (1440×2560) display, Snapdragon 821 processor, 32GB expandable internal storage, 12MP rear camera with dual-pixel technology. Furthermore, the new device will be loaded with Android 7.0 Nougat, which is expected to be released on August 5.

The main attraction of Samsung Galaxy Note 7 is the integration of Iris scanner, which provides an ability to make use of your eyes to unlock the device. Recently, a disclaimer statement reportedly that of the new Iris scanner was leaked on the media. It provides a series of situations where you should not use the scanner.

According to reports, the devices shipped to Asian countries like India will have an Exynos 8893 processor. Moreover, the device will have a dual-camera setup with 5MP snappers on the rear and the front in addition to the default 12MP rear sensor.

Regarding RAM, there are conflicting reports. The initial reports state that the device will have 4GB RAM with 64GB storage. However, few sources added that Samsung will release two variants with both 4GB and 6GB RAM with 128GB storage space. The Samsung Galaxy Note 7 is expected to be released at EUR 849 (Rs. 63,000).