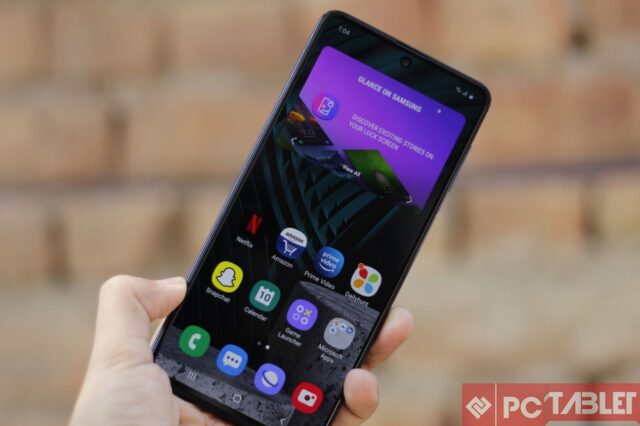 Right when we were thinking the Galaxy M series would be competing with the likes of Realme and Poco, Samsung pulled out the M51. It’s a weird phone especially coming from Samsung but in a good way. The M51 packs in a monstrous 7,000mAh, yeah you read it right, along with a Full HD+ AMOLED display and a Quad Rear Camera module.

With this new phone, the M series has moved on to the mid-range tier which has been dominated by the Chinese player. For the INR 24,999 starting price, the Galaxy M51 would go head with the OnePlus Nord that launched a few months back.

Is the new Samsung Galaxy M51 any good? Let’s find out in our full review.

Before starting with the Samsung Galaxy M51 review, let’s have a glance at the phone’s specifications, pricing, and things we get with the device.

Since last Galaxy generation smartphones, we are seeing Samsung putting out a reference design, that the entire Galaxy smartphone line-up adapts no matter what the price is. The Galaxy M51 is a bulky phone with that 7,000mAh and it takes time getting used to. The phone is being offered in two colours and the dark variant picks up a crazy amount of fingerprints. 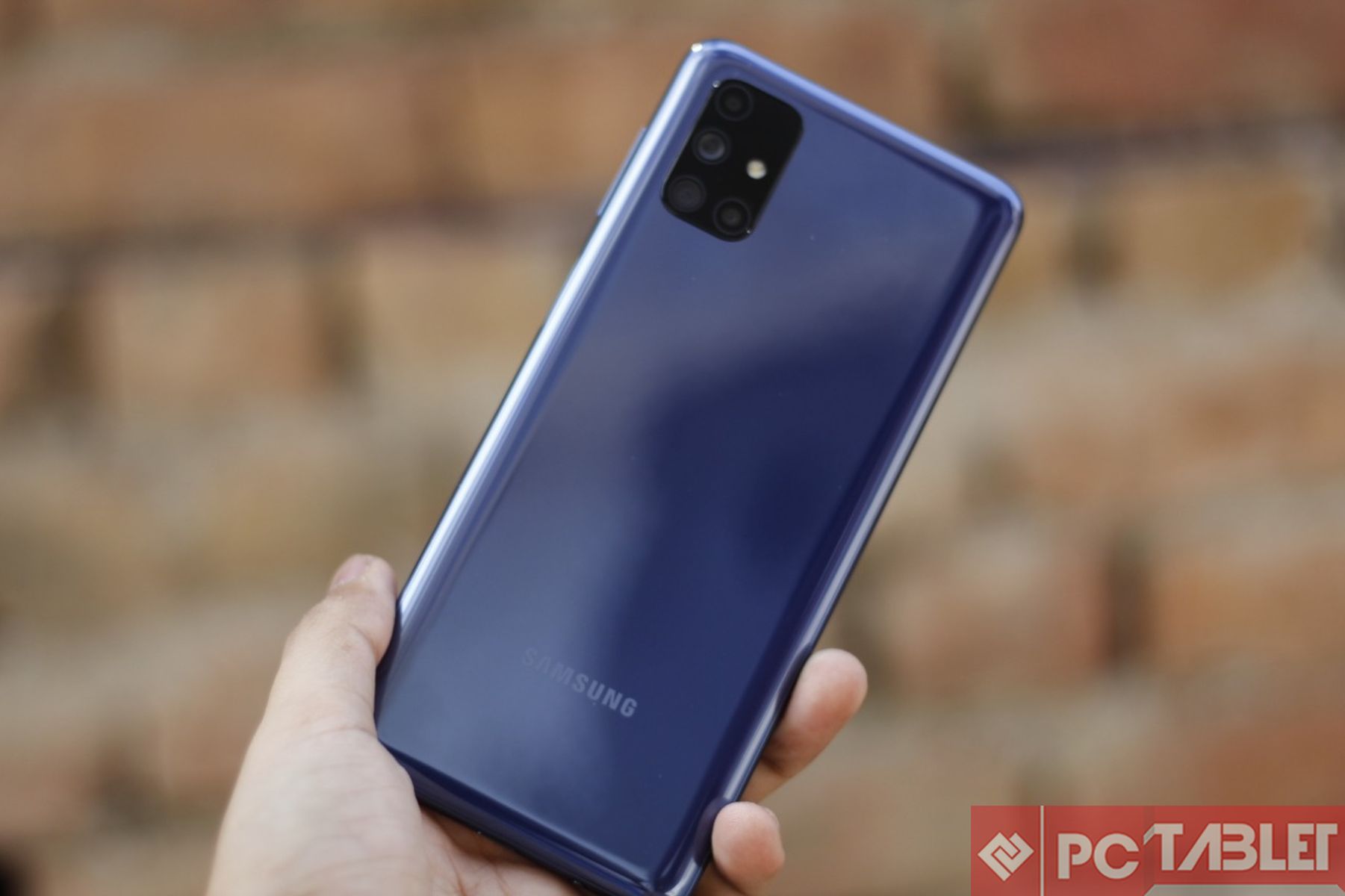 The entire phone is carved out of high-quality polycarbonate. We get Gorilla Glass 3 on the front and a ‘Glastic’ back. Glastic is a term coined by Samsung for their Glass+Polycarbonate mixed back cover. It sure looks and feels like glass but it ain’t one. Moving to the cameras, you get a rectangular module on one corner, packing the quad sensors in ‘L’ shape, something we have seen on the flagship S20 series.

In order to save some bucks, Samsung opted for a capacitive side-mounted fingerprint sensor instead of an in-display one. The fingerprint sensor also doubles as the power button. Talking about the button placement, the volume button is on the right, USB-Type-C charging port, primary microphone, speaker and the 3.5mm audio jack are situated at the bottom. You will find the triple slot tray placed on the left side of the phone.

Flipping the phone reveals the massive 6.7-inch 20:9 aspect ratio Full HD+ AMOLED. Samsung has trimmed the bezels quite a bit which further helps the phone stand out. The selfie camera is tucked away in a punch-hole further giving the phone a modern look.

As mentioned above, Samsung has gone with an Infinity-O display, which means there’s a hole at the centre of the top of the screen for the front camera. The display measures 6.7-inch end to end with minimal bezels all-around. It’s a trademark sAMOLED meaning you get the punchy colours that these Samsung displays are known for. 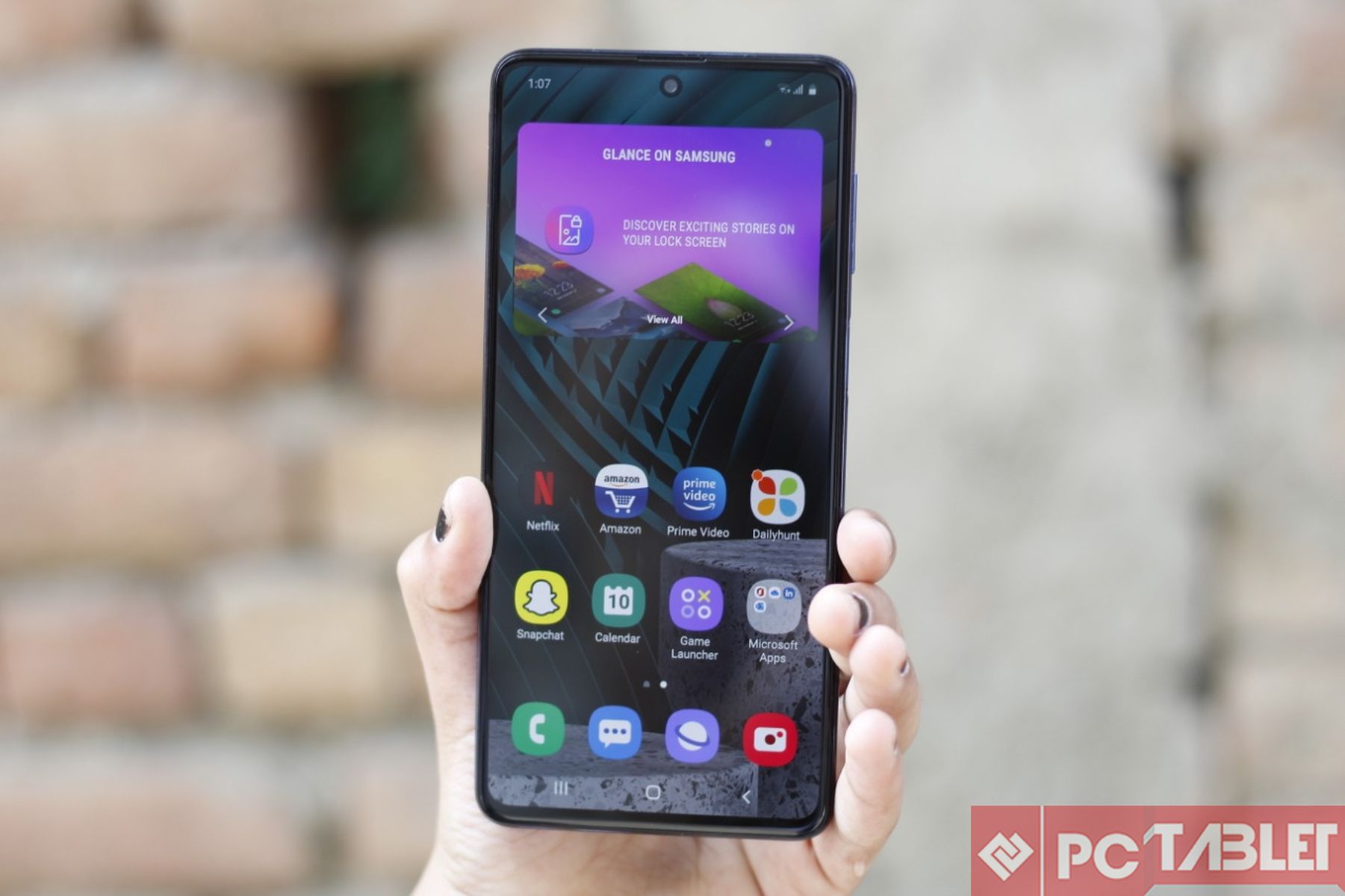 In terms of protection, the screen is covered by Gorilla Glass 3 which seems dated considering the fact that even sub INR 15k are coming with Gorilla Glass 5. Right out of the box the display is a bit on the cooler side, which can be tweaked from the settings app. The display gets fairly bright so outdoor visibility won’t be an issue. You get deep blacks and vibrant colours overall, making this display ideal for content consumption.

Speaking of content consumption, you get Widewine L1 support, so you can enjoy HD content from your favourite streaming apps. The display does support HDR but it only kicks in the YouTube app. The only area where the M51 seems to be lacking in a higher refresh display, something you see on its closest competitor OnePlus Nord.

The Galaxy M51 runs Android 10 with OneUI Core 2.1 on top. Our unit came with the latest August security patch and Samsung has been readily pushing out updates lately. If you are someone who has used OneUI in the past, you will at home. The UI is easy to navigate with big icons. Like with previous OneUI iterations you get loads of customization options here as well.

That being said, this build also comes with a load of bloatware. Barring the Google apps and Samsung apps, you also see apps like Amazon, Dailyhunt, Candy Crush, Moj etc preinstalled. Some of these apps will annoy the hell out of you with push notifications, but thankfully they can be uninstalled.

Other than this, the UI is a breeze and comes loaded with features like Game launcher, navigation gestures, dark mode and even fingerprint gestures. The new and upcoming OneUI 2.5 brings a little more refinement and changes and it should be released for the M51 in the next few weeks.

The Galaxy M51 is powered by the Snapdragon 730G processor which is a highly popular mid-range chip from Qualcomm. The chip has a proven track record and flies the phone smoothly. We are not much of benchmark freaks but the phone scored 264k+ on Antutu. The M51 comes in two memory configurations both 6GB or 8GB while the internal storage remains the same 128GB. 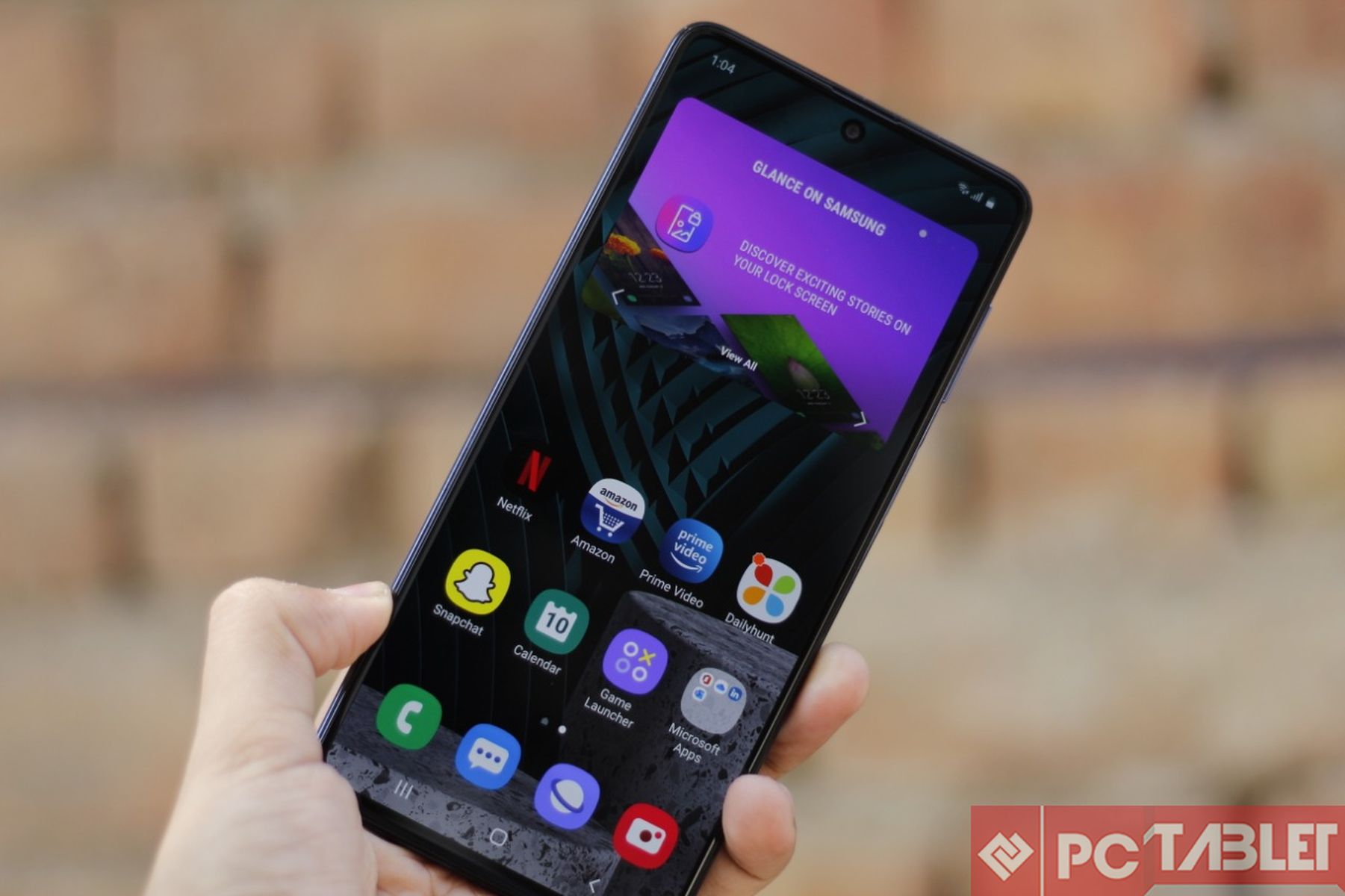 When looking at the price range and competition the nearest competitor is the OnePlus Nord that is powered by the Snapdragon 765G which is essentially an overclocked 730G with 5G support. Samsung’s decision to not adding this particular chipset and driving up the cost because of 5G is understandable.

During our testing period, we did not notice any lag or stutter whatsoever. The phone has decent memory management and can easily day-to-day tasks quite well. We did try doing some gaming, and games like Call of Duty and Asphalt 9 worked well with medium to high graphics. Titles like subway surfer, candy crush that is less graphic demanding were even better.

The call quality and speaker output are on par with the competition. The output via the 3.5mm audio jack is decent at best. While the phone packs an AMOLED panel, Samsung didn’t go with an in-display fingerprint sensor. The side-mounted capacitive fingerprint is fast and comes with gesture support which we feel is a nifty addition.

Samsung has gone with a quad-camera setup on the Galaxy M51 with the primary lens being an f/1.8 64-megapixel Sony sensor. It is aided by a 12-megapixel ultra-wide-angle lens with a 123-degree field of view, a 5-megapixel macro lens and lastly a 5-megapixel depth sensor.

The camera is the same we see on other Galaxy phones with nothing extra added here. You get the basic modes and an extra 64MP for making the better use of that sensor.

Like with other OEMs these days, Samsung too has implemented AI into the camera app, and they call it ‘Scene Optimiser’. This helps in picking the correct settings depending on the type of shot you are taking. The phone was quick to focus, and images looked sharp on the infinity-O-display. 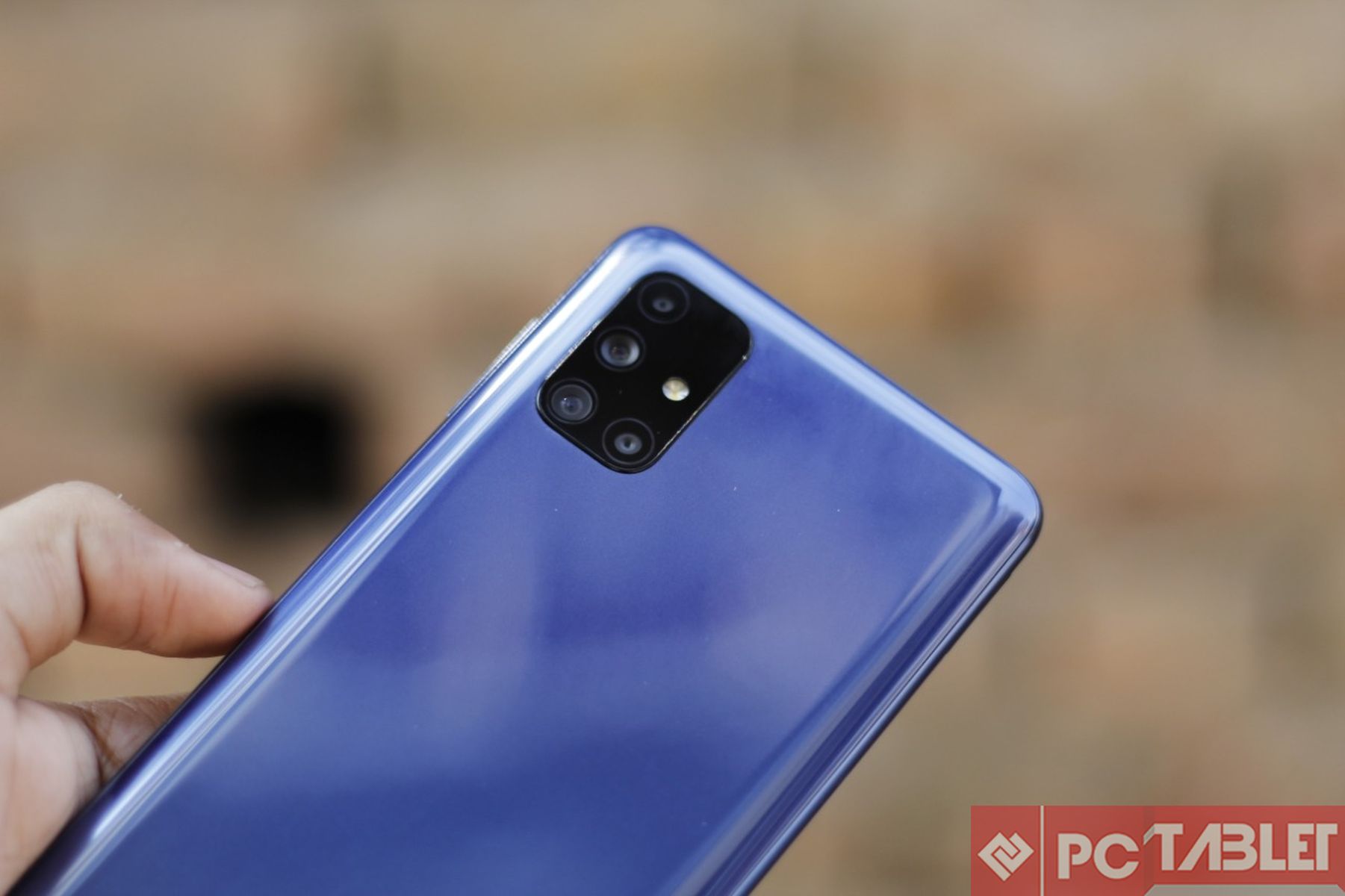 The images taken from the main sensor in broad daylight came out well with plenty of detail, sharpness and a balanced dynamic range. We found the HDR on point, something that Galaxy phones do quite well. Since it’s a pixel binned sensor, by default you get 16-megapixel shots out of the camera but there is a dedicated 64MP mode to get the full resolution.

Shots taken by the wide-angle lens were decent at best, not up to the main sensor levels but the colours were quite comparable between the two. One of the nifty features with the app is the ‘Live Focus’ mode, that lets you shoot portraits and set the level of blur even before the shot has been taken. The other two macro and depth sensors worked as expected with above-average edge detection and focus levels.

Moving to the selfies, the M51 comes with a 32-megapixel Sony 616 sensor. There is a wider view lens here and the shots taken by default are 8-megapixel but you could bump it up to 12-megapixel and 32-megapixel. Daylight performance was excellent with most of the features you find for the rear cameras, like the Live Focus mode working well here. We found the lowlight performance average at best and Samsung could definitely work in this area.

As mentioned in the specs section, the phone features a monstrous 7,000mAh battery something we haven’t seen in the fast coming from a Tier 1 OEM. Paired by a Qualcomm chip, this phone is literally a power bank in itself. During our testing, we managed to get two full days’ worth of battery backup with medium to heavy usage. Using the supplied 25W charger, the phone took close to two hours for a full top-up. 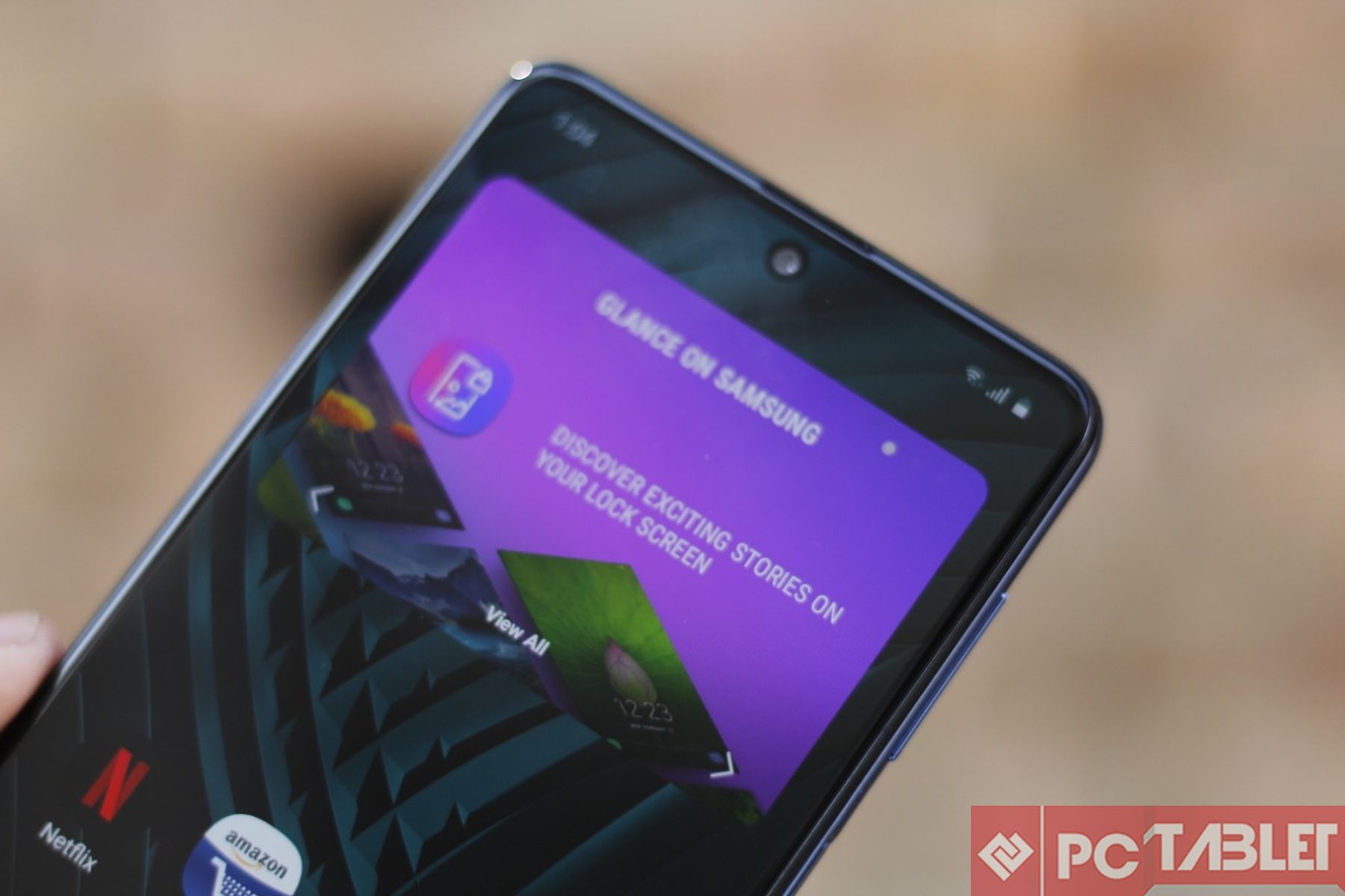 With the Galaxy M51, Samsung has opened by the M series to a slightly larger audience base. Factoring in the crisp sAMOLED display, 7,000mAh battery and Samsung’s trust makes it one of the exciting products of the latter half of this year.

Compared to the OnePlus Nord, the only downside we can see is the higher refresh display and guaranteed software update support for 3 years. That being said, the M51 takes a lead in other areas. For us, M51 takes the cake if battery life is one of the deciding factors for you.