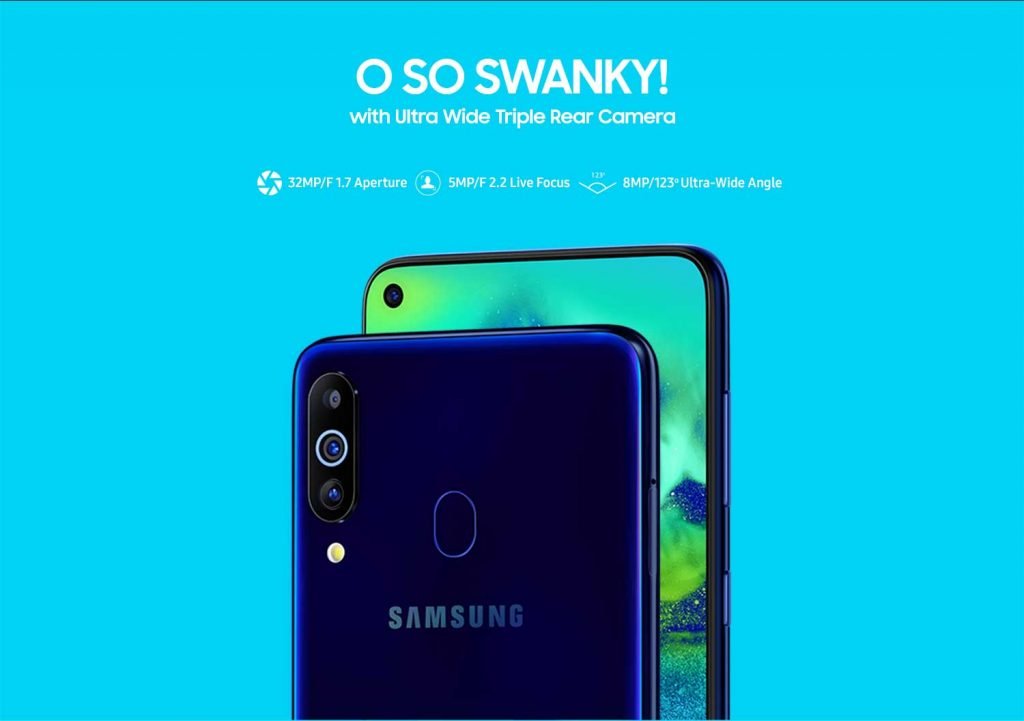 Samsung has now finally launched the very new Samsung Galaxy M40 smartphone in India, as scheduled at 6 PM today. The main highlights of the phone include an Infinity-O display, triple rear cameras, and Snapdragon 675 SoC.

In addition to being the cheapest smartphone to offer punch-hole display, the Samsung Galaxy M40 is also the first in its segment to bring screen sound technology. As seen on Huawei P30 Pro and LG G8, the technology allows the display panel to produce audio through vibrations, eliminating the need for an earpiece.

As tipped yesterday, the Samsung Galaxy M40 comes with a 6.3-inch Infinity-O Display with a full-HD+ resolution and Corning Gorilla Glass 3 protection. The panel further boasts a contrast ratio of 1200:1, accompanied by a maximum brightness of 480 nits. As mentioned, the device makes use of screen sound technology instead of the earpiece to rectify bezels.

Under the hood, the device gets powered by the same Snapdragon 675 that we saw in the Xiaomi Redmi Note 7 Pro and Vivo V15 Pro. Prominently, Snapdragon 675 is a powerful mid-range chipset based on the 11nm process that comes bundled with Adreno 612 GPU. Furthermore, the phone bears 6GB of RAM and 128GB of internal storage that is expandable up to 512GB.

For photography, it sports a triple rear camera set up with a 32MP primary camera with f/1.7 aperture, a 5MP depth sensor with f/2.2 aperture for portrait shots, and an 8MP 123-degree ultra-wide angle camera with an f/2.2 lens. For selfies, there’s a 16MP shooter with f/2.0 aperture housed in the punch-hole.

As you’d expect, the smartphone runs on Android 9 Pie with Samsung One UI on top. All of this gets backed by a 3,500mAh battery with Adaptive fast charging. Connectivity features comprise of a hybrid card slot, dual 4G VoLTE, Wi-Fi 802.11 ac (2.4GHz + 5GHz), Bluetooth 5, GPS + GLONASS, USB Type-C.

Note that the phone lacks a 3.5mm audio jack and relies on USB Type-C audio instead. Unlike the Samsung Galaxy A50, the Galaxy M40 gets a capacitive fingerprint scanner at the back. Besides, the phone measures 155.2 x 73.9 x 7.9mm and weighs 169g.

The Samsung Galaxy M40 price in India has been set at Rs. 19,990 for the sole model with 6GB RAM and 128GB storage. It will be available in Midnight Blue and Seawater Blue colour options via Amazon and Samsung online shop starting June 18.

Launch offers include 100% extra on recharge for ten months for Airtel users. Whereas, Vodafone & Idea users are entitled to receive Rs. 3750 worth cashback in the form of 50 vouchers and additional 250GB data. Jio users, on the other hand, can avail double data benefits on Rs. 198 and Rs. 299 prepaid plans.