Samsung may probably launch the Galaxy A7 handset in 2018. The device was recently spotted on a GFX benchmarking website with a model no. SM-A720x. The listing revealed some of the specifications of the device under 3D Graphics Performance section. Based on the model number it has been speculated that the device would be the next Galaxy A7 variant.

According to the GFX listing, the Samsung Galaxy A7 (2018) packs a 1080p display, but there is no mention of the display size. Powered by a 2.21 GHz octa-core processor with Mali-G71 GPU, 4GB RAM, 32GB of internal storage, and Fingerprint Sensor. The handset runs on Android 7.1.1 Nougat operating system with TouchWiz U.I on top. Talking about the camera, there is a 16MP front camera can record Quad HD videos and a 16-megapixel rear camera with just 1080p video recording. 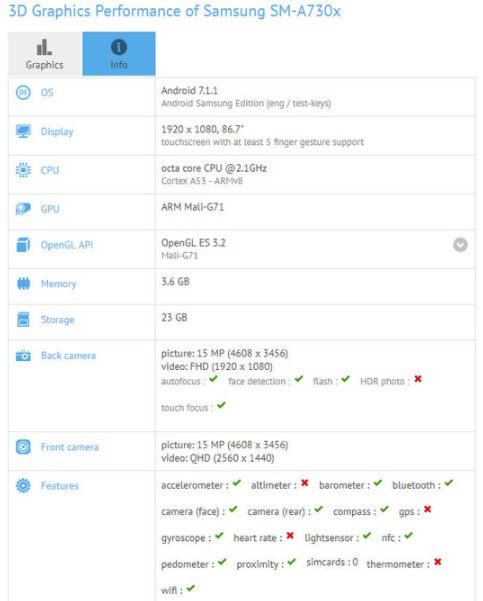 Furthermore, the handset gets fuelled by 3600mAh battery with Fast Charging support, and the connectivity options include Wi-Fi 802.11 a/b/g/n/ac, Bluetooth v4.2, GPS, NFC and USB Type-C. The previous generation Galaxy A7 (2017) was launched in India back in March at a price tag of Rs. 33,490, so it is quite natural to expect the successor to the device to be priced in the similar range.