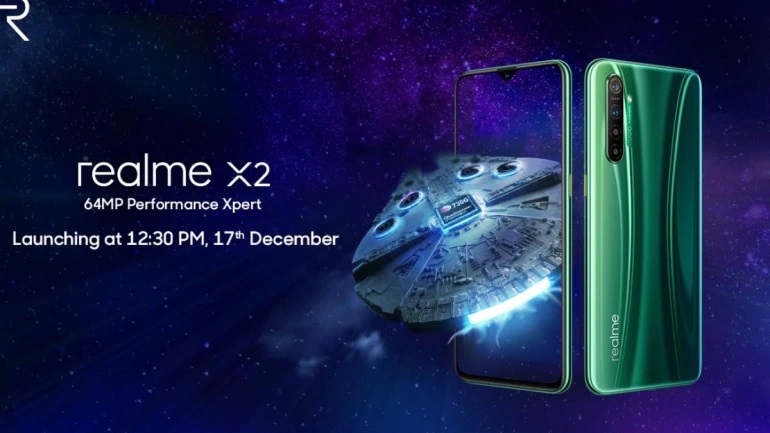 Realme is all set to launch the new Realme X2 and Realme Buds Air, tomorrow at New Delhi in India. However, the prices and storage variants have already been leaked for the device, with the figures suggesting that it’ll be a direct competitor to the Xiaomi’s Redmi K20 and Redmi K30.

The popular tipster Ishan Agarwal has shared an image on Twitter, showcasing the event rehearsal slide that discloses the prices and variants of the Realme X2. According to which, the device will be offered in two different RAM versions while the storage would be the same at 128GB.

The leaked image further reveals that Realme X2 will be available in Pearl Green, Pearl Blue, and Pearl White colour options. And will go on sale starting December 20. In addition, the company will bundle extras with the device including some offers from Reliance Jio and Mobikwik. Unfortunately, there’s no tip on the pricing of Buds Air as of now.

Earlier tipped to be titled as Realme XT 730G for India, the Realme X2 is likely to be the same as the China-spec model. Talking of specifications, the phone will bear with 6.4-inch full-HD+ (1080×2340 pixels) Super AMOLED display with 19:5:9 aspect ratio and a water-drop notch on top.

Instead of Snapdragon 712 on the Realme XT, this one will be powered by much powerful Qualcomm Snapdragon 730G SoC which is a gaming-centric chip built on 8nm process. It’ll further be coupled with 6GB and 8GB LPDDR4X RAM options.

The device will also feature a quad-camera setup at the rear, comprising of a 64-megapixel primary Samsung GW1 sensor and an 8-megapixel secondary sensor. Also, there’ll be a 32MP selfie camera, compared to the 16MP unit found on the XT.

Other specs will include 64 and 128GB storage options, and a 4,000mAh battery with support for 30W VOOC 4.0 Flash Charge technology.

How to Recover Deleted Files from a Memory Card Easily?