Exactly two months after the China launch, Realme has now finally unveiled the Realme X in India. Besides, the company has also introduced a new-midrange smartphone dubbed as Realme 3i.

Realme X is an upper mid-range smartphone that features a notchless AMOLED display, a pop-up front camera and a 48MP rear shooter as its main highlights. The Realme 3i, on the other hand, touts a dew-drop notch, MediaTek Helio P60 chipset and a large 4,230mAh battery.

As for the specs, the Realme X gets a notchless 6.53-inch FHD+ (2340×1080) Super AMOLED display with a 19.5:9 aspect ratio, over 91 per cent screen-to-body ratio and Corning Gorilla Glass 5 protection. The all-screen screen has a 6th generation optical in-display fingerprint sensor, claimed to be 65 per cent faster than the previous generation.

Under the hood, it gets powered by octa-core Qualcomm Snapdragon 710 SoC, same as the Realme 3 Pro. It comes with up to 6GB RAM and 128GB UFS 2.1 storage. The company is also touting the presence of a copper pipe cooling for reducing the temperature by up to 15.2 per cent while gaming.

In the camera department, the Realme X features a 48MP Sony IMX 586 sensor with a 6P lens having an aperture of f/1.7. There’s a 5MP secondary sensor supplemented by an LED flash.

The camera app incorporates a Super Resolution Mode which intelligently merges eight shots into one for high definition photos. Furthermore, there’s a Super Night Scene mode to take well-lit images in low-light conditions. And lastly, there’s a feature dubbed as Chroma Boost, claimed to improve the dynamic range in a photo. Interestingly, the phone can also shoot 960fps slo-mo videos.

For selfies, there’s a Pop-up camera with 16MP Sony IMX471 sensor and f/2.0 aperture. The motorised module is claimed to retract within 0.73 seconds during an accidental fall, similar to OnePlus 7 Pro (Review). On the software front, it runs Color OS and is backed by a 3765mAh battery with VOOC 3.0 support. Additional features like Dolby Atmos audio and Hyper Boost 2.0 gaming mode are present onboard. 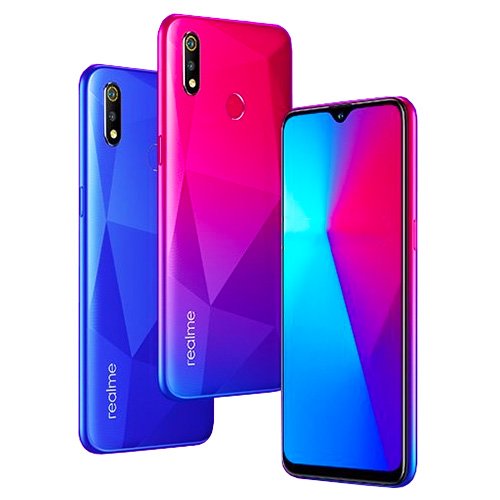 The Realme 3i, being a budget offering, brings a 6.2-inch HD+ (1520×720) display with a 19:9 aspect ratio and Gorilla Glass 3 protection, similar to the Realme 3. Moreover, it also sports a diamond-cut design with a matte finish, akin to the recently launched Realme C2.

Powering the phone is an octa-core MediaTek Helio P60 SoC, reminding us the company’s first-ever phone, i.e. the Realme 1. It is further coupled with up to 4GB of RAM and 64GB internal storage, which is expandable up to 256GB.

For photography, the phone gets a 13-megapixel primary camera with PDAF and f/1.8 aperture, followed by a 2-megapixel depth sensor. There’s also a 13-megapixel front camera for selfies. Amongst other specifications, the phone runs ColorOS 6 based on Android Pie and houses a 4,230mAh battery.

The Realme X price in India has been set at Rs. 16,999 for the base model with 4GB RAM and 128GB storage. Whereas, the top-end model with 8GB RAM and 128GB storage is priced at Rs. 19,999. The device will go in sale in Polar White and Space Blue colour options, starting July 24 at 12 pm. However, those who pre-ordered the device will be able to access Hate-to-wait sale on July 18.

Notably, the company has also launched two special editions for the device, including Realme X Master Edition which comes in Onion and Garlic theming for Rs 19,999, followed by the Realme X Spider-Man: Far From Home edition that comes in a special box with Spider-Man-themed case and icon pack, priced at Rs. 20,999.