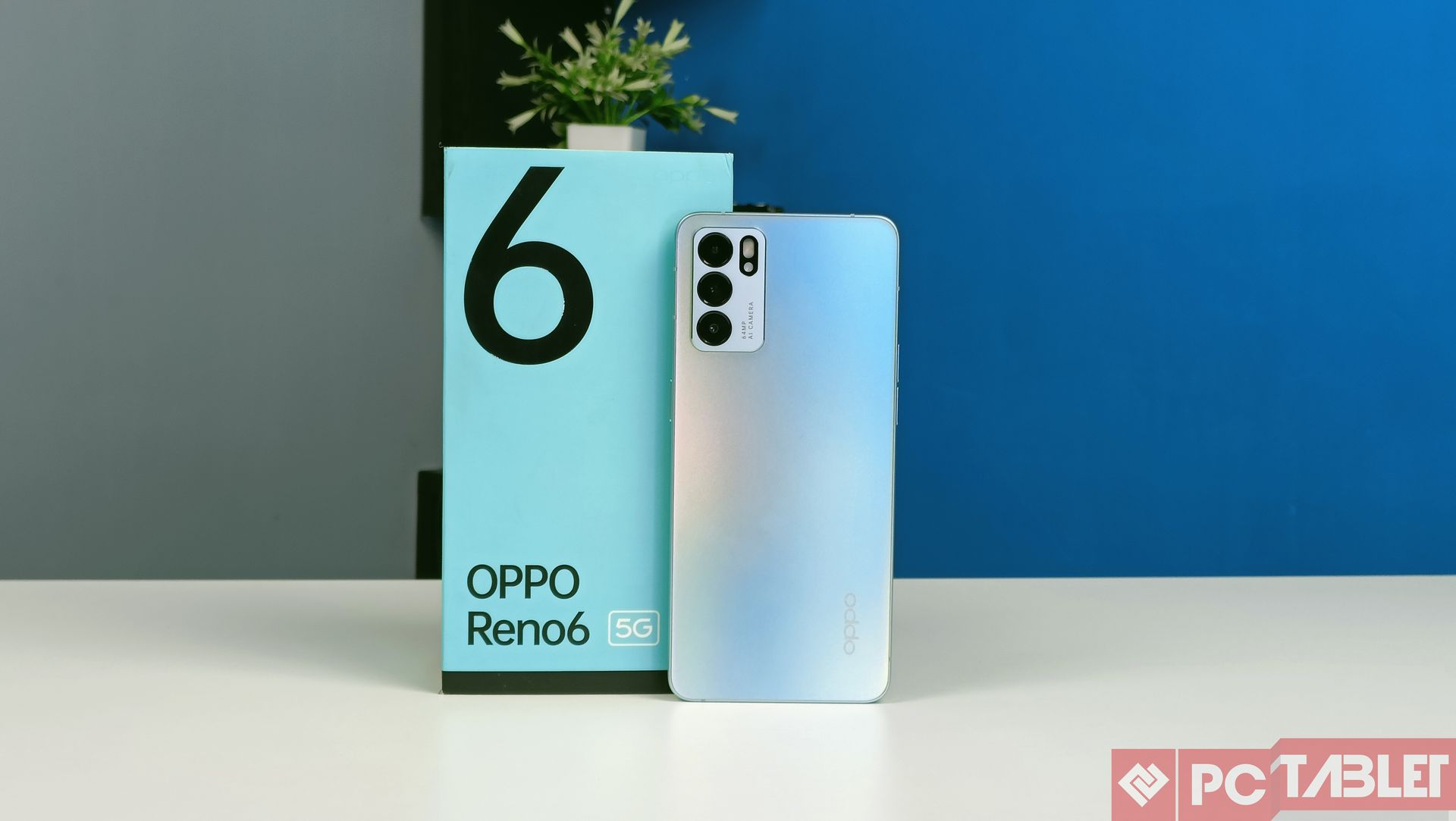 The Oppo Reno6 Pro brought subtle updates over the Reno5 Pro, but Oppo experimented with the vanilla Reno6. As a result, the phone has the most 5G band support in the market, packs the latest Dimensity 900 SoC and more while sticking to an affordable price tag.

Coming in at INR 29,999, the Oppo Reno6 goes head-on with the OnePlus Nord 2, Poco F3 GT, and the realme GT Master Edition. All these smartphones have something or the other to offer, but should you stick with the Reno6 5G? Let’s find out in our Review.

Before starting with the OPPO Reno6 5G review, let’s have a look at the phone’s specifications. 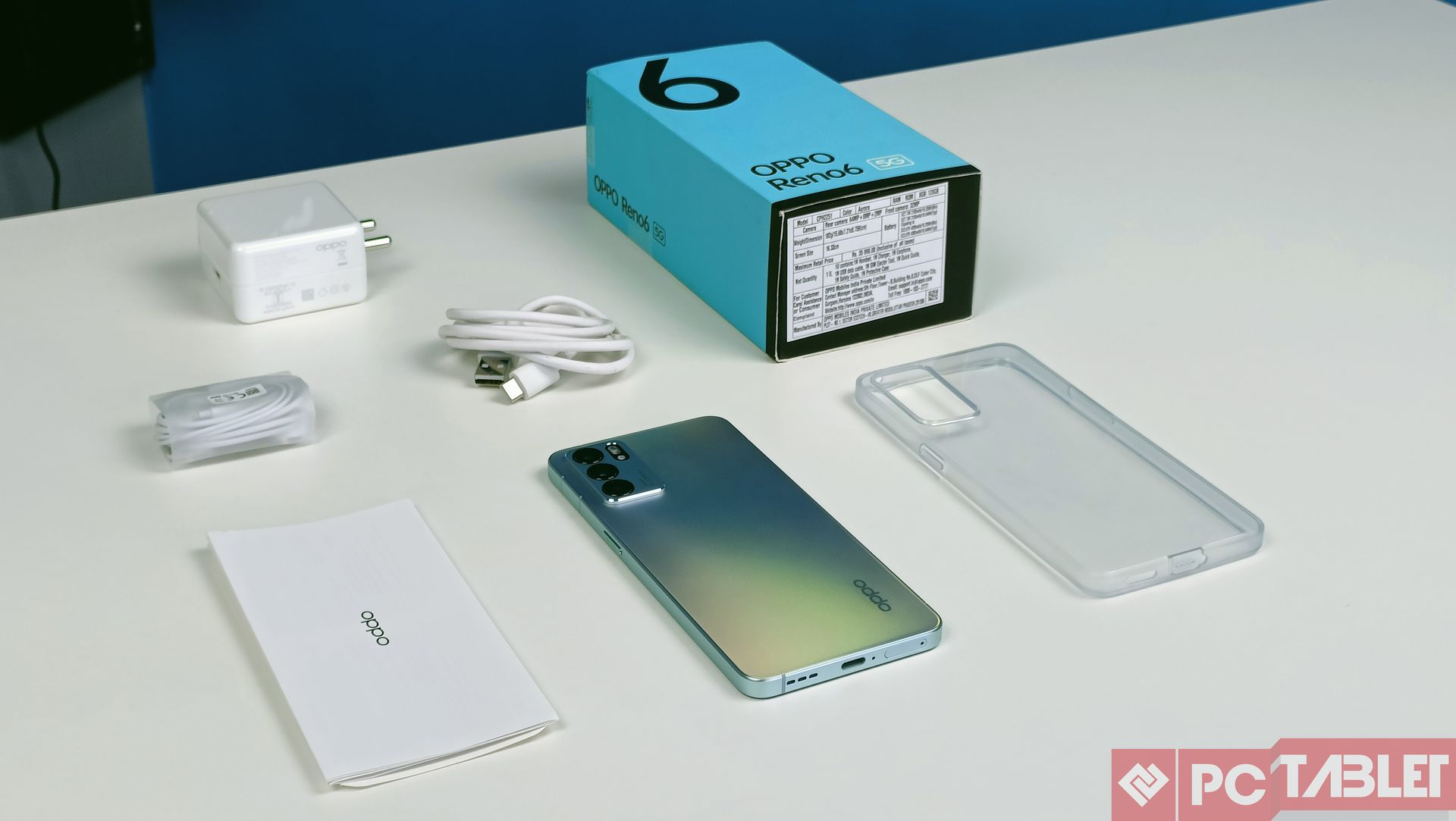 This is one area where the phone shines. Oppo has been making one of the best-looking phones, especially in the Reno series, but the Reno6 is something different. The phone comes in a candy bar form factor and gets glass on both the front and back. 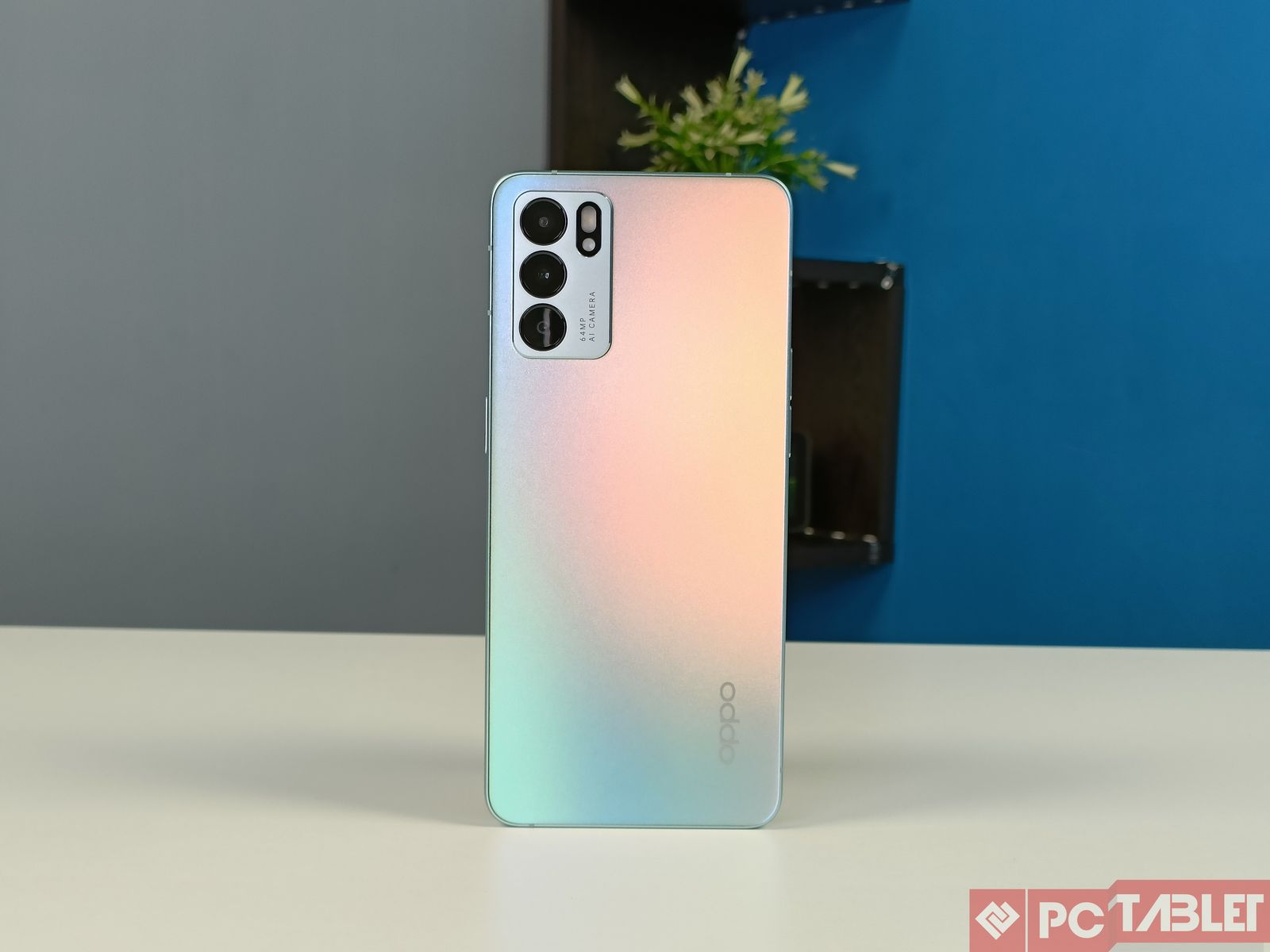 The frame is made out of aluminum and gets the iPhone-like flat pressed shape. The overall construction is solid, and the phone feels premium in hand. The phone is offered in two color choices, with the black model gets a textured finish on the rear. There is a triple camera module on the back left with the Oppo branding on the bottom. Unfortunately, the camera module is somewhat flushed here and doesn’t stick out.

On flipping the phone around, we get to see the gorgeous AMOLED display with tiny bezels on the top and sides. Moving to the button and port placement, the power button is on the right side, while the volume rockers are placed on the left rail. The 3.5mm audio jack has been removed on this speaker, and the USB Type-C port sits on the bottom, while the earpiece is sandwiched between the display and the outer frame.

Oppo doesn’t seem to have any corners in this area as well. We get a 6.43-inch FHD+ AMOLED flat panel with HDR 10 certification. Unfortunately, the refresh rate is capped at 90Hz, which was the same on the Reno6 Pro we reviewed a couple of weeks back. While we would have liked a 120Hz refresh rate panel, 90Hz would suffice for most users. 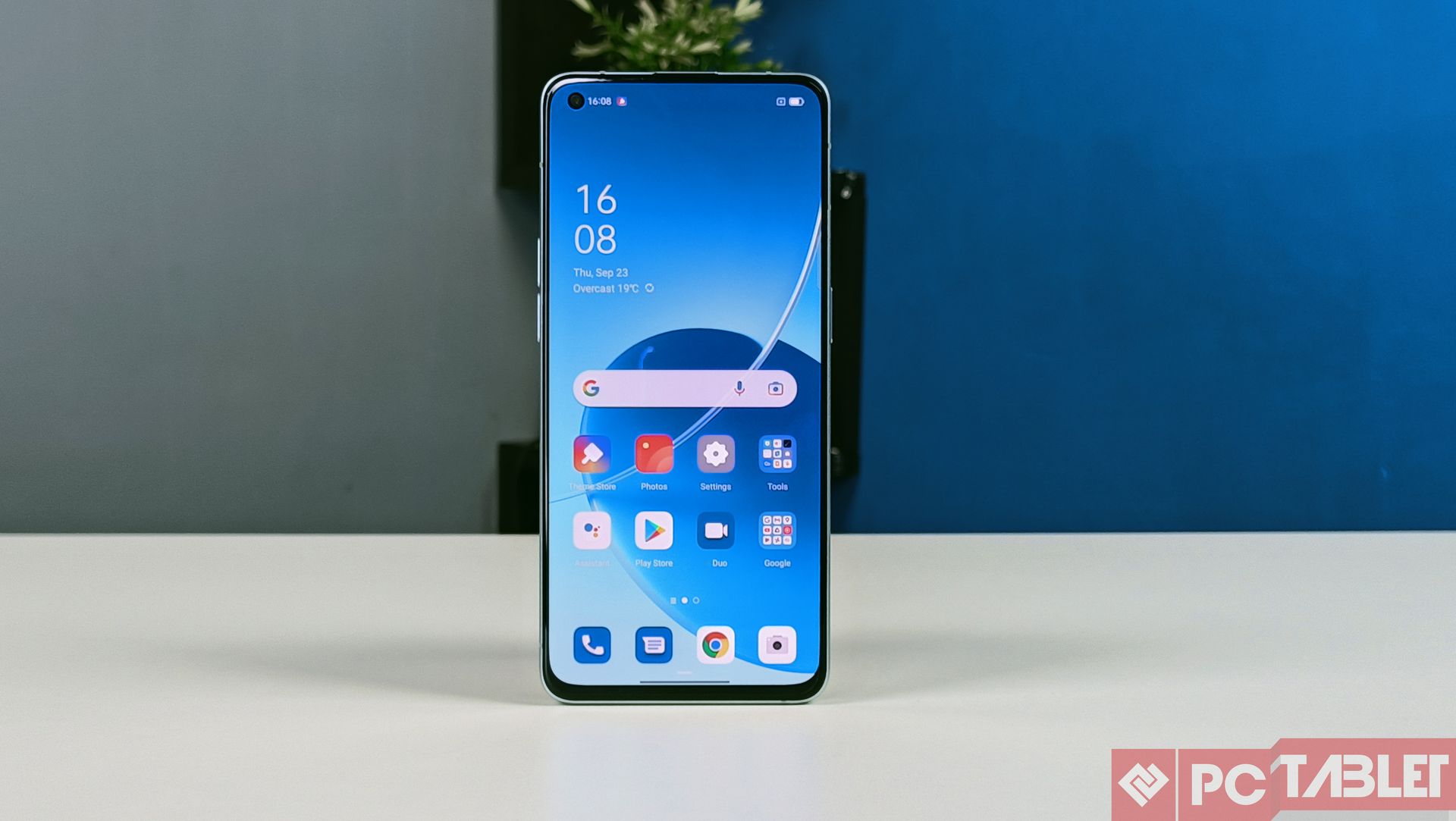 Out of the box, the display is set to show vivid colors, but you can tweak them as per your liking with the color profiles baked into ColorOS. The collection gets plenty bright outdoors and has a claimed peak brightness of 700 nits. HDR kicks in certain apps like YouTube and PrimeVideo while you get 1080p support on Netflix.

Coming to the software, the Reno6 gets the latest version of ColorOS. The phone runs on Android 11 with ColorOS 11.3 out of the box. With the unified experience going forward, it will be interesting to see if ColorOS gains some features from OxygenOS. Of course, you get plenty of customization options, from changing the themes to wallpapers, icons, and more, since ColorOS at its core is a decked-out skin on top of Android. 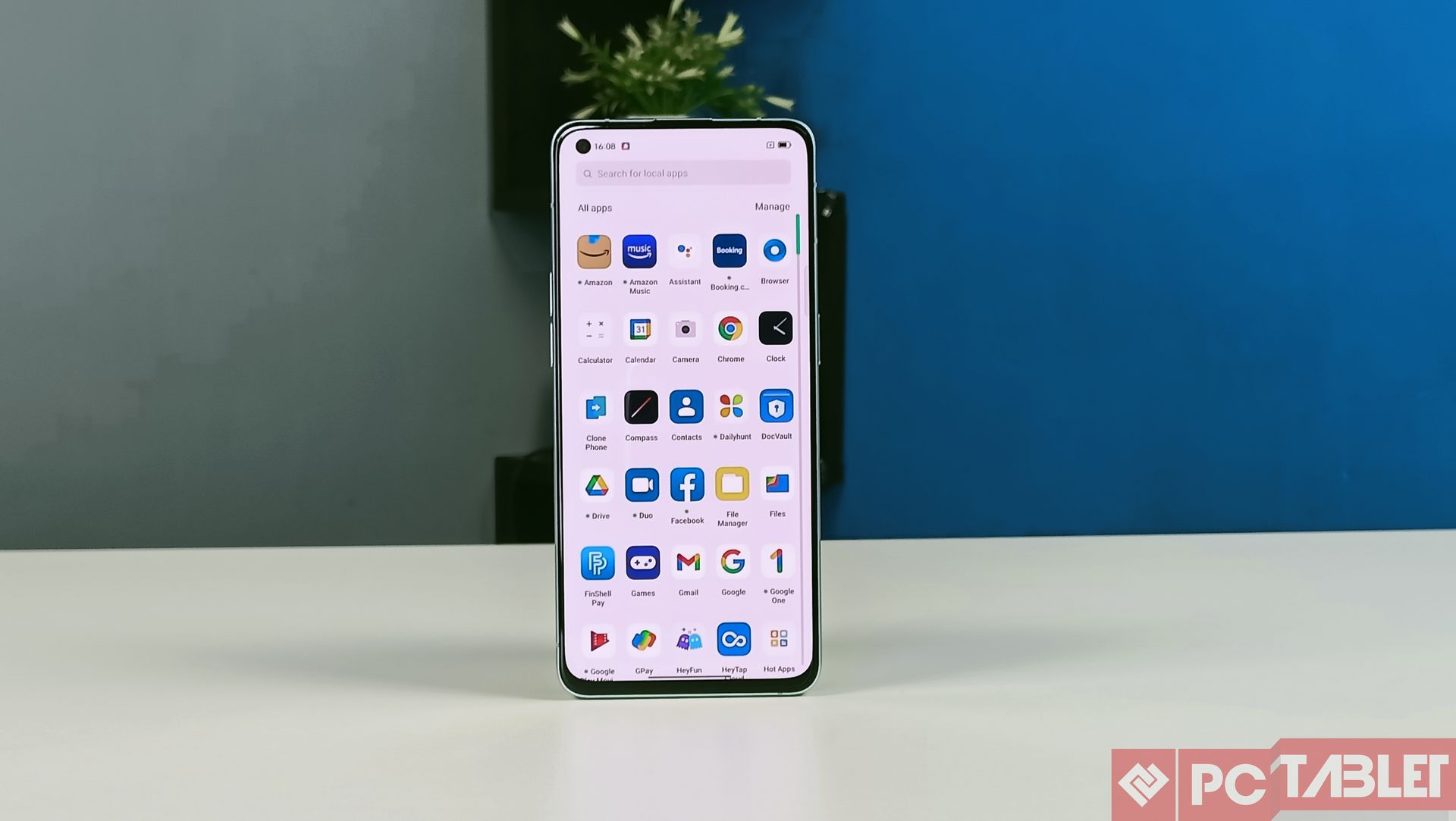 The UI is packed with features like the Game Mode, Dark Mode, and the OPPO Relax. There have been liberal use of AI done here from camera to display to performance. With this new build of ColorOS, we see less bloatware which is always welcomed. Since the phone comes with an AMOLED panel, you get the Dark mode here, Always On Display with many pre-sets and Edge lighting.

This is where the difference between both the Vanilla Reno6 and the Reno6 Pro is visible. While the Pro model is decked out with the top-of-the-line flagship Dimensity 1200 chip, the Reno6 gets the Dimensity 900. Reno6 is the first smartphone in the Indian market to feature this chip which was announced a couple of months back. 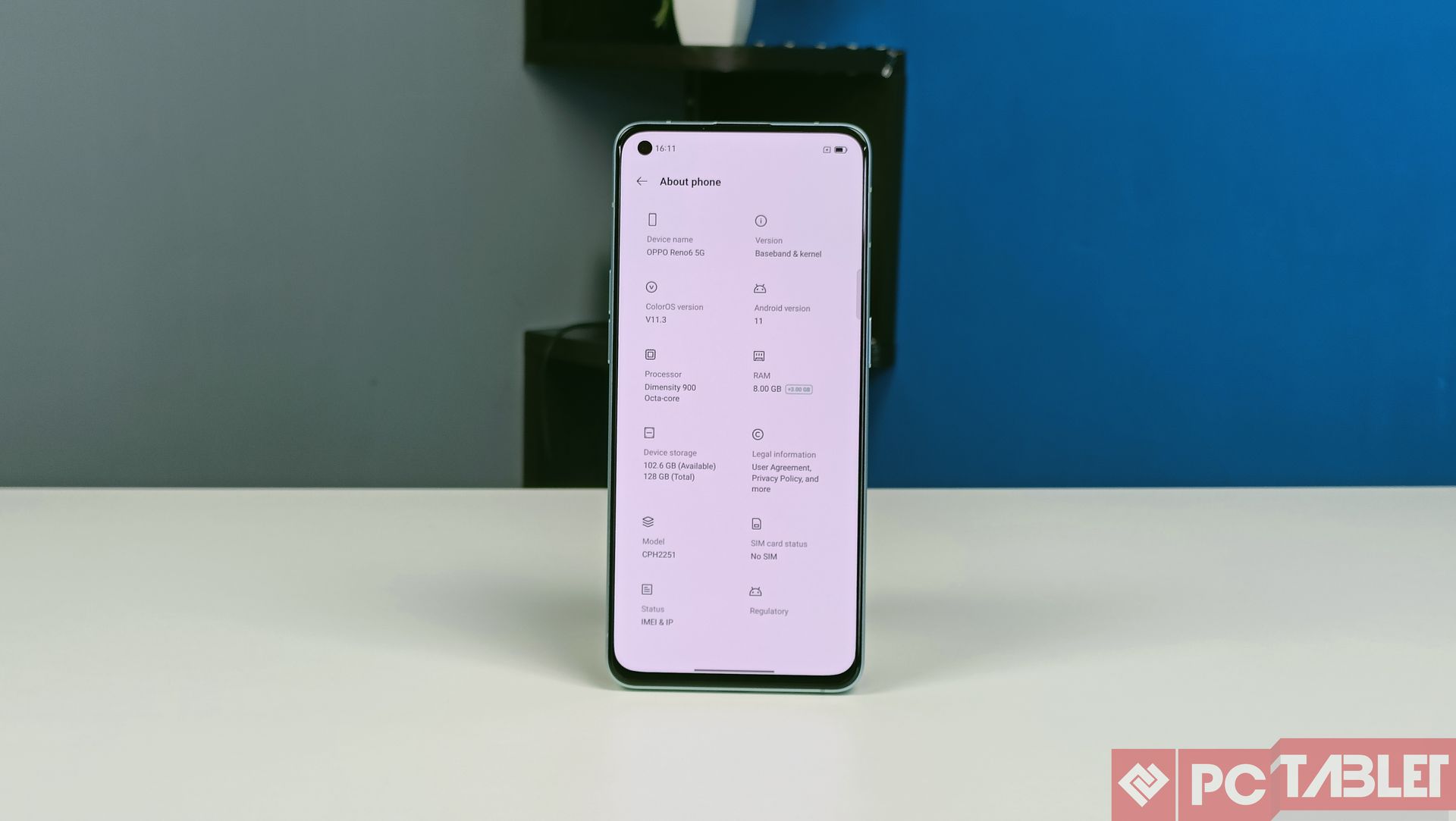 The MediaTek Dimensity 900 is made on the 6nm process and is both powerful and power-efficient at the same time. The Dimensity 900 is comparable to the Snapdragon 768G in terms of GPU and raw power for all the Qualcomm fanatics out there. However, this chip also brings some core and exciting technologies at a lower price point than Qualcomm chips like Wi-Fi 6, 5G carrier aggregation, and more than 5G bands in general.

There is a talk about 5G bands in the market currently, and you with the Reno6, you will get a piece of mind. Out of the box, the phone supports 13 global 5G bands, many of which are expected to be adopted by Indian Telecom operators. We didn’t notice any significant lags or overall sluggishness in the UI during our extensive phone testing. 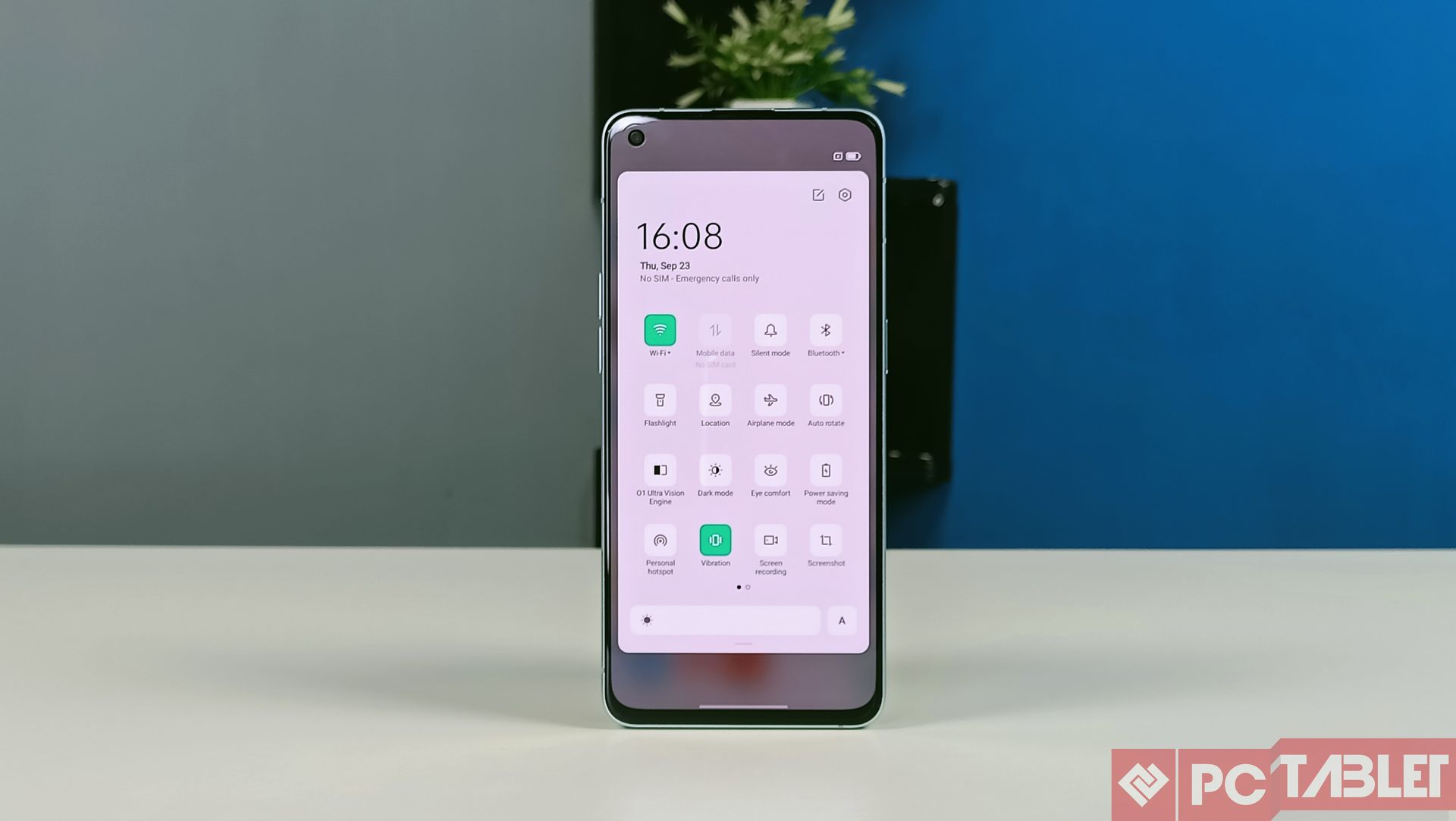 ColorOS has evolved into a much more fluid and polished UI. While the RAM management on ColorOS has always been good, we now also get Expanded Virtual RAM. This is quite common these days on custom skins. We did some gaming, and games like PUBG and Asphalt 9 ran fine on medium to high graphics settings very smoothly. The call quality, too, is excellent, and the speakers’ audio is loud and clear for the most part.

The OPPO Reno6 gets a relatively same camera system as the Reno6 Pro minus the 2-megapixel Monochrome sensor. Instead, there is a triple camera module, with the primary camera being a 64-megapixel sensor with f/1.7 aperture, assisted with an 8-megapixel wide-angle shooter with f/2.2 aperture, a 2-megapixel unit for macro shots. As for the front, the phone boasts a 32-megapixel shooter with a slightly wider lens. 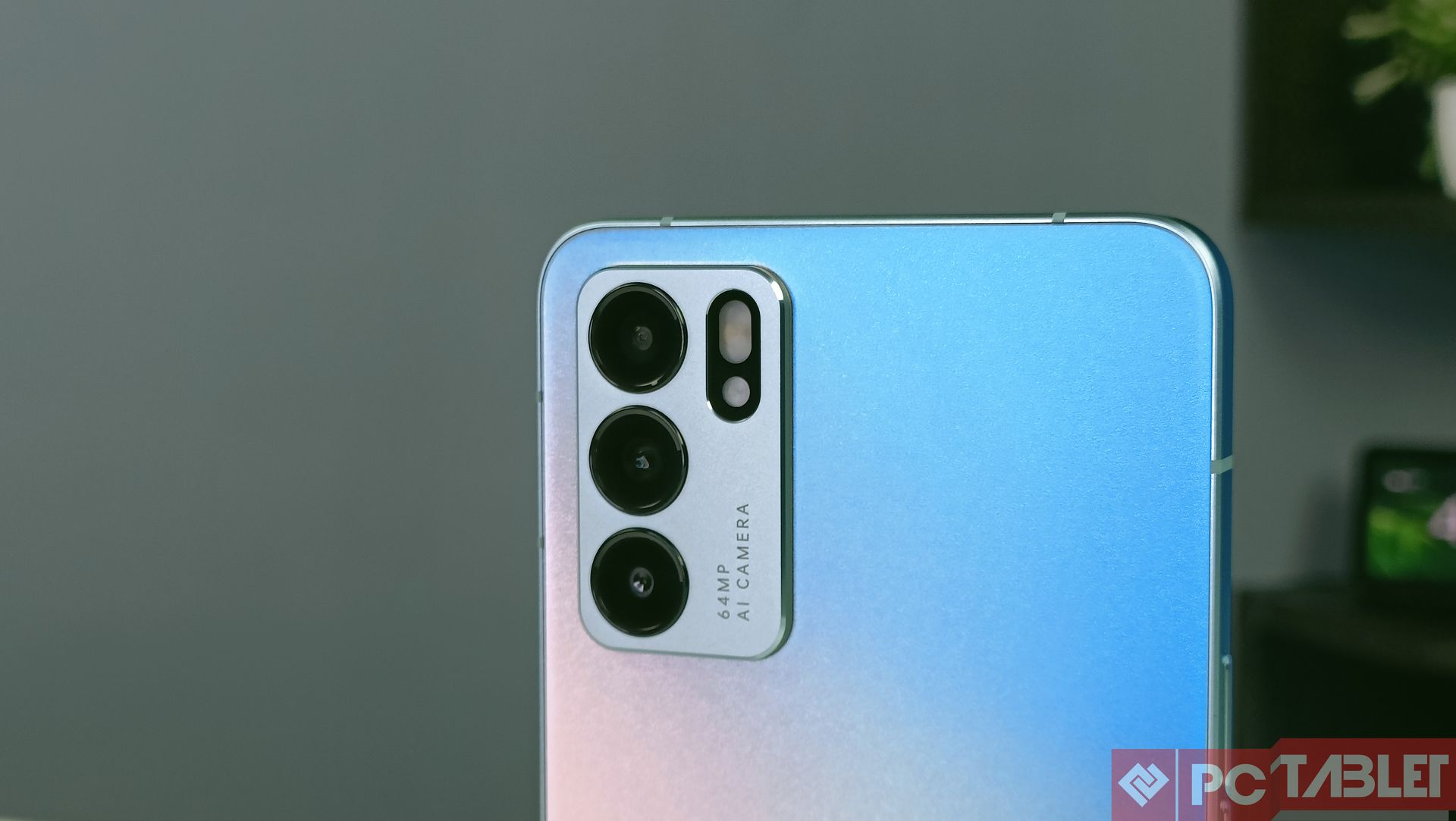 Oppo has been carrying over the same camera setup from previous generation Reno devices for some odd reason. That being said, images taken by the primary sensor are sharp, have lots of detail, and bear natural colors. The dynamic range is excellent, as well. However, for taking darker shots, we would recommend switching on the Night mode that helps in achieving good results. 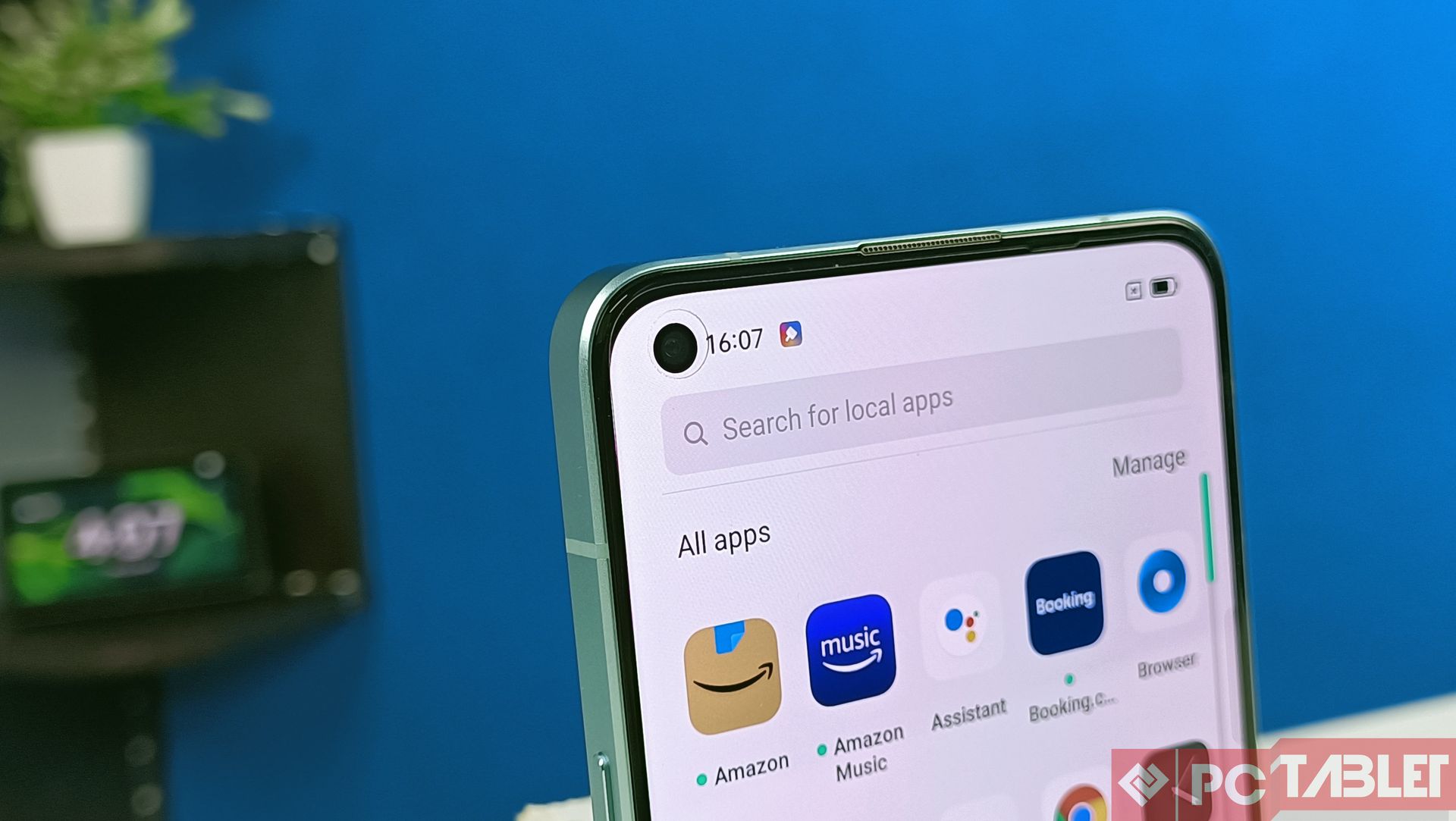 The wide-angle lens captures decent-looking shots with above-average details. The third lens is the macro one which is somewhat useless here. There is a liberal amount of AI here, from scene detection to Bokeh in video and more. The camera app layout is fairly simple and follows the standard oppo template. The front camera impresses as well, with the primary 32-megapixel Sony IMX616 sensor pumping out consistently well selfies that have plenty of detail in them. In addition, the skin tones are on the richer side.

Like the Pro model, the phone can shoot videos in 4K60 fps though the footage is not stable. For better results, we would suggest bringing the resolution down to 1080p. 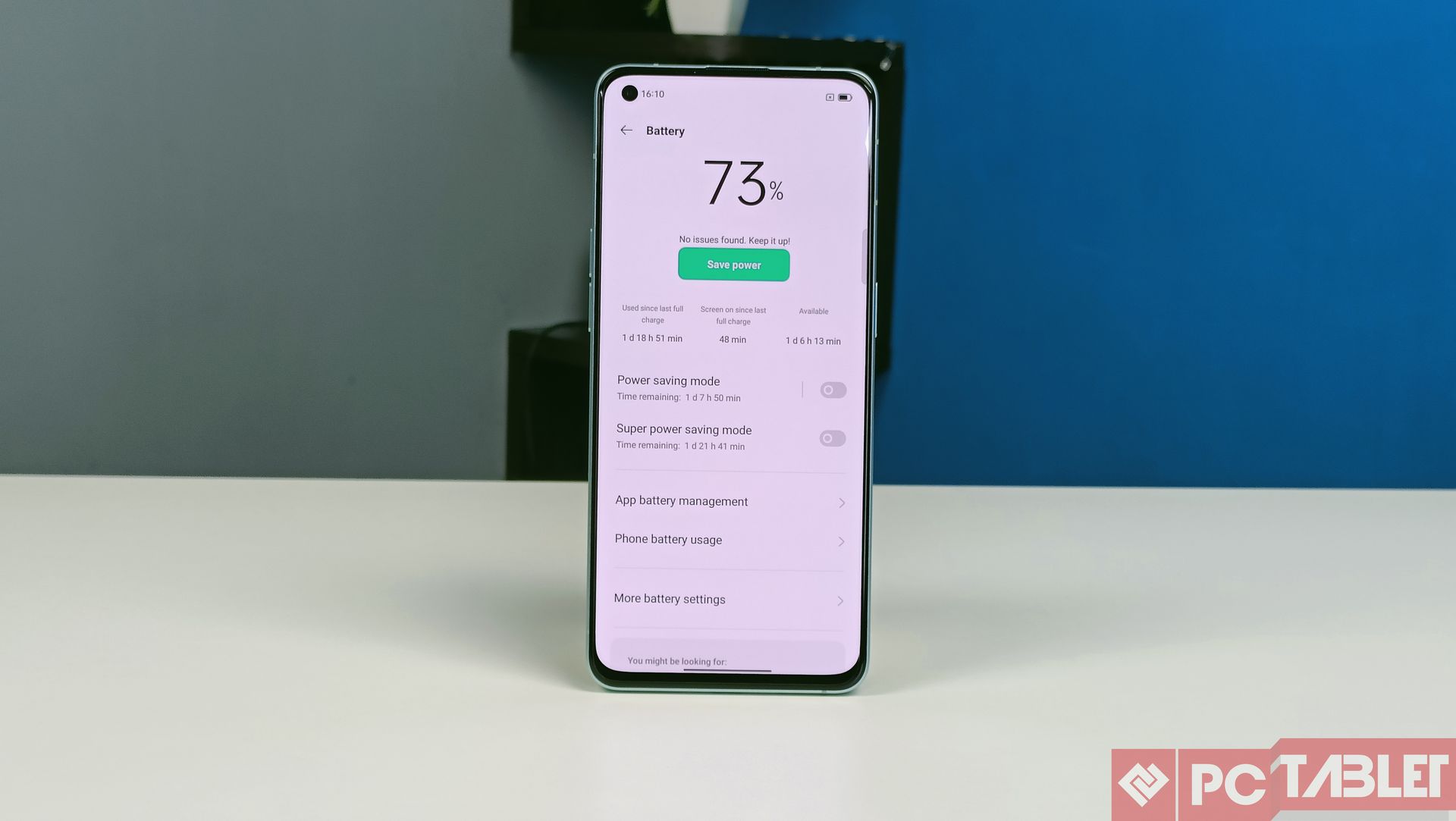 The Reno6 5G gets a reasonably decent 4,300mAh battery under the hood. The phone lasted for a full working day with a screen ranging from six to seven hours on medium to heavy usage during our testing. Of course, our heavy use included a bit of gaming, content consumption, usual texting, and high camera usage.

Using OPPO’s proprietary SuperVOOC 65W fast charging tech, we could charge the phone to 50% in under 20 mins, and a full top-up was done in a little over 40 minutes.

When compared to the Pro model, the Reno6 lacks the sheer speed of a flagship SoC and that slim build. But for INR 10,000 less, this model makes much more sense. You get a good AMOLED 90Hz panel, the latest processor with ample 5G band support. On top of this, it shares the same camera system as that of the Pro model. The only issue we have is with the limited 128GB storage and low-light camera performance.

We collect information from many stores for best price available