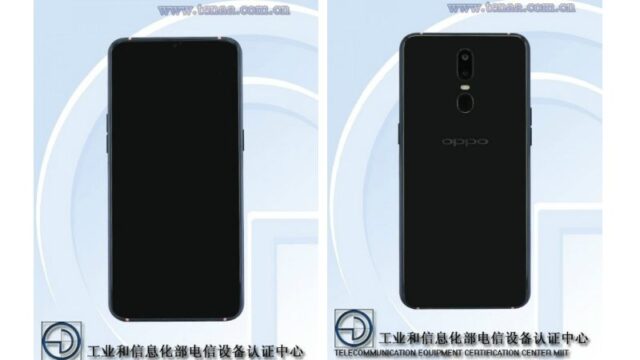 It appears Oppo another handset in the tow. After launching the flagship Oppo Find X, the company is all set to announce the Oppo F9. Now, a TENNA listing suggests that the Chinese manufacturer is gearing up for the launch of the Oppo R17.

The listing does not reveal the handset’s specifications, though gives us a good idea about its design. The TENNA listing reveals two model numbers – PBEM00 and PBET00. One of the leaked images show the front of the handset tipping at waterdrop-like notch display, similar to the one found on Essential Phone.

The other image shows off the back of the handset revealing vertically stacked dual rear cameras along with a fingerprint sensor housed just below the camera module. Besides, we can see the volume rockers housed on the left edge while the power/standby button sits on the right edge. Finally, the images indicate that the Oppo R17 will sport a glass back with metallic edges.

The TENNA listing does not reveal the specifications, however, a Weibo user has allegedly shared the spec sheet of the Oppo R17. According to the leaked spec sheet, the Oppo R17 will boast a 6.4-inch AMOLED display having a screen to body ratio of 91.5 percent. Earlier leaks also indicate that the handset will come with the latest Corning Gorilla Glass 6 screen protection. Under the hood, the handset will run Snapdragon 670 processor bundled with 8GB of RAM and 128GB of built-in storage. The back of the handset will have 16MP+5MP dual rear cameras with Super Night Mode. For selfies, the handset is said to feature a 25MP front-facing shooter.

The leak further indicates that the device will run Android 8.1 Oreo with ColorOS 5.2. Juicing up the device, meanwhile, will be a 3500mAh battery with support for VOOC fast charging. As far as release goes, the Oppo R17 is expected to go official by the end of August or early September.