Unveiled in China last year, the Oppo K1 has finally received a green signal for the Indian market. The new model is scheduled to launch on February 6 in the country, as confirmed by Flipkart.

Notably, the Oppo K1 is a premium mid-range smartphone by the company. Major highlights of the handset include an in-display fingerprint scanner, Snapdragon 660, 6GB RAM and a 25MP AI-selfie camera. As far as the design is concerned, it looks identical to the Oppo R17X Neo smartphone launched earlier in Japan.

Previously, Flipkart teased the arrival of Oppo K1 with an in-display fingerprint sensor technology at an “unbelievable price”. Now, the e-commerce giant, with a dedicated microsite has marked the launch of the handset at 12 PM, on February 6 in India. 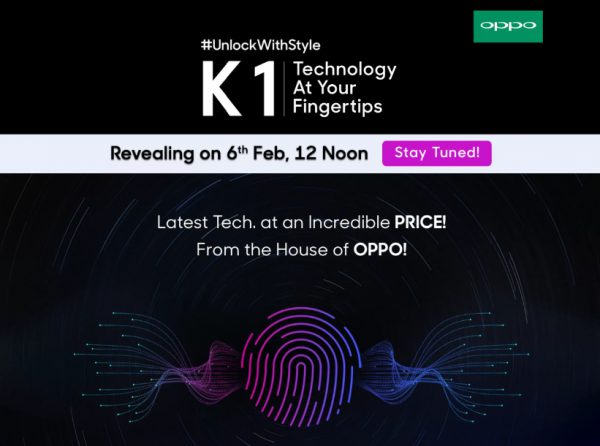 The device retails in Mocha Red and Van Gogh Blue in China and the same is expected to arrive in India. With Flipkart touting “unbelievable price”, we can expect a price of somewhere around Rs. 20,000 in the country.

Keeping that in mind, the Oppo K1 could possibly be the cheapest smartphone to offer an In-display FP in India, beating Vivo V11 Pro. That being said, Vivo too has plans to launch a new smartphone with pop-up selfie camera and under display fingerprint scanner by this month.

The Oppo K1 sports a 6.4-inch AMOLED display with a Full-HD+ resolution of 1080 x 2340 pixels in a 19:9 aspect ratio, thanks to the little water-drop notch. Furthermore, the display houses an In-display fingerprint scanner for unlocking the phone. Overall, the phone bears an impressive screen-to-body ratio of 91%.

Powering the phone is the Qualcomm Snapdragon 660 AIE SoC at its core, coupled with 4/6GB of RAM and 64GB of internal storage which can be further expanded using a MicroSD card (up to 256GB).

For photography, the Oppo K1 gets a horizontally stacked pair of dual cameras at the back, featuring a 16-megapixel primary shooter coupled with a 2-megapixel depth sensor. While on the front, it gets an AI-powered 25-megapixel unit for selfies.