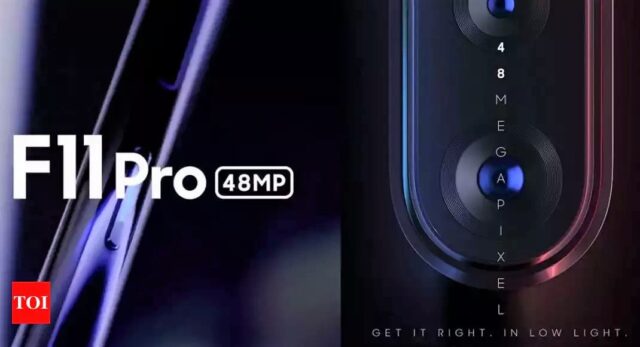 After Vivo, the Chinese giant Oppo has now teased a new smartphone with a pop-up selfie camera. Dubbed as Oppo F11 Pro, the device was lately teased by the company.

Notably, the smartphone will feature a motorised selfie camera, just like the upcoming Vivo V15 Pro. The Oppo F11 Pro will also bear a 48MP primary camera housed in the rear camera module. Moreover, the teaser revealed by the company touts “Brilliant Portrait in Low-Light.” The same indicates low light imaging capabilities of the handset.

The Oppo F11 Pro was previously leaked in a Youtube video. It was followed by a number of teasers posted by the company later on. The leaked video shows off a full-view display with a water-drop notch on top. The earpiece too resides above the same. The device is showcased in Thunder Black and Aurora Green colour schemes.

Interestingly, there is a dual camera setup at the rear, stacked vertically along with an LED flash. The setup resembles the one on the Vivo V11 Pro. As mentioned, the front camera is hidden within the pop-up slider on the top frame. Lastly, the handset bears curved edges with a speaker grille and USB type-C port at the bottom.

Specifications of the Oppo F11 Pro are yet to be known, and we expect the same to be revealed soon by future leaks and reports. The last smartphones in the F-series, i.e. the Oppo F9 and F9 Pro touted Super VOOC charging, 6.3-inch full HD+ LCD display, MediaTek Helio P60 SoC and up to 6GB of RAM. That being said, let’s wait for the brand to unveil the launch date of the handset officially. Stay tuned.