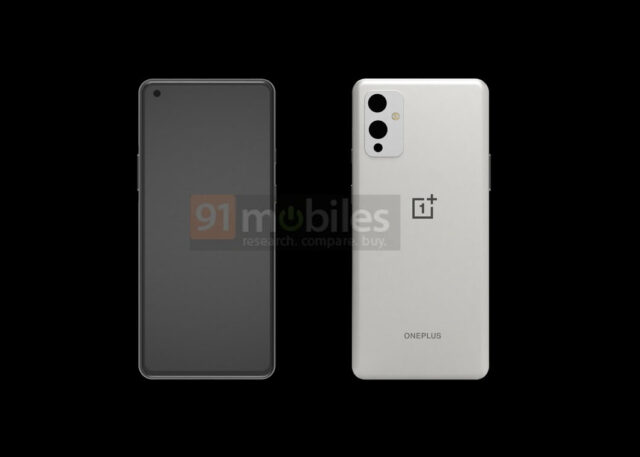 The OnePlus 9 is not expected to be ready for a market debut by around March 2021 though we already have here a CAD rendering of the phone courtesy of 91 Mobiles. As per what the render reveals, the OnePlus 9 will come with a flat front display with a punch hole along the top left for the selfie cam.

However, the biggest change is seen with the rear which incorporates a curved design while the other highlight is the new rectangular camera layout along the top left corner. The camera module, again, is dominated by three vertically stacked lenses, two of which are rather large and similar sized. At the bottom is a smaller lens while the LED flash is placed along the side. It is not known though what the exact specs of the rear or front camera of the phone is going to be like.

The display however is believed to be all of 6.65-inches, which makes it bigger than the 6.55-inch display of the OnePlus 8T. Other features of the display include its 120 Hz refresh rate. Bezels on all sides are just the bare minimum, to the extent of being non-existent as well.

There is not much that is known about what the interior of the phone will come with though a Snapdragon 875 heart is almost a surety. An OnePlus 9 model was also spotted on the Geekbench website where the model was shown to come with 8 GB of memory. The processor wasn’t confirmed but is believed to be the upcoming Qualcomm flagship chip.

The Geekbench listing for the phone having the codename Lahaina also revealed Android 11 as the pre-installed OS for the handset. Battery size is still a mystery though a 65 W fast charger should be available given that the OnePlus 8T also provides the same.

Reports have indicated there is going to be two flagship OnePlus models – OnePlus 9 and OnePlus 9 Pro for next year. This again contradicts previous leaks which claimed three OnePlus 9 models to be released next year.

We will be tracking all the developments here. Keep watching.