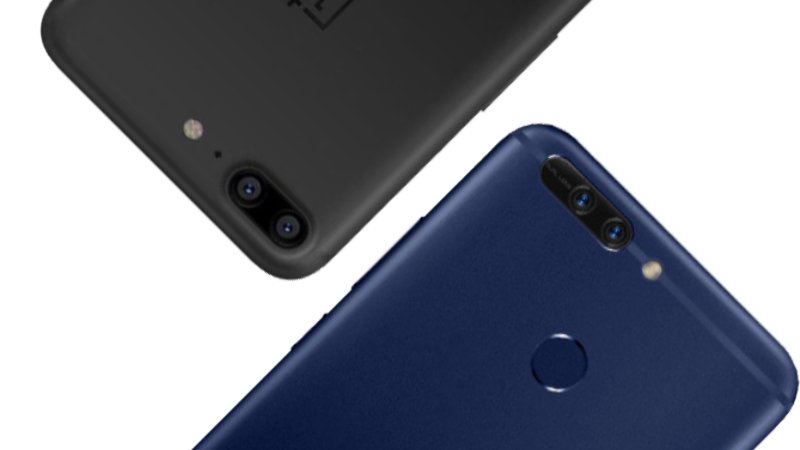 OnePlus made a lot of buzz regarding its new dual camera setup in their latest flagship the OnePlus 5 but Huawei showed up with their Honor 8 Pro to tackle the flagship of OnePlus. Both the phones share a dual camera setup and both share some excellent feature, let’s take a deep look at both smartphones camera.

When it comes to the feature section then I must say both the phones are flooded with different features, OnePlus 5 shares the special Portrait mode whereas the Honor 8 has the special monochrome mode.

There are many features which can be found in both the cell phones i.e. Manual mode, time lapse, slow motion videos, panorama and much more. Both phones are capable of recording 4k or UHD videos @30fps and 1080p resolution video @60fps. OnePlus 5 features a 2x optical zoom and a digital zoom too but Honor 8 Pro only features a digital zoom.

Coming onto this section, both the devices scored good marks when it came to the picture quality in daytime. The pictures looked good and colors came out beautifully, the pictures were looking good from all aspects but somewhere Honor 8 Pro had the upper hand in the daytime as it was faster in focusing the subject, photos were sharper and detailed when compared to OnePlus 5.

While shooting in artificial light, OnePlus 5 surpassed Honor 8 Pro in terms of color balance and getting the perfect exposure but when it came to focusing subjects Honor 8 Pro hits the mark again, it was faster than the OnePlus 5 in focusing small objects.

Coming onto low light, in this section OnePlus 5 beats Honor 8 Pro by a great margin, Oneplus 5 shots in low light were way better than the one shot on Honor 8 Pro but images from both the devices were grainy, flash has to be fired in order to save the photo. They both have to work a lot in the field of noise reduction technology.

Coming onto the selfies section, both phones score good marks when it came to selfies under daylight, photos were clear and detailed but when it came to artificial and low light, OnePlus 5 scores better. Selfies from OnePlus 5 was sharp and detailed whereas in Honor 8 Pro selfies were smooth because of the beauty feature and at the end, It’ll come down to the user’s personal preference.

Both the devices are capable of recording UHD or 4k videos @ 30fps and 1080p full HD videos @ 60fps. When it came to video recording both the devices were able to record a smooth video while shooting in 1080p resolution @ 60fps. Clarity was good and color composition was good too, colors look rich and vivid.

But while recording in 4k, I was disappointed by both the devices. They both lagged in as we started the recording. The videos were sharp and detailed no doubt in that but weren’t that stable as both devices lack OIS (Optical image stabilization), EIS does a decent work but can’t be compared to OIS or Cinematic Video Stabilization.

They both share some lack in their 4k recording algorithm as in the OnePlus 5 you can only record only 10 minutes of 4k at a time whereas the Honor 8 Pro uses a compression feature to compress the 4k videos shot on the devices, so you need to convert the 4k videos if you wanna play it in the standard players.

Portrait Mode or the Monochrome Mode

As things go down to the wire, OnePlus 5 features a portrait mode in which it uses the telephoto lens to create a depth of field or the bokeh effect whereas in the Honor 8 Pro it uses its monochrome lens to capture stunning black & white or grayscale images.

The monochrome mode takes stunning images, pictures are detailed and cannot be compared to anything else. They’re just brilliant, there’s no such feature in OnePlus 5 to tackle this.

Coming onto the next section, both the devices feature a pro mode or manual mode in their camera algorithm to allow someone change the settings according to his/her needs. The manual photo mode in OnePlus 5 is better than the one in the Honor 8 Pro, as it also features a histogram and allows you take pictures in raw which itself is a huge thing to consider.

But the Honor 8 Pro doesn’t stay back, it comes up with its pro video mode too which allows you change some advanced settings involved in the video recording and comes in handy for someone who’s got basic knowledge about videography, whereas OnePlus 5 doesn’t get anything to tackle this.

Both the phones are capable of accomplishing the different task and both are special in their own special way. So if you’re looking for a phone with a good picture and video quality, OnePlus 5 is the phone for you but if you can adjust the camera quality in order to get some marvelous features, Honor 8 Pro is the device. This device got a good camera as well but falls back in some scenarios.

Four Online and Offline Methods To Kick-Start Your Small Business

How To Minimise Boredom Within The Business Environment