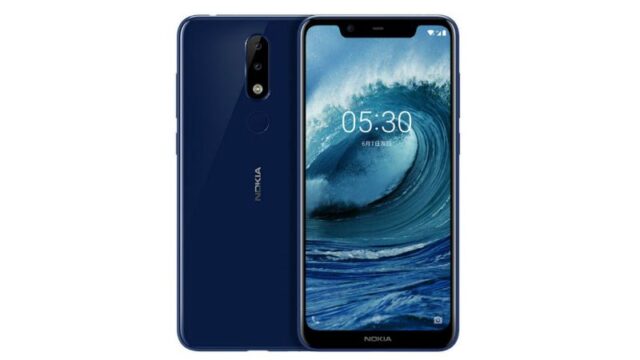 New leak of the upcoming Nokia X5 (Nokia 5.1 Plus) have surfaced online. As alleged press renders of the upcoming handset are now doing rounds on the web ahead of its official launch on July 11.

Based on the leaked image, the Nokia X5 looks much like the recently launched Nokia X6. However, it does appear to have a seemingly larger notch and thicker bezels. On the rear, the handset retains the glass back finish along with a similar layout of the dual camera setup and fingerprint sensor found on the Nokia X6.

The Nokia X5 is said to go official in China this week and launch internationally as the Nokia 5.1 Plus. As per earlier leaks, the handset is said to sport a 5.86-inch HD TFT display having an aspect ratio of 19:9. Under the hood, the handset will likely get powered by Snapdragon 600 series processor or MediaTek’s Helio P69 processor.

The device is also expected to be offered in different RAM and storage configurations. These include 3GB, 4GB or 6GB RAM and 32GB or 64GB on-board storage. The handset is said to come in Black and Blue colour variants at launch, however, more colour options are also expected.

In the photography department, the handset will come equipped with a 13MP+5MP dual lens configuration. For selfies, the device is expected to feature an 8MP front-facing shooter. The phone will run Android 8.1 Oreo out-of-the-box while juicing the handset will be a 3000mAh battery.

As far as pricing goes, key sources indicate that the Nokia X5 will go official in China this week for a price of less than CNY 1,000 (Rs. 10,400 approx).

More details about the handset will be announced during its official unveiling in China on July 11. We’ll update you as soon as we hear anything new. Until then, keep checking back for more.