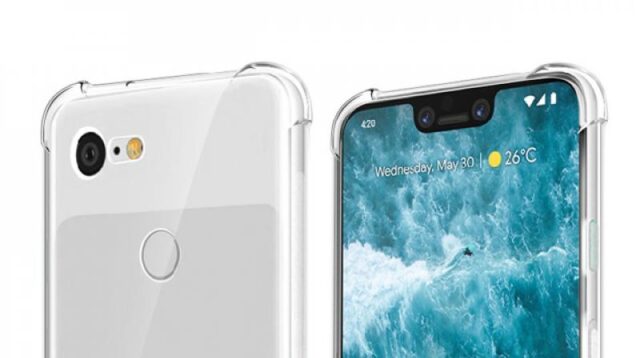 We’ve already come across numerous leaks of the upcoming Google Pixel 3 range. A lot has been leaked about these handsets including key specifications and design. Now, a Chinese case manufacturer has given us yet another purported look at the upcoming Pixel 3 XL device.

The latest leak yet again suggests that the Pixel 3 XL will have a notched display. This makes sense as Google has more or less confirmed that the upcoming Android P would support notched-displays from the get-go. In addition, it also confirms that Google might stick with single-lens primary camera on the device, despite the widely-adopted trend of dual rear cameras. The leak further shows an LED flash as well as the rear-mounted fingerprint scanner.

The leak falls in line with earlier rumours of the handset. As leaks in the past had indicated that the Pixel 3 XL would feature a notch while its smaller sibling would not.

In other related news, both Google Pixel 3 and Pixel 3 XL were spotted on benchmarking database Geekbench a few days back. The benchmarks indicated that these devices would run the latest Snapdragon 845 processor bundled with 4GB of RAM. Besides, they were also spotted running Android P, Google’s next-generation mobile OS which rumoured to release on August 20. The benchmark listing also revealed that the handset pulled-off single and multi-core scores of 2426 and 8355 respectively.

Google is expected to announce the Pixel 3 and Pixel 3 XL sometime during ‘Fall’ this year. That being said, rumour also has it that Google might end up unveiling these devices before announced the Pixel 2 and Pixel 2 XL last year. We’ll update you as soon as we hear anything new. Until then, keep checking this space for more.