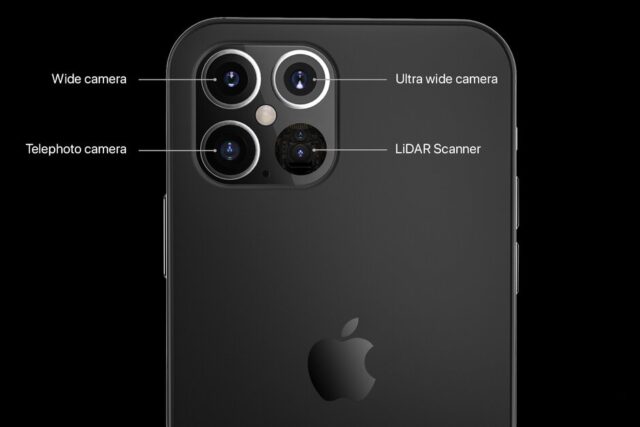 Leaks and speculations pertaining to the iPhone 12 continue to stream in thick and fast even though it might still be a few months for the phone to be officially launched. This time, reports claim Apple might opt for a quad camera system for the iPhone 12 Pro and iPhone 12 Pro Max.

The report is based on a leaked sketch that is believed to be that of the upcoming iPhone and is based on an iOS 14 build that too got leaked recently. And according to what has come to the fore, it might be four sensors that could be adorning the rear camera module on the iPhone 12 Pro and iPhone 12 Pro Max, the fourth being a LiDAR sensor for enhanced AR applications.

Apple has already provided for a LiDAR sensor on the iPad Pro launched a few weeks back though the same on the iPhone 12 seems a bit bigger in size, and maybe in its scope as well. This should allow for better and more accurate mapping of the object in the vicinity of the iPhone 12, leading to more realistic gameplaying or whatever application Apple envisages for the functionality.

The fitment of the LiDAR sensor has also led to slight re-adjustment of the other sensors, and more particularly, the LED flash and the mic. For instance, the wide angle camera is seen placed the top left most corner while immediately below it is the telephoto camera. On the top of the second vertical stack is the ultra-wide angle lens with the LiDAR scanner sitting right below it. The LED flash is bang at the centre of the camera module with the mic at the centre of the bottom edge.

As things stand at the moment, the iPhone 11 series is already highly acclaimed for its camera prowess. Things are only expected to get better with the next iPhone variant with the additional LiDAR sensor that could make it stand one-up vis-a-vis the competition.

As for other rumours linked to the iPhone 12 at the moment, word has it that the wait for a Type-C port on the Apple device might have stretched a bit longer. Or better still, we might even see an iPhone variant completely devoid of any ports, though that might be a reality only with the iPhone 13 or later variants. Also, we might well have seen the last of notched iPhones, with the iPhone 12 likely adopting a notch-less design. A 5G variant too may not be too far away as well.

Expect more details to emerge as we drift closer to the launch that is likely to happen around fall this year.