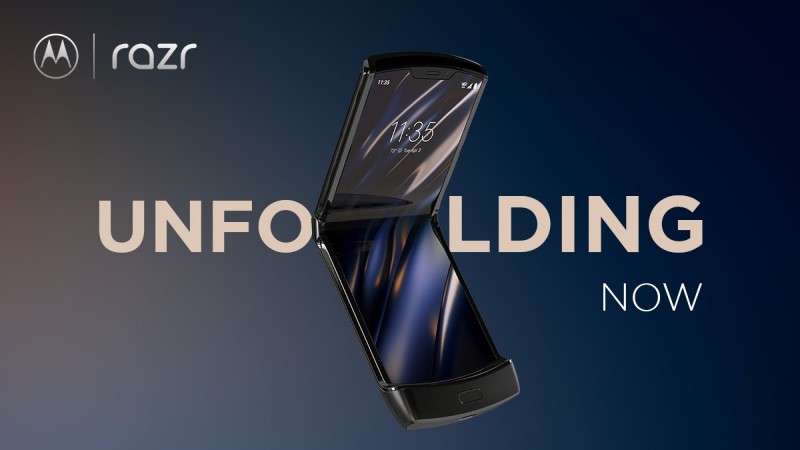 After teasing the 2019 Motorola Razr India launch for a while now, the company has now finally confirmed the event for March 16 in the country. For starters, the 2019 Razr is a refreshed version of the Moto Razr V3 from 2004 and was unveiled first in the US, last year in November.

The device comes with a foldable clamshell design with a hinge mechanism, allowing the phone to shut with both sides perfectly flush. It also gets a secondary display for basic operations and access to notifications without opening the phone.

As for the specs, the new-gen Motorola Razr features a 6.2-inch foldable pOLED screen with an HD+ resolution of 2,142 x 876 pixels and 21:9 Cinemavision aspect ratio. Like mentioned, there’s also a secondary 2.7-inch gOLED panel that has a resolution of 600 x 800 pixels and a 4:3 aspect ratio.

Powering the phone at its core is the mid-range octa-core Qualcomm Snapdragon 710 processor. It is coupled with Adreno 616 GPU, 6GB of LPDDR4x RAM and 128GB of internal storage.

In the camera department, the phone has a single 16-megapixel rear camera with a Sony IMX519 sensor, f/1.7 aperture, 1.22um pixel size, EIS, and Dual Pixel autofocus (AF). For selfies, there’s a 5-megapixel front camera with f/2.0 aperture, housed in the notch. Thanks to the dual displays, you can also use the primary camera to click selfies when in the folded state.

On the software front, the Razr runs stock Android 9 Pie with customisations by the company. All of this is powered by an average-sized 2,510mAh battery that supports 15W fast charging. Motorola has also include splash-proof water-resistant nano-coating and a fingerprint sensor on the bottom.

Connectivity options like 4G LTE, Wi-Fi 802.11ac, Bluetooth v5.0, GPS/ A-GPS, and USB Type-C port are present onboard. Unfortunately, there’s no 3.5mm jack on offer, and the global version only supports e-sim; no physical sim for now. Therefore, it’d be interesting to see if that continues for the Indian market. Lastly, the phone measures 72mm x 94mm x 14mm in the folded state and weighs 205 grams.

Motorola sells the device as Verizon-exclusive for a price tag of $1,499 in the US, which roughly translates to about INR 1,06,000. The company is likely to price it similar, upwards of Rs 1 Lakh in the country.

The device’s closest competitor from Samsung- the Galaxy Z Flip currently sells for Rs. 1,09,999 in the market. Here’s a spec-based comparison between both the phones if you’re interested. That said, wait for the launch scheduled on March 16 for exact information on Indian variant specifications, pricing, availability and launch offers.