Apart from the flagship Moto Z, Motorola also launched a low-cost alternative in the form of the Moto Z Play. The smartphone has all the modular shenanigans like its flagship counterpart, however, comes at a much cheaper price tag. Priced at Rs. 24,999, the Moto Z Play still isn’t the most affordable mid-range smartphone out there. At this price point, it is in direct competition with the likes of the OnePlus 3 and Xiaomi Mi5, both of which are top-notch Android smartphones. But has it got enough to hold on its own? Let’s find out in our review?

The Moto Z Play is a replica of the flagship Moto Z, with the same camera bump and a similar fingerprint sensor that looks like a home button. Though at 6.99mm, it’s not as sleek as the Moto Z but still feels rather comfortable and secure in the hand with its subtly curved edges.

Besides, it also gets the standard 3.5mm jack. Button placement is the same as the Moto Z – with volume rockers and power button housed on the right, along with a USB Type-C port at the bottom. Flip the device over, and you see a large camera bump emblazoned with the Moto logo. Gold pin connectors are located at the bottom of the rear panel to attach modules effortlessly. We tested JBL’s Soundboost Mod, which I’ll talk about later in the review.

Overall, the Moto Z Play looks and feel like a premium smartphone from all angles with it’s all metal and glass build. My only gripe would be its wide bezels that tend to make it slippery, along with the placement of the fingerprint sensor which looks deceptively like a Home Button. 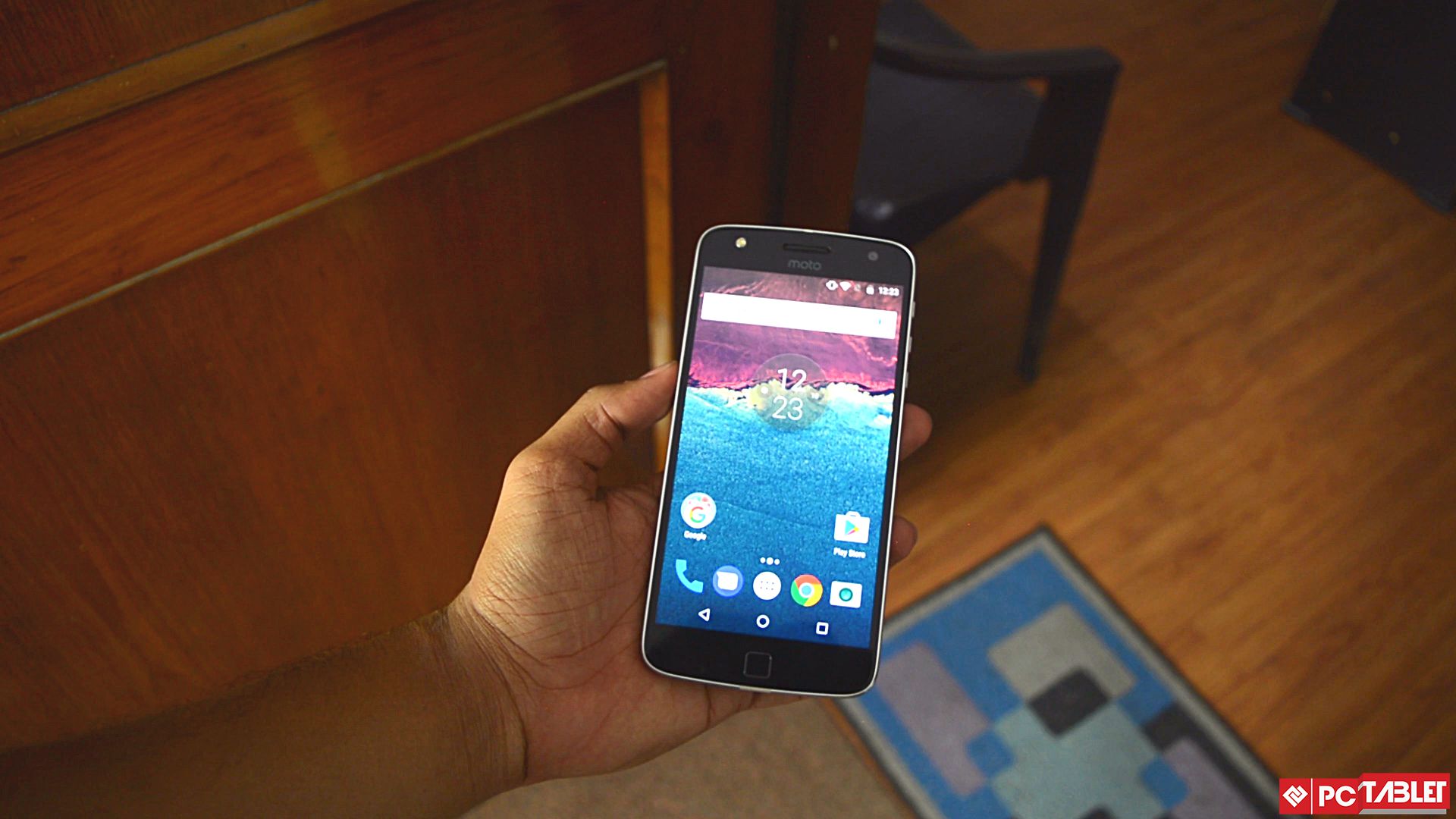 The phone gets a 5.5-inch Full HD AMOLED display with Corning Gorilla Glass 4. Viewing angles look great, and there’s enough brightness to handle bright Indian sunlight. Texts and images look crisp, and I liked display’s color reproduction in default settings. Colors look vibrant and eye-popping, and you can even tweak the display’s color settings if you’re not into vivid and oversaturated colors. The phone’s 5.5-inch screen is ideal whether you’re playing games, watching movies, browsing the web, or while editing documents and spreadsheets.

Moto Z Play looks and feel like a premium smartphone from all angles with it’s all metal and glass build.

Powering the Moto Z Play is a Snapdragon 625 octa-core processor bundled with 3GB of RAM and Adreno 506 GPU. The phone’s performance across the board is rather snappy and responsive. Apps open instantly, navigating around the UI feels smooth, and multitasking feels seamless. Though, there are signs occasional stutters while playing graphically intensive games like Asphalt 8. That said, it’s nothing substantial but does suggest the device hasn’t got enough horsepower compared to the similarly priced OnePlus 3.

Barring the occasional lag I came across while playing Asphalt 8, the device is a solid performer when it comes to everyday usage. And since some heavy Android skinning does not victimize the Moto Z Play, a lot of the phone’s smooth performance is due to its clean UI. In our synthetic benchmark scores, the Moto Z Play scored 60,545 in Antutu. While in Geekbench 4, the device racked up single and multi-core scores of 767 and 2555 respectively. 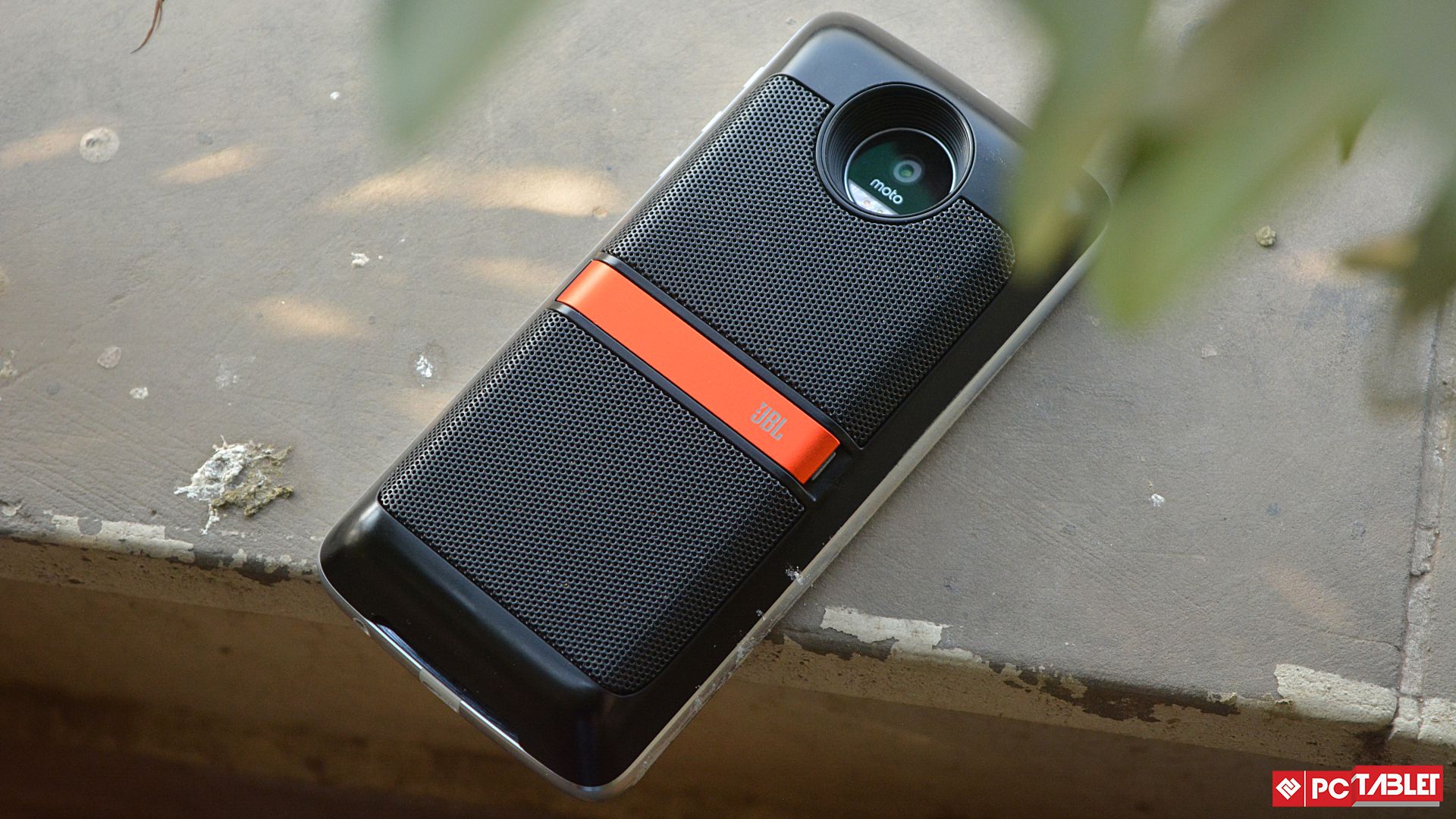 One of the MotoMods we tried was JBL’s Soundboost mod, which is probably the handiest of the lot. At Rs. 6,999, it has enough output and clarity that you would be impressed by the experience. Besides, it negates the need to carry around a bulky Bluetooth speaker along. You just need to attach the mod to the magnetic pins at the back of the device and enjoy a power-packed audio experience. While you may not find it necessary to use MotoMods with the Moto Z Play, but the ability to use these modules certainly gives the smartphone a lot more utility.

JBL’s Soundboost mod is handy and negates the need to carry around a bulky Bluetooth speaker.

The phone’s 3510 mAh battery is quite a workhorse. It can easily last a day and half of moderate to heavy usage at ease. Even the standby time on this thing is pretty outstanding. The battery meter just doesn’t seem to budge when the device is on standby. It also incorporates fast-charging technology and the device quickly tops up with the bundled charger.

Moto Z Play’s fingerprint sensor is very quick and accurate, and I faced no issues during testing as it unlocked the device every time I used it.

You get 32GB of built-in storage with the Moto Z Play, which is further expandable up to 2TB via the hybrid SIM slot. Connectivity options on the phone include Bluetooth 4.0, dual-band Wi-Fi, NFC, USB OTG and 4G. Though it lacks FM radio and VoLTE support is also not mentioned anywhere. 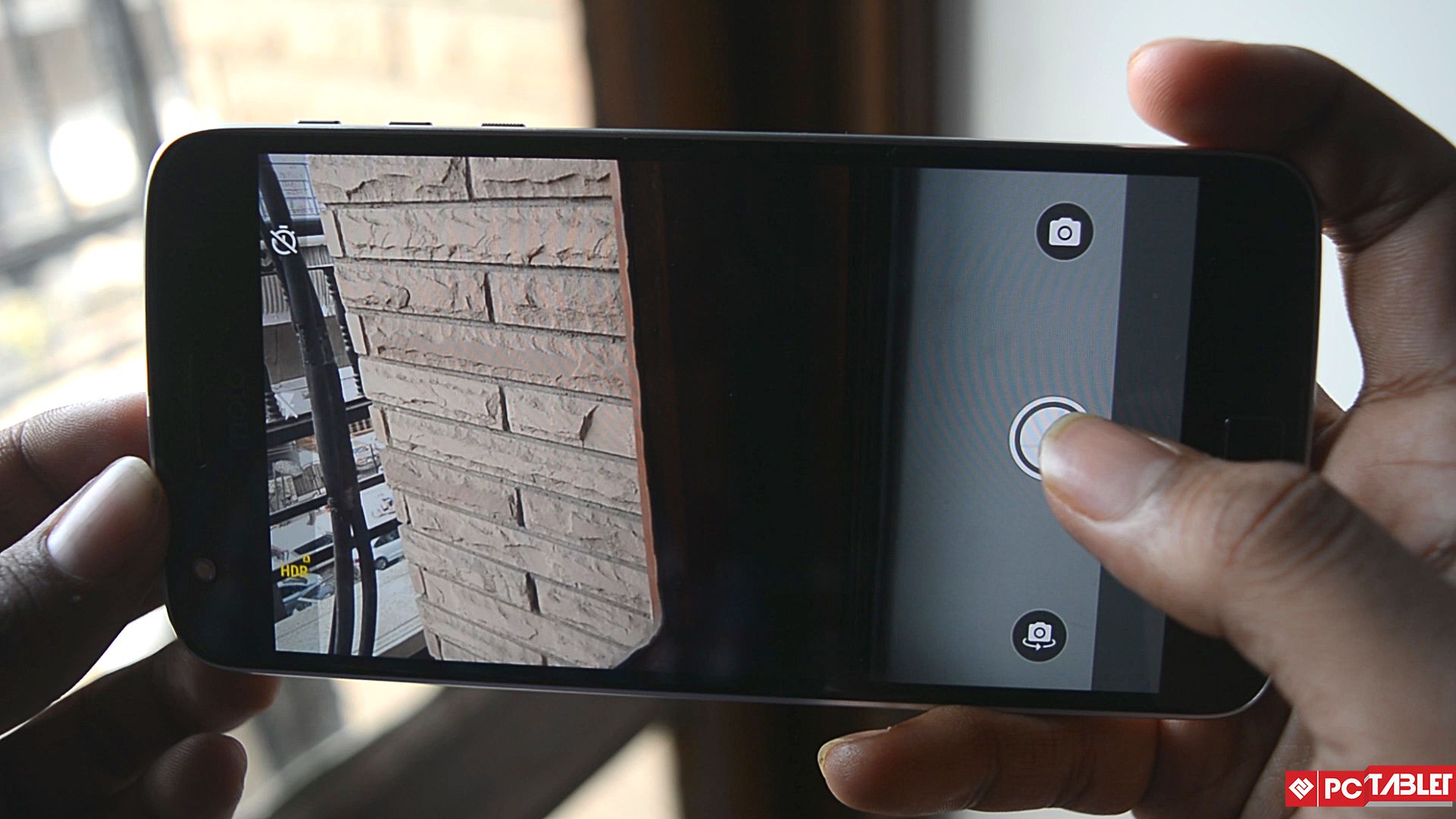 The Moto Z Play gets a 16MP primary camera with PDAF, laser autofocus, and f/2.0 aperture. Images clicked in well-lit conditions look detailed and attractive. Even color accuracy is pretty top-notch, and phone’s camera is quick and easy to use. Though it lacks OIS which makes some snaps look grainy and blurry around the edges, especially in low-light conditions. The phone’s 16MP shooter camera can be a mixed bag, but still capable of churning out some gorgeous shots with plenty of details to look at. The 5MP front-facing shooter is also capable of taking some Instagram-worthy selfies. We’ve all admired Moto phones for not fiddling around with the already excellent stock Android interface. And just like any other Moto phone, what you get with the Moto Z Play is a pure Android experience, the way its meant to be. The phone runs Android 6.0.1 Marshmallow, which remains largely untouched barring a few subtle additions in the form of gestures. For instance, waving your hand over the phone’s display wakes up the screen, showing time and notifications. While you can toggle hand gestures to activate the camera or flashlight with Moto Actions. There’s nothing much to write about the phone’s stock Android interface, which is indeed a good thing!

The more time I spent with the Moto Z Play, the more it grew on me. While credit goes to LG to launch the first modular smartphone in the form of G5, but the way Motorola has executed the concept of mods is pretty outstanding. The added functionality you get with Moto Z Play is as good as it gets. There’s a decent collection of mods available at launch, and combined with its solid overall performance and top-notch battery life, what we get is a smartphone capable redefining the segment.

At Rs. 24,999, the Moto Z Play is a rather solid overall package and not just another newly launched smartphone. The ability to quickly snap on modules certainly gives it an edge over the competition, and at the same time more functionality for the user. But then again, it can be an expensive proposition to invest in the MotoMods eco-system. If you’re looking for similarly priced alternatives, there’s still nothing better than the OnePlus 3.