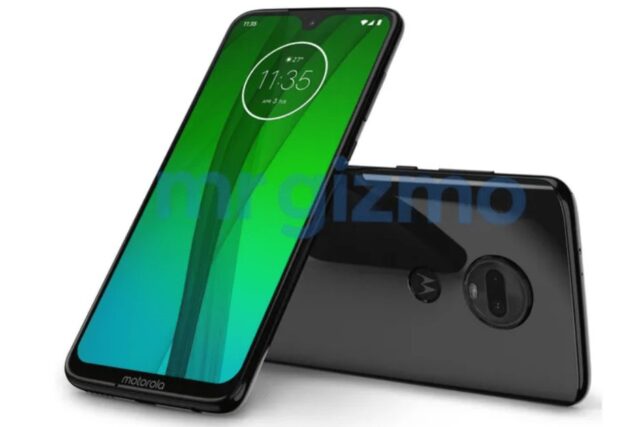 The Lenovo backed Motorola is now gearing up for the launch of its new Moto G7 series. After multiple leaks and reports, we now have an alleged press render of the upcoming Moto G7 which showcases the handset in its full glory.

As per the render posted by Mr Gizmo, the Moto G7 seems to bear a glass and aluminium construction, reminiscent of the Moto G6. The phone will now feature narrower bezels with a water-drop notch on the top as an attempt to increase screen-to-body ratio compared to the previous Moto phones, however, a small bottom chin is still persistent, with Motorola branding.

The fingerprint scanner also seems to be shifted from the front chin to the company’s M logo at the rear (embedded). The back further houses a traditional Moto-styled circular dual camera module along with with a dual tone LED flash. The power button and volume rockers are placed to the right while the speaker grill, USB Type-C port and a 3.5mm headphone jack reside at the bottom.

As far as the previous leaks are concerned, the Moto G7 is tipped to come with a large 6.4-inch display having Full-HD+(1080×2340 pixels) resolution and 19:9 aspect ratio.

Under the hood, it will be reportedly powered by Qualcomm Snapdragon 660 AIE SoC, coupled with 4GB of RAM and 64GB of internal storage.

For photography, the G7 is speculated to come with a dual 16-megapixel + 5-megapixel camera setup at the back along with a 12-megapixel shooter at the front for selfies; exact camera specs are yet to be known. Furthermore, it will be backed by a 3,000 mAh battery with Motorola’s Turbo Charging support and likely run on latest Android 9 Pie out of the box. It is also speculated to incorporate 10W Wireless charging support and if you’re not aware, Moto will soon be coming out with a wireless charger as well.

The Moto G7 is expected to land in the market by the beginning of next year, most probably at MWC 2019 in Feb along with its siblings, i.e. Moto G7 Play, G7 Plus and G7 Power. Stay tuned.