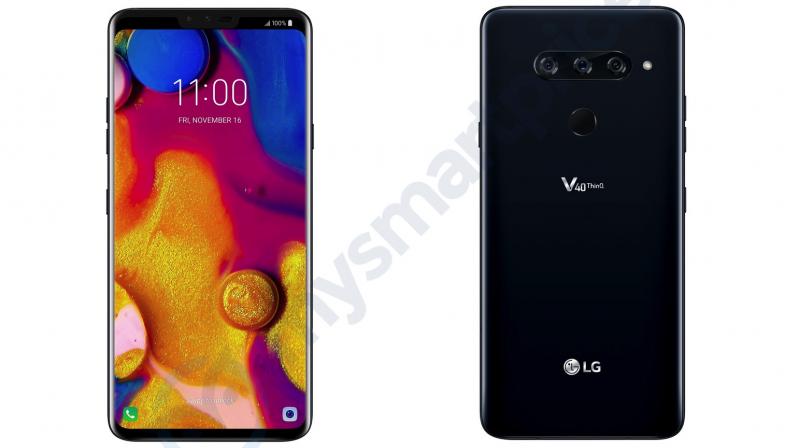 The upcoming LG V40 ThinQ smartphone is expected to launch sometime in November. However, renders of the handset are now doing rounds on the web revealing the V40 ThinQ in its full glory.

The latest leaked press render shows off the smartphone’s front and back. As we can see, the front is dominated by a slightly curved, bezel-free display. The handset is expected to get a P-OLED display. And just above the display, you can see two cameras and the front speaker, whereas the power key is on the right and volume rockers are on the left. The leak further tips at the presence of USB-Type C port and a 3.5mm jack at the bottom.

Turn to the back, and we can see the horizontally stacked rear camera module – housing three cameras and an LED flash. The fingerprint sensor can also be seen right below the primary camera module. Besides, the back also has the LG logo as well the model name of the handset.

Elsewhere, the LG V40 ThinQ is expected to get powered by the Snapdragon 845 chipset and run Android 9 Pie right out of the gates.

Going by the latest leak, it appears the triple camera setup will be one of the key attributes of the LG V40 ThinQ. The company is apparently trying to differentiate its upcoming flagship offering by adding an extra lens to the mix. LG’s earlier flagship launches this year did not perform well given their lacklustre sales. Hence, LG must try something else with  the V40 ThinQ to bolster their sales and compete with other top-end handsets in the market.

As far as release goes, the time and date mentioned in the latest press render suggests the LG V40 ThinQ might go official on November 16, 2018. That being said, one can’t stand by that claim as launch dates tend to change, hence we can’t be sure whether the handset will indeed be unveiled on the aforementioned date. More details about the handset are likely to surface in the near future, as we approach the handset’s official launch. We’ll update you as soon as we hear anything new. Until then, keep checking back for more.