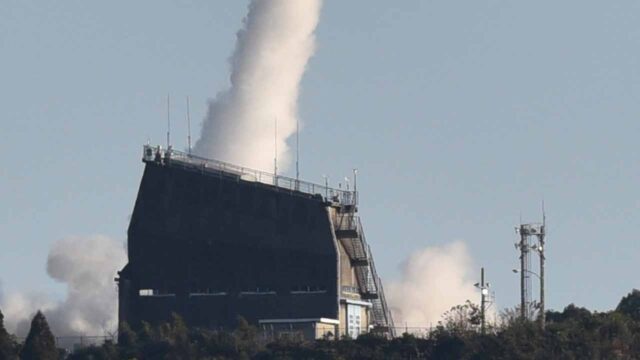 A Japanese SS-520 rocket which took off from the Uchinoura Space Center at 8.33 am had to be aborted in mid-flight after it hit a snag in the second stage. The redundant rocket fell in a designated safe area in the sea.

The small rocket, about the size of a power pole, lifted off in what was described as a perfect launch and soared into the sky from the Uchinoura Space Centre in southern Kagoshima Prefecture. The first stage performed flawlessly. However, the rocket stopped sending data shortly after liftoff. Mission control after trying to re-establish contact unsuccessfully ordered the mission to be aborted.

The SS-520 rocket is regarded as one of the smallest units in the world which carry small satellites to space. The rocket was carrying as 6.6 pounds “Tricom-1” satellite which was an observation satellite. The mission was aborted 20 seconds after lift-off.

In a statement, the agency said that the first stage performed flawlessly. However, contact was lost 20 seconds after liftoff. After command had been given to abort the mission, the rocket plummeted to a designated spot in the seas off the coast of South East Japan without causing any mishap or loss.

Japanese Space Agency will shortly give a detailed account of what went wrong and the rocket launch was unsuccessful. The Japanese Space Agency has a pretty robust space program. It has contributed to the building of the ISS. It also conducts resupply missions to the ISS. It has also drawn up a Lunar Exploration program to the moon and has robotic and human missions to the moon. It is planning to send a lunar lander and rover to Moon in 2017 which will help to unlock the secrets of the origin of Moon. The ultimate aim is to set up a lunar base where Japenese crews will stay for prolonged missions and future deep space odysseys.