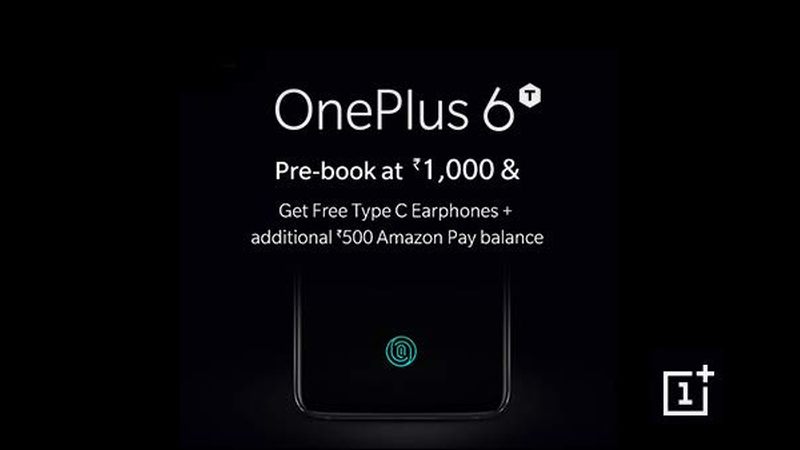 OnePlus 6T is all set to go official on October 30 at an event in New Delhi, the company confirms. As expected, fans will able to watch the livestream via OnePlus social media platforms.

In addition, OnePlus is also giving its fans the opportunity to witness the unveiling of the OnePlus 6T in person. The company is putting tickets for the live event on sale which will be available on October 17 at 10am.

The Chinese smartphone maker also confirmed that OnePlus 6T is now open for pre-bookings in India via Amazon. In order to pre-book the upcoming flagship, interested buyers will have to purchase an Amazon e-gift card. Just follow the instructions on the Amazon India page and select the OnePlus 6T ‘Design’ and the INR 1,000 denomination. The gift card will be then be emailed to users who’ve purchased the Amazon Pay Email Gift Card. Sales of the handset will begin on November 2nd, starting 12pm.

The company has been teasing the upcoming OnePlus 6T for a while now through its social media channels. Some of the highlights of the device will be an in-display fingerprint scanner, a feature the company has dubbed as ‘Screen Unlock’. The company also revealed it has ditched the classic 3.5mm jack, which is why it has introduced the latest USB-Type C bullets earphones. Besides, it will sport a waterdrop-styled notch display and will pack a larger 3,700mAh battery.

As per earlier leaks, OnePlus 6T is expected to come with a 6.4-inch Optic AMOLED full-HD+ display. Under the hood, the device is rumoured to get powered by Qualcomm Snapdragon 845 coupled with either 6GB or 8GB RAM and up to 256GB of built-in storage. Also, the flagship is expected to run Android 9.0 Pie out-of-the-box.