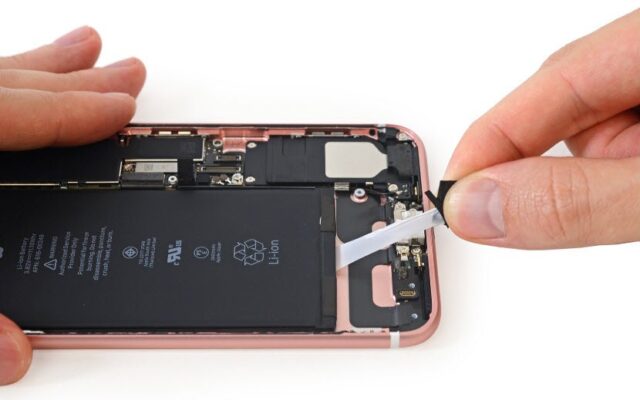 Apple iPhone 7 Plus teardown, performed by iFixit reveals a larger Taptic engine and an enhanced battery of 2900mAh. The corner of the handset consists of the Taptic Engine, which looks bigger than the iPhone 6s Plus. It makes sense since the newly integrated Home button makes the handset vibrate when you push it.

The team at iFixit has managed to open the portion where the headphone jack is usually located. The first fact they noticed is that the Apple didn’t provide any room for the 3.5mm port. They also spotted an army of courageous Tri-point screws guarding the cable bracket that covers the battery connector and two of the display cables.

iPhone 7 Plus opens to the side

Despite the familiar clips at the top of the phone, the iPhone 7 Plus opens to the side. However, iFixit didn’t alter the display cables located along the middle-right side due to slack in the top cable.

The iPhone7 Plus teardown also revealed several black and white gooey adhesives running along the perimeter of the phone.

We can now conclude that the handset will be able to provide extra one-hour backup as claimed by Apple on the iPhone 7 product page.

The big advantage of teardowns is that it reveals certain interesting facts. When the iPhone 7 Plus was opened by iFixit, the dual rear camera was seen as a single module instead of two separate sensors. The module rests on the biggest exterior bump that’s now infused inside the chassis itself. This is to prevent any possible damage due to water and dust. To recall, iPhone 7 and iPhone 7 Plus sips with water-resistant features.

In addition to the above revelations, the team at iFixit also noticed that speaker grills are not found connecting anywhere. Moreover, they also spotted the new third eye in the camera array of the iPhone 7 Plus.

The newly added lightning connector port was surrounded by the two familiar screw guards. The adhesive strip which seals the iPhone 7 Plus is considered stronger than the strip found in iPhone 6s. According to analysts, this is the sign of integration of the water-resistant feature.

iFixit, which is well known for performing teardown of gadgets, has given the recently launched iPhone 7 Plus the same treatment it gave to its previous counterparts. Currently, iFixit has completely opened the iPhone 7 Plus, which clearly reveals several stunning facts about the internals of the new Rose Gold color variant of the handset.