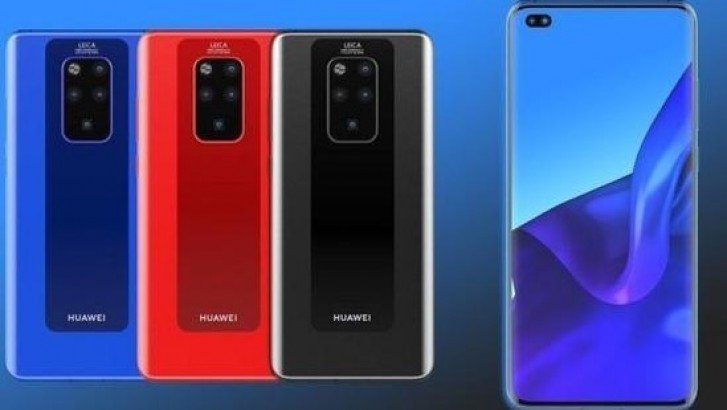 Huawei has been continuously winning the hearts of consumers since its last two flagship generations. While we already witnessed the initially leaked Huawei Mate 30 Pro specs, this time, the device has made its way through the leaked renders.

According to the alleged Huawei Mate 30 Pro renders, the device will sport a curved display, just like the Mate 20 Pro and the recently launched Huawei P30 Pro. The phone looks identical to the Samsung Galaxy S10+ from the front, with a punch hole in the upper-left corner to accommodate dual selfie cameras.

Coming to the back, the Mate 30 Pro seems to have quad cameras alongside an LED flash in a V-shaped formation. The camera setup is said to offer 5x optical zoom and 50x digital zoom, similar to the P30 Pro.

Furthermore, the renders reveal that the upcoming flagship will arrive in at least three colour variants. This will include a “Classic Blue” version with a gradient rear and a “Red” option with semi-frosted back. There’ll also be a “Black” variant for those who love simplicity.

Note that there’s no surety on whether the renders are accurate. Hence, we recommend taking the leak with a pinch of salt. Having said that, let’s now talk about the previously reported Huawei Mate 30 Pro specs.

Starting with the display, the Huawei Mate 30 Pro will offer a 6.71-inch AMOLED panel, sourced from BOE. The panel will also bear an in-display fingerprint scanner and is likely to come with a Quad-HD+ resolution.

Under the hood, the phone will get powered by the 7nm-based Kirin 985 SoC with the Balong 5000 5G modem for 5G support. There’ll also be a 4G model for those who don’t want to spend extra on 5G.

All of this will be backed by a 4,200mAh cell. Interestingly, this time, the company will be bumping its SuperCharge technology from 40W to a whopping 55W. Additionally, the phone will support wireless charging, accompanied by a faster 10W reverse wireless charging. Note that the current Huawei flagships offer a speed of up to 5W while charging other devices wirelessly which is quite slow.

Given that the Huawei & Google tie-up is in danger due to US-China trade war, we can expect Huawei’s own Hongmeng/ Ark/ Oak OS (whatever they name it) on board. There are also reports of Huawei considering Russia’s Aurora OS (a fork of Sailfish OS) as an option. Nonetheless, we expect everything to settle down soon given the fact that Google itself is upset with the Huawei ban.

While these are just the initial leaks, we still have a whopping five months to go for the Huawei Mate 30 Pro launch. As usual, the company will unveil the new Mate-series in October, later this year. Till then, stay tuned.