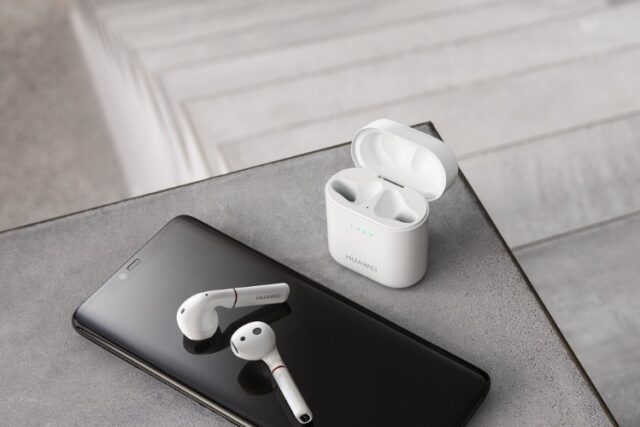 With the removal of 3.5mm headphone jack from smartphones, people are slowly moving towards the wireless trend. Then again, the typical wireless earphones are gradually being replaced by truly wireless offerings. Now, Huawei too has stepped into the game with by launching Huawei FreeBuds 2 Pro in China.

To recall, the Huawei FreeBuds 2 Pro were first leaked with the Huawei Mate 20 Pro and were expected to launch with the same. Unfortunately, nothing as such happened during the event. Later, the sub-brand Honor came up with its Flybuds hinting at a further delayed arrival of the former.

The given case also supports Wireless charging. A dedicated wireless charger or even the Mate 20 Pro with “Reverse Wireless Charging” enabled can charge the case wirelessly.

As for the technical aspects, these earbuds incorporate 13nm drivers, backed by Bluetooth 5.0. Each earbud gets two (4 in total) microphones for enhanced ambient noise cancellation.

Huawei is also touting the presence of new Bone conduction technology which smartly understands the bone sound pattern of whoever is speaking into them. It will allow the user to utilise his/her voice for biometric authentication on compatible services and payment gateways like Alipay and WeChat Pay.

Moving on, the Huawei FreeBuds 2 Pro have also undergone thorough reliability tests. They are claimed to be suitable for 10,000 plugs/ unplugs while the function key will easily last for 10,000 presses. Though on a slightly expensive side, these earbuds are indeed a remarkable piece of innovation.

Priced at CNY 999 in China (roughly Rs. 10,400), the Huawei Freebuds 2 Pro can be purchased from Vmall, Tmall, Sunning.com, and JD.com. The company is yet to announce its availability for the Indian market. Stay tuned.