Home News Honor 20 Pro to be the world’s first phone with f/1.4 camera

Huawei’s sub-brand Honor is all set to unveil the Honor 20 series in London on May 21. The line-up will comprise Honor 20 Pro, Honor 20 and Honor 20 Lite smartphones. That said, the companies president showcased a few Honor 20 Pro camera samples which suggest the presence of an f/1.4 lens on the device.

Notably, President Zhao Ming, today, has revealed three new sample photos taken from Honor 20 Pro. With amazing pictures, Zhao touted the ability of the device to capture pictures in low-light conditions. Two of them were taken with the primary 48MP sensor using the new AIS Super night mode. The third one, on the other hand, was shot on the ultra wide-angle lens.

Upon extracting EXIF data from the pictures shot on the primary sensor, it seems the Honor Pro 20 will be the world’s first smartphone to have an f/1.4 aperture lens. Besides, the ultra-wide-angle camera’s EXIF shows f/2.2 aperture and 17mm focal length. The listed focal lengths also confirm the size of the sensor of the ultra wide cam i.e. the 7.6x crop factor matches to a 1/3.2″ sensor.

In the meanwhile, another teaser pushed by Honor’s official Weibo handles confirms the presence of quad cameras on the upcoming device. Notably, there will be dual vertical strips on the rear side. One will house a triple camera module and the other will occupy a ToF (Time of Flight) depth sensor and an LED flash.

That said, the large aperture will not only help the camera to capture more light in low-light. Additionally, it’ll also help in noise reduction, improving the overall quality of photos. As for now, Zhao revealed the company has already sent Honor 20 Pro to DxOMark for rating. 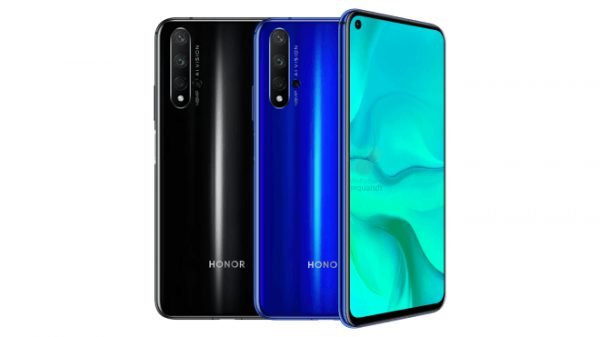 As far as the specifications are concerned, the Honor 20 Pro is said to get a 6.26-inch IPS display with the resolution of 2340 x 1080. The panel will come with a punch hole for the selfie camera and will offer a pixel density of 412ppi.

Under the hood, it’ll be powered by HiSilicon Kirin 980 chip, coupled with 6GB RAM and 128GB of internal storage. Its punch-hole display will reportedly house a 32MP sensor on the front for selfies. Whereas, the back will boast of a Quad Camera setup. The unit would comprise of a 48MP Sony IMX586 primary sensor paired with 12MP Super Wide Angle camera, a 2MP depth Assist Camera, and another 2MP Macro camera.

Note that Honor has already confirmed that the phone will feature a 48MP AI Ultra Clarity mode (as seen on Honor View 20), accompanied by the AI photometric system.

There won’t be any in-display fingerprint scanner. Instead, it’ll get a capacitive one at the side in power button. Lastly, the device will be powered by a 3750 mAh battery with 22.5W SuperCharge fast charging support. It is likely to be available in Midnight Black and Sapphire Blue colours at launch.

The Honor 20-series will be unveiled on May 21 at London, followed by China. Whereas, the India launch will be held later on June 11 and the company has already sent out media invites for the same.