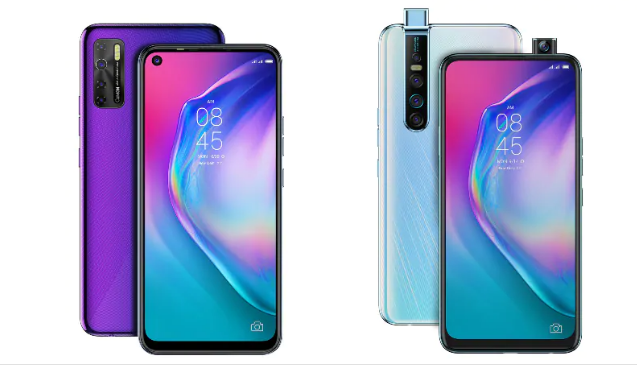 Tecno has now refreshed its Camon series in India with the launch of Teco Camon 15 Pro and Camon 15 smartphones. Both the devices come with quad-camera setups and offer massive batteries. The Pro model flaunts a pop-up selfie camera while the latter settles with a punch-hole display. Let’s have a detailed look at the specifications and pricing of both the devices.

Being expensive of the duo, the Tecno Camon 15 Pro comes with an all-screen front and a pop-up selfie camera. It gets a 6.53-inch Full HD+ display that has a screen resolution of 2340 x 1080 pixels. Furthermore, the panel has a maximum brightness of 480 nits and flaunts a 91.2 per cent screen-to-body ratio.

Powering the phone at its core is a 2.35GHz octa-core MediaTek Helio P35 processor along with 6GB of RAM and 128GB of internal storage. The latter can be expanded up to 256GB using microSD card.

For photography, the Camon 15 Pro gets a total of four cameras at the rear. The setup comprises of a 48-megapixel primary lens, a 115-degree 5-megapixel ultra-wide-angle lens, and QVGA depth camera. It also has an Ultra Night Lens supported by f/1.79 large aperture and DSP chip to help take more light in night photography. For selfies, there’s a 32MP pop-up camera upfront.

On the software front, the device runs HiOS 6.0.1 based on Android 10. A 4,000mAh battery backs all of this. The phone supports face unlock and also gets a fingerprint scanner at the rear. Connectivity options onboard include dual 4G VoLTE, WiFi, Bluetooth 5.0, GPS, dual-SIM and a micro USB port.

Under the hood, it gets powered by an octa-core processor coupled with 4GB RAM and 64GB of internal storage. Exact information on the chipset is yet to be known. Just like the Pro model, the room can be expanded up to 256GB via a microSD card.

In the optics department, the device gets a 48-megapixel camera, paired with 5-megapixel wide-angle lens, 2-megapixel macro lens and Ultra Night Lens supported by DSP chip. For selfies, there’s a 16-megapixel shooter housed in the punch-hole.

The Pro model will be available in Ice Jadeite and Opal White colour options, while the Tecno Camon 15 will be sold in Shoal Gold, Fascinating Purple and Dark Jade colour options. As a part of the launch, the company is also offering free Bluetooth speakers worth Rs. 3,499 with the Camon 15 Pro.

How to Recover Deleted Files from a Memory Card Easily?