Google will soon launch the new Google Search Lite app for regions with a low-speed internet connection. The app is still in experimental mode and not available on Google Play Store. The company is still testing the app and still in testing mode in Indonesia and will soon come to India as you can see the Hindi as a language option in the screenshots.

As reported by Android Police, the app has first appeared on Facebook as an ad for many users. Those users who clicked on the link got an invitation to download the app and try it first. The Google Search Lite has its own data saver built right in to save the data.

The app is not available on Google Play Store to download, but it will soon be announced by Google when it will be launched in India. The app will be listed after Google is satisfied with the results in Indonesia and might come to India in beta mode. This app also supports offline feature for no connection regions to seamlessly search there. This app supports four apps by now; Indonesian, Hindi and two more Indian languages, as Google has recently rolled out support for eight more Indian languages. The app has a beautiful and clean user interface with Google logo on the top and search bar at the very bottom. 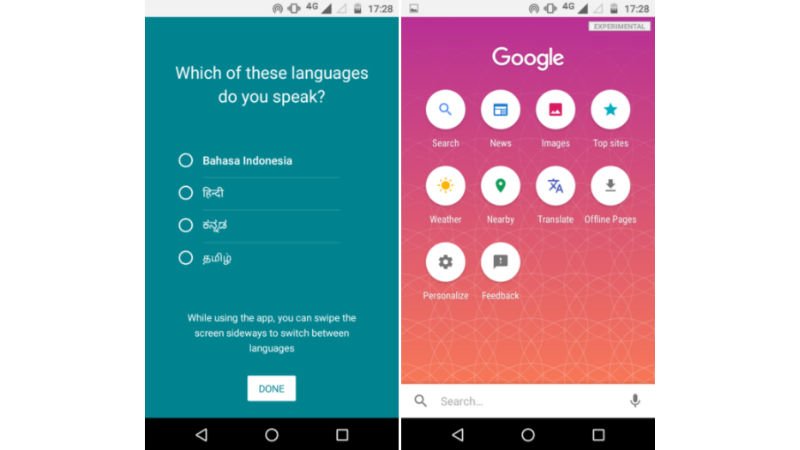 The app has shortcuts to various Google services; search, news, images, top sites, weather, nearby, translate, offline pages, personalize and feedback. The search bar also supports voice searching by tapping the mic button. You can read offline some pages so you can read them later in regions where the data connection is not available.

Facebook previously released its Facebook and Messanger Lite app for India all because of the same reason as Google. Google already provided free high-speed WIFI in India and the Google Search Lite app is also not far from being launched.