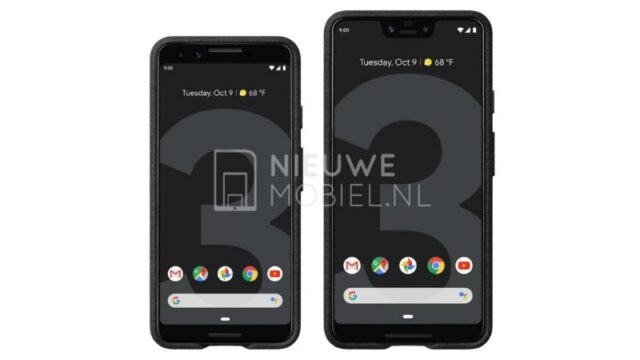 Google Pixel 3 and Pixel 3 XL are expected to launch at an event on October 9. The company sent out invites for the event earlier this month. We’ve already come across several leaked images of both upcoming Google flagships in the past. Now, a new set of press renders of these devices have surfaced on the web.

The latest renders give us a good look at the rather chunky notch on the plus-sized Pixel 3 XL, while its smaller sibling is seemingly deprived of the notch. Besides, we can only see a single lens primary camera setup on both the devices, with the fingerprint sensor housed just below the primary camera unit.

According to the latest report, the Pixel 3 will feature a 5.4-inch display while the larger Pixel 3 XL will come with a 6.2-inch screen. As already mentioned, the back of the handset show single lens cameras on both handsets, though we can see dual selfie cameras on the front. Rumour has it that dual front cams could be powering a new generation facial recognition technology, apart from offering great selfie shots in varying lighting conditions.

As per earlier leaks, the Pixel 3 range will come with Snapdragon 845 processor bundled with 4GB of RAM. Besides, the larger Pixel 3 XL is expected to pack a 2915mAh battery.

Nothing is official for now, but new leaks are starting to line up with previous leaks. We’ll know more when Google officially unveils the Pixel 3 and Pixel 3 XL at an event in New York on October 9. More leaks are likely to surface as we near the official launch. We’ll update you as soon as we hear anything new. Until then, keep checking back for more.