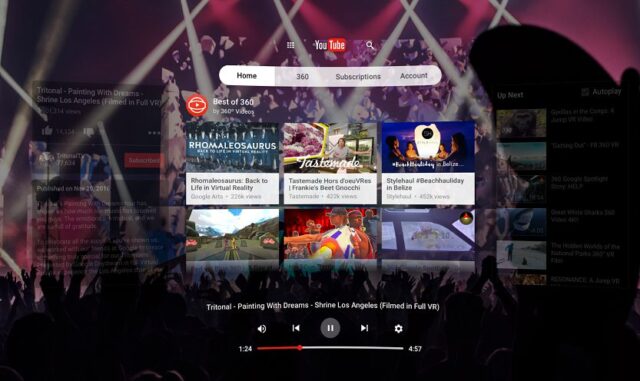 Google launches the new YouTube VR app which is now available for download on the PlayStore for free. The app is compatible with devices  running Android 5.0 Lollipop or later.

YouTube VR comes following the debut of the Google  DayDream VR headset that went on sale earlier this week. Google has been pushing virtual reality across its services and devices for quite a while now. And it seems the company’s entire VR ecosystem is complete with the launch of Google DayDream VR headset, Pixel and Pixel, XL smartphones., alongside the latest YouTube VR app.

With YouTube VR , users can essentially enjoy YouTube videos in an immersive 360-degree format with VR-ready headsets such as Google DayDream. Apart from being able to watch 3D VR videos, users can also watch videos in standard format. Videos in standard format which are not VR-ready will be shown through the app’s Theatre Mode. Browsing and other video-related actions such as searching or subscribing would be done through the keyboard or via voice commands. Moreover, the app also allows users to browse and watch videos simultaneously.

To further add the overall VR experience, the YouTube VR app also has a built-in spatial audio feature, which offers varying levels of sound depending upon the  direction the user is looking. Currently, the app only supports the Google DayDream VR headset which costs $79. However, Google plans to bring it to other VR platforms as well in the near future.

Also, starting this month, users will be able to watch a 9-part NFL series in 360-degree on YouTube VR with Google’s DayDream VR headset. The debut episode launches on November 24 (Thanksgiving Day), on NFL’s YouTube channel. Viewers gain exclusive access to Philadelphia Eagles defensive strategy along with the opportunity to get up close with the Eagles bench and sideline on game day.