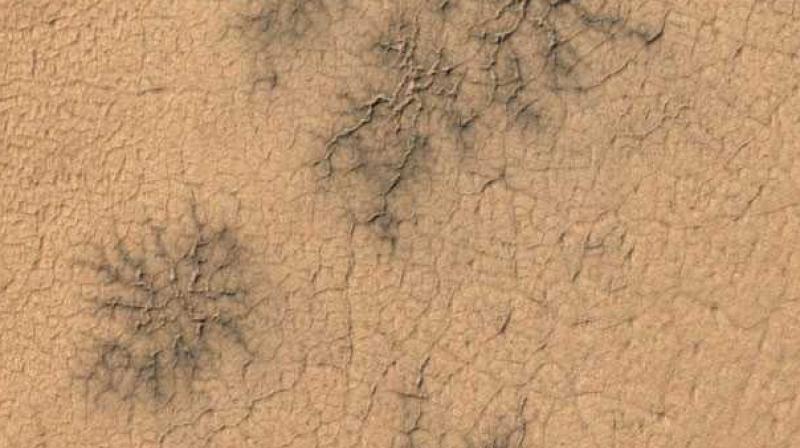 A team of experts, including as many as 10, 000 citizen scientists has succeeded in discovering a landfall on the Martian surface, which is astronomically called “Spider.” The landfall is determined in a region of it believed not be existed. The discovery is made by unpaid assistant scientists who were working for ‘Planet Four: Terrains’, an online mission hosted by Zooniverse, which is the largest and most popular audience-powered research platform of the world.

The Martian landfalls are named as ‘spiders’ due to their arachnid-like shape and appearance. They are a particular kind of land corrosion where hosts of fractures start forming on the Martian soil, which is entirely different to everything on Earth. According to the researchers at the Oxford University in the UK, these unusual features are scientifically named as Araneiform. They turn up at the South Pole of the Red Planet and start getting spider-like figures when the carbon dioxide converts into ice during the winter season on Mars. As added by researchers, as the seasons on Mars alter, direct sunbeams go through the transparent ice, hence warming up the land beneath the Martian soil.

The land surface of Mars then gets windswept as the carbon dioxide races out and overcharges the small little of Martian dirt, resulting in the formation of skinny branches which look like the legs of a spider. The features of this bizarre structure were earlier believed to be only presented in a province called the South Polar Layered Deposits (SPLD) of Mars, where the layers of dust and water ice banded. But the latest study has confirmed that the spiders can also be turned up anywhere on the planet.

Highlighting in the research paper, published in the journal Icarus, the citizen-science volunteers have claimed that they have detected the formations of the spider in several other polar surfaces of Mars where they believed not to be present. The sightings of the spiders were later verified through the high-resolution imaging, clicked by High-Resolution Imaging Experiment or HiRISE camera aboard the Mars Reconnaissance Orbiter of NASA.